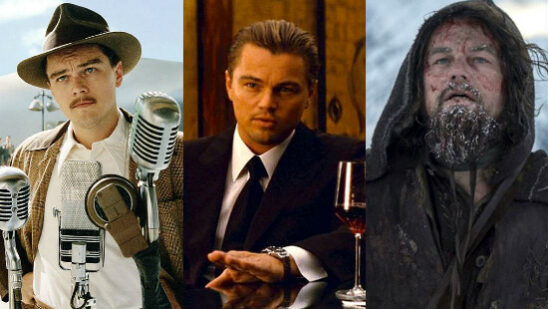 Until very recently, the blue-eyed American actor and producer, Leonardo Wilhelm DiCaprio, had always remained just one step short of an Oscar to his name. Much to the disappointment of his huge fan base, luck didn’t favor him even with countless Oscar nominations to his name. All hell broke loose on social media when the Los Angeles-born Leo finally got his much-deserved Academy Award for his role in The Revenant (2015). As they say, fortune favors the brave. With his dashing looks and intriguing demeanor, Leo has been a part of some of the best movies ever produced. Following are the 15 best Leonardo DiCaprio movies of all time: 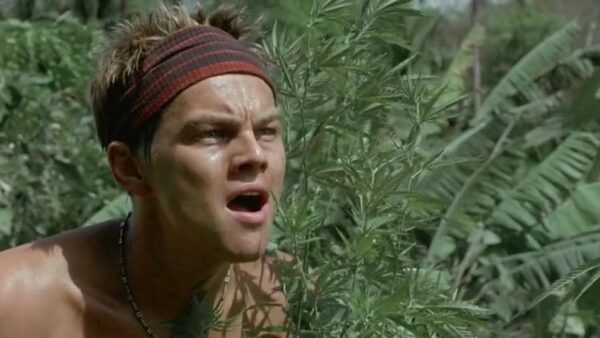 Director Danny Boyle’s drama genre flick is based on a novel by Alex Garland. The lead character of the story is a young man played by none other than Leonardo DiCaprio.

Richard, in his twenties, is hooked on nicotine and a fan of video games and Vietnam War movies. Richard is in Bangkok and finds a strange map that is said to lead to a beach – a paradise with the lifestyle he desires. 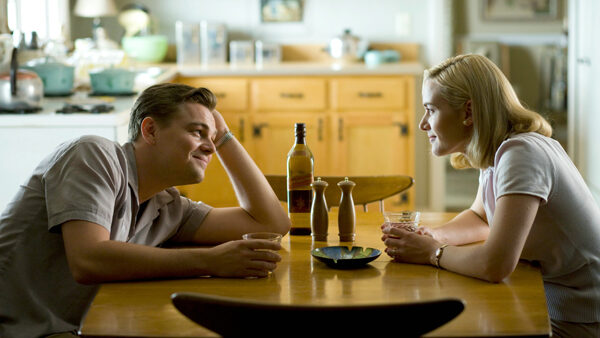 With a great history of on-screen chemistry, and one of Leonardo DiCaprio’s most famous movies in which he stars opposite Kate Winslet. The movie is directed by Sam Mendes and is based on a novel by late American fiction writer, Richard Yates. The story is set in the 1950s and revolves around a young couple facing personal problems while raising two kids.

The talented duo gives intense performances as Kate Winslet wins a Golden Globe while Leonardo DiCaprio is nominated for one. The movie was also nominated for 3 Oscars in different categories. 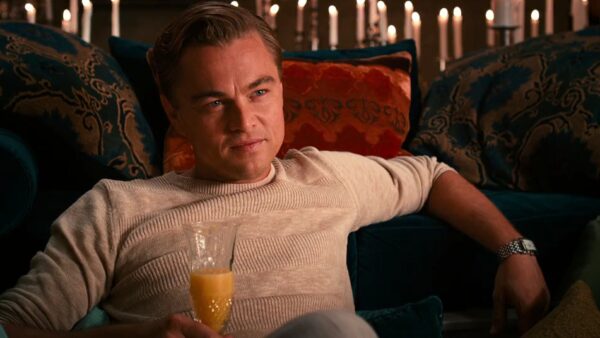 The movie adaption of a classic novel is always a tough job especially when the writers and directors need to alter things in the plot. Baz Luhrmann takes this daunting task and comes out strong, doing a commendable job with his adaption of Fitzgerald’s novel.

Luhrmann has a stellar cast up his sleeve with the likes of the versatile Leonardo DiCaprio, the stunning English actress Carey Mulligan, and Tobey Maguire of Spiderman fame.

DiCaprio takes the central role of Jay Gatsby, a rich, lavish party lifestyle millionaire who happens to be Nick Carraway’s (Tobey Maguire) neighbor. Maguire is the narrator of the story, his account of how he fell into depression. Inspired by Jay Gatsby and through many plot twists, Nick finally sees the clear picture once the dust has settled.

The Great Gatsby is only an illusion, created to impress and win his old love, Nick’s beautiful cousin Daisy, who’s married to Tom Buchanan – a crude, rough man. The movie won 2 Oscars in costume design and production design categories. 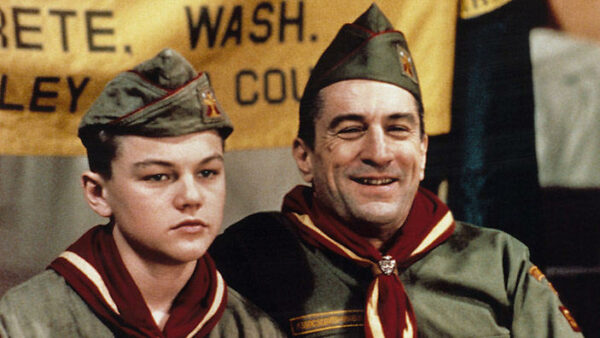 Leonardo DiCaprio’s second venture in the film industry was along with the revered actor Robert De Niro. Directed by Michael Caton-Jones, this biopic is another book adaption from the famous American writer and professor of literature Tobias Wolff. It is based on a true story about a mother and her young boy who settles in Seattle and the mother marries a mechanic.

Circumstances test them both thoroughly as the mechanic is an alcoholic and abusive while the young boy seems to hang in the wrong people. The hope of escaping the town one day is what keeps the boy going, bearing his abusive father. The character of an abusive father is played by the talented Robert De Niro while Leonardo DiCaprio takes the stage as a young boy named Toby. 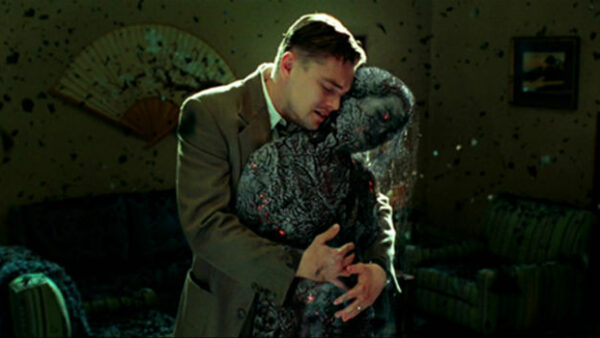 Martin Scorsese’s Shutter Island is one of the very best mystery movies of all time and makes it into IMDB’s top 250 movies of all time list. This critically acclaimed adaption of Dennis Lehane’s novel is set in a gloomy, ominous atmosphere on an island, a facility for the criminally insane.

U.S Marshall Teddy Daniels (Leonardo DiCaprio) and his partner Chuck (Mark Ruffalo) arrive on the island to investigate the disappearance of a patient from the hospital. Denial of access to patient records and the head of the hospital Dr. Cawley’s menacing, evil smile all point to the same conclusion – something sinister is underway at the hospital.

As Daniels tries to dig deep, his old demons and memories start to haunt him. Arguably the best part of the movie is its ending, leaving it to the viewer’s imagination whether Daniels really ever existed. 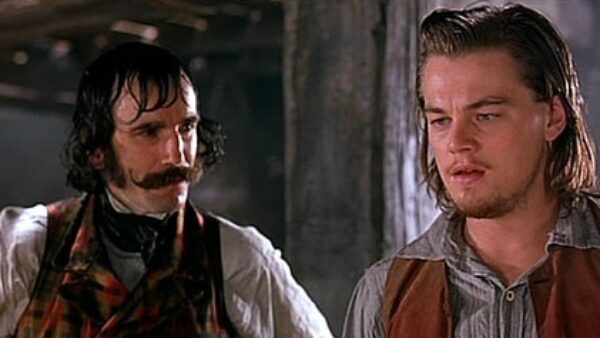 Set in the civil war era, this is another Martin Scorsese direction based on a story by Jay Cocks. With Martin’s expertise and a star-studded cast featuring Leonardo DiCaprio, Cameron Diaz, Liam Neeson, and Daniel Day-Lewis, the movie was bound to be a box office success as well as in the awards category, getting nominated for 10 Oscars in different categories.

Leo dons the role of Amsterdam Vallon, whose father was killed in a gang fight before his eyes. Some years later, he is back in the Five-Points district in New York to avenge his father’s death from Bill The-Butcher. Scorsese deserves full credit for recreating the civil war era, showing the bloodied society in a state of anarchy, riots, and rule of might. 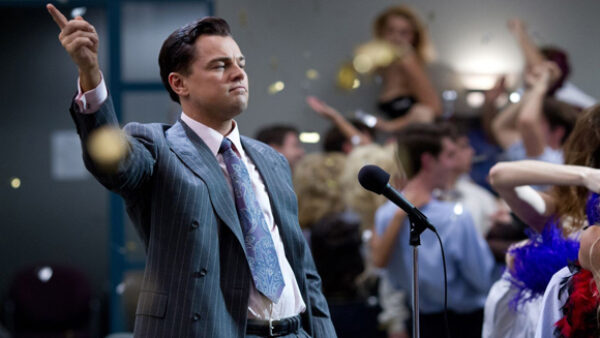 Leonardo DiCaprio and Martin Scorsese’s actor-director partnership has been a strong one. The duo comes together yet again, this time for a comic biography based on the life of Jordan Belfort, showing his rise through the ranks of stockbrokers, reaching the Richie-rich lifestyle, and finally getting involved in corruption.

The movie has received high praise from critics, making it into IMDb’s top 250 movies all-time list. It also has five Oscar nominations to its name, including one for the lead actor Leonardo for his superb impersonation and acting skills as Jordan Belfort along with a nomination for Martin in Best Achievement in Directing category. 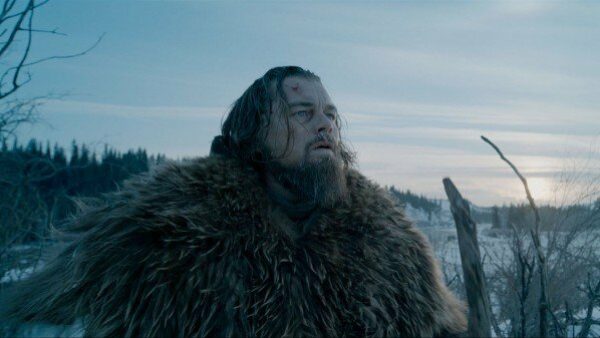 The movie that provided DiCaprio the much-awaited and deserved break – winning an Academy Award. Directed by the Mexican Alejandro G. Inarritu, The Revenant is based on a novel by Michael Punke by the same name.

DiCaprio plays the lead role of Hugh Glass, a frontiersman who faces a survival crisis after getting mauled by a bear while his own men deserted him for good. DiCaprio’s brilliance makes the viewer feel the desperation of his situation without words. His expressions convey much more than just his state, making his feelings almost tangible. 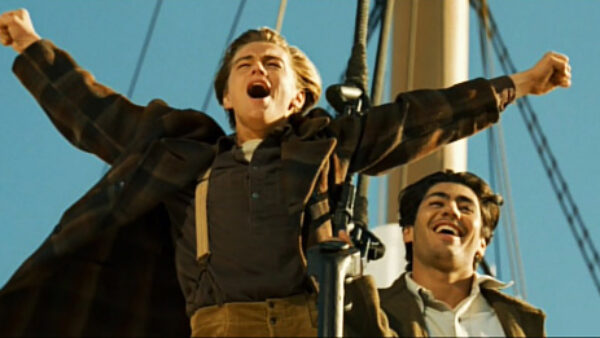 Grossing a gigantic $2.2 billion at the box office worldwide, James Cameron’s writing and direction is one of the best and most successful romantic flicks to ever have been made, one that still makes the number one movie date for Romeos and Juliets out there. Titanic is a story of unexpected love aboard the biggest ship of its time that was said to be indestructible.

The movie stars a young DiCaprio as the poor artist and the pretty Kate Winslet as the daughter of a rich aristocrat who falls in love with each other, ultimately leading to a tragic ending as the huge ship sinks. The movie won 11 Academy Awards in different categories, including a nomination for Kate Winslet as Best Actress in a lead role and a Golden Globe nomination for Leonardo DiCaprio. 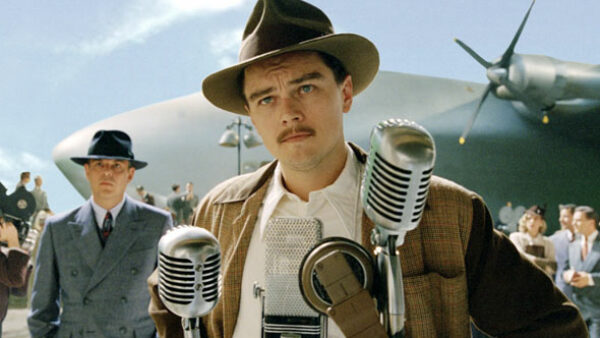 This is another successful project undertaken by the talented actor-director duo, Leonardo DiCaprio and Martin Scorsese. The movie is based on the life of the renowned American business tycoon, aerospace engineer, and filmmaker Howard Hughes, from the 1920s to 1940s, the prime years of his life.

DiCaprio stars opposite a very pretty Australian actress Cate Blanchett who plays Katherine Hepburn, one of the many women of the highest league that Howard dated. Cate Blanchett won an Oscar for her on-screen brilliance along with an Oscar nomination for DiCaprio for his role as the energetic Howard who slowly drifts away from the normal world. 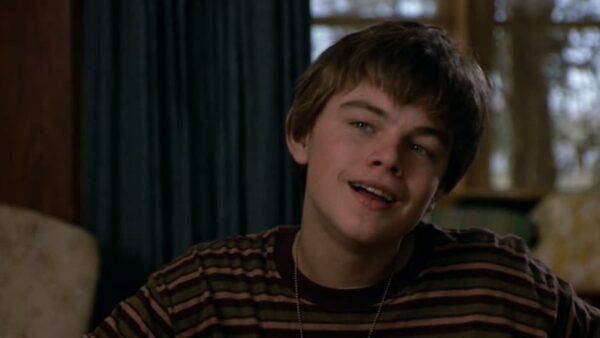 Based on a novel by Peter Hughes, who also wrote the screenplay, this romantic venture is directed by the Swedish Lasse Hallstrom. The versatile Johnny Depp, who can play the most eccentric roles to perfection, stars as the main character named Gilbert Grape, who is responsible for looking after his mother and mentally handicapped brother Arnie, played by Leonardo DiCaprio.

The movie narrates how the entry of a new girl named Betty into the small town of Endora changes Gilbert’s life as their romance blossoms. DiCaprio gives a befitting performance, getting nominated for an Oscar and a Golden Globe. The movie shows the dysfunctional family from a new perspective, sympathetic rather than making the viewer feel sorry. 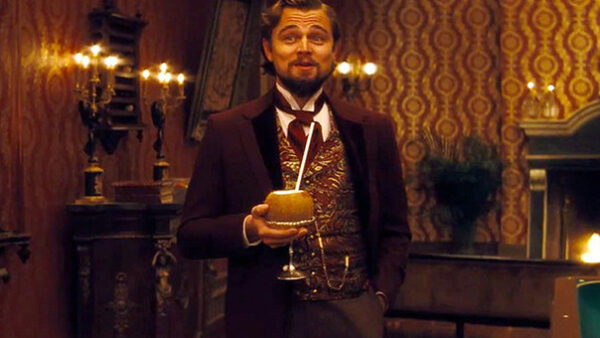 This movie is set in an era just two years before the civil war when slavery was legal and a well-established business. This western is about a slave named Django who helps a German bounty hunter named Dr. King and is set free. Together, they work to catch criminals and make their way to a plantation owned by Calvin Candie (Leonardo DiCaprio), where Django’s lost wife is still alive and a slave.

DiCaprio really fits into the role, with his insensitive, looking down upon slaves’ attitude. Director Quentin’s project has been a major success at the box office. It also won an Academy Award and a Golden Globe. 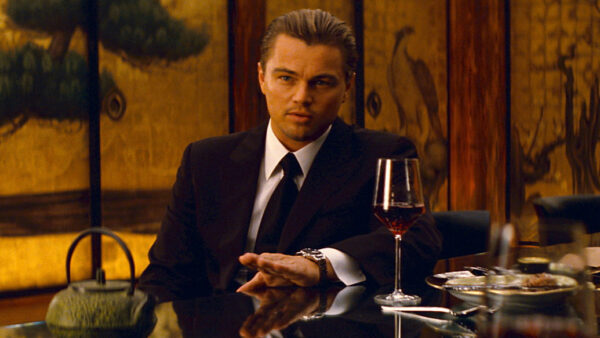 Directed by the much revered Christopher Nolan, Inception is one of the best movies ever made, with a unique concept that you understand better each time you watch the movie again. The talented Leonardo DiCaprio plays the main character, a thief who can steal ideas using the dream-sharing concept. He is given a new task to plant an idea using the same method.

The movie ending is a paradox leaving the viewer wondering whether Dom Cobb (DiCaprio) has made it to the real world, or is in limbo. Inception is one of the highest critically acclaimed movies, with 4 Academy Awards and a score of other awards to its name. 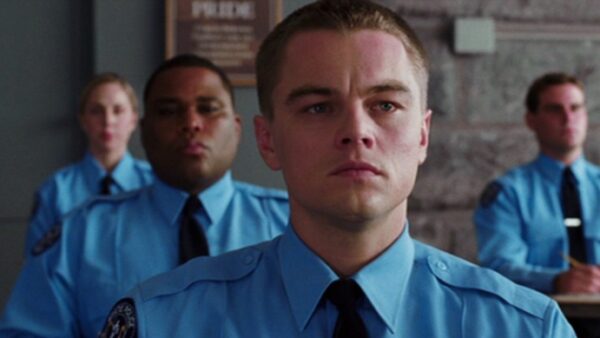 Martin Scorsese is back with another project – this time he has directed a crime thriller like no other. The cast includes his favorite star with most appearances in his movies, Leonardo DiCaprio along with Matt Damon and Mark Wahlberg.

The movie is about an undercover cop, Billy (Leonardo DiCaprio) who infiltrates a criminal gang. The mafia has a mole of its own in the police department. As both parties become aware of each other, it is a race against time to catch the other. With a star-studded cast, 4 Oscars, and countless other awards, The Departed remains one of the best crime movies to have hit the screens. 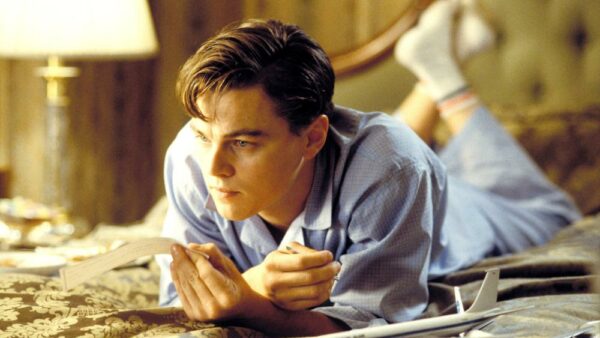 Based on the true story of and the book written by Frank Abagnale Jr. himself, this crime genre movie directed by Steven Spielberg is arguably Leonardo DiCaprio’s best work. The story is about a young boy, hit by his parent’s separation and financial losses, who takes on himself to make things right.

By the time he is arrested, Frank is nineteen years old and has made millions using fake checks by posing as a Pan Am pilot. This is a real-life cat and mouse story where Frank is actively pursued by an FBI agent Carl Hanratty (a role played by Tom Hanks) for years before finally getting caught in France. DiCaprio got a Golden Globe nomination for his skillful role-playing.

We can’t resist mentioning these epic performances by Leonardo DiCaprio as well:

Did we miss any of the best Leonardo DiCaprio movies of all time? Please let us know in the comments below!