15 Best Gangster Films of All Time 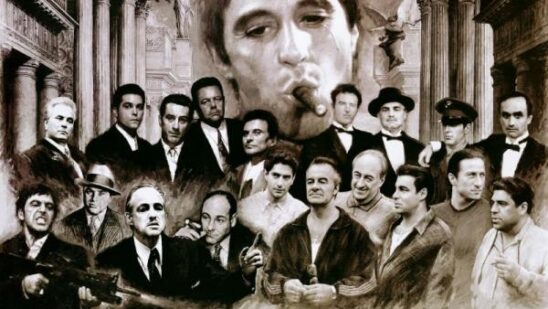 Controversial? Maybe. Enthralling? Definitely. With the emergence of the crime genre in the film industry, the gangster culture has become one of the most admired entities in the art of directing movies, fashion, and beyond. Whether it’s called organized crime, mob, or mafia, such a category of the film industry has very well established its reputation as one of the most cunning and well-regarded entities of entertainment. Here are 15 of the best gangster films of all time:

Robert De Niro is one of the best practitioners of the art known as method-acting. With the brains as well as looks of a drastic criminal, the actor starred in and directed the 1993 classic A Bronx Tale, a film revolving around a man who makes a commitment to the vast and corrupt world of crime in order to raise his family.

Set in the mid-19th century in Five Points, the film showcases Bill “The Butcher” Cutting as a crime boss and his struggle for power against rival gangs.

The film features some great performances by Daniel Day-Lewis, Leonardo DiCaprio, and Cameron Diaz. Directed by Martin Scorsese, the film capitalizes that America was born in the streets and accomplished what many gangster films fail to do so: winning an Academy Award for Best Picture.

Carlito’s Way is a collaborative effort of two of the most well-known gangster icons in the film industry: actor Al Pacino and director Brian Da Palma. After 5 years of a 30-year prison sentence, Carlito Brigante gets freed from jail thanks to his friend and lawyer, Dave Kleinfeld.

Despite turning over a new leaf and trying to purify himself from his early wrongdoings, the passion for crime proves to be too strong for the newly-free criminal.

A team of six criminals unknown to each other carefully plan their heist to be foolproof but when the police rush to the crime scene and kill one of them, the remaining five conclude that one of them must have been the informant for the police.

A crime film with immense suspense and detective skills, the five – using their skills relevant to the knack of criminology – begin to determine the snitch.

When a group of the country’s most dangerous criminals, rapist, and murderers are being set for a prison transfer on an airplane, hell breaks loose and so does the passengers.

Starring Nicolas Cage as the only man in the plane with dignity in his blood, the words ‘rumble’ and ‘ruckus’ do not even cover the mayhem caused by the outlaws in this epic gangster film.

No matter how amazing the film was, it chronicles the world of crime rather than the Dark Knight. Let’s face it, Batman is not a superhero. He is basically a vigilante and detective.

When the mass-murdering psychopath known simply as The Joker begins to terrorize Gotham City, the caped crusader realizes that the Clown Prince of Crime isn’t after anything materialistic or wealth, he just wants to introduce a better class of criminal to humanity.

Bryan Singer’s critically acclaimed The Usual Suspects revolves around a really mind-boggling plot in which a sole blast survivor tries to explain to the New York police the series of events that lead him and his four fellow criminals to the blast site. Things get really sketchy when the survivor starts mentioning the influence of an omnipotent criminal mastermind named ‘Keyser Soze’.

Christopher McQuarrie went on to win an Academy Award for the Best Original Screenplay for his epic mystery screenplay.

Unlike many other crime-drama films, The Untouchables relies heavily on narration and flashbacks to make it worth a while and successful from a filmmaking point of view.

Directed by Bryan Singer, the film convinces the audience that the greatest trick the devil ever pulled was making the entire world believe that he does not exist.

Directed by Quentin Tarantino, Pulp Fiction is an undisputed masterpiece when it comes to filmmaking on controversial topics such as criminality and disobedience towards the long arm of the law.

The film revolves around the unique tale of Los Angeles’ small-time gangsters and thieves trying to make it big in a land of law-abiding citizens.

The film goes beyond the average crime film as it is considered one of the greatest gangster movies ever. Highlighting the importance of loyalty and trust in the dark world of crime, actors Ray Liotta, Robert De Niro, and of course Academy Award winner for Best Supporting Actor Joe Pesci has brought out one of their best performances in the art of filmmaking and acting.

San Francisco Police Department’s pride, Inspector “Dirty” Harry Callahan got more than he was asking for when the unknown sadistic serial killer with the alias Scorpio runs amuck and begins to terrorize the entire city with murders, animosity, and violence.

With elements such as intense gunshot scenes and criminology exploration, the film is one of the most admired crime thriller films out there.

Starring Robert De Niro and James Woods, the film has a reputation for being one of the most well-known gangster films revolving around relationships, greed, wealth, and betrayal.

Initially hesitant, Italian director Francis Ford Coppola had no idea how big his masterpiece would be once released. Starring notorious Marlon Brando and rookie Al Pacino as father and son Vito and Michael Corleone respectively, the film highlights a family who chooses crime as a profession and catapults the idea of ‘acceptable’ criminality.

The Godfather enjoys the status of a cult classic and is often considered as one of the best films ever made.

Tony Montana was just in a Hawaiian shirt when he started to live the American Dream. Down on his luck and looking for odd jobs, the immigrant decides to take things into his own hands and selects massacre as the sole option for moving forward.

He quickly builts an empire and solidifies his position as the most ruthless gangster in the country.

The first Godfather was the first of its kind. There was never any film so beautifully captured such a controversial theme before its time. It certainly was not the last either. The Godfather Part II failed to do what numerous sequels have failed to do: be better than the predecessor.

Showcasing Michael Corleone’s rise in the mafia and even killing his brother to do so highlighted the horrific nature of the American crime family. Winning twice as many the Academy Awards as its predecessor, the film is arguably the greatest gangster film ever made.

Our list cannot be completed without mentioning these titles: