15 Best Cowboy Movies of All Time

Western movies have their own unique style and fervor. This cowboy genre has triggered the professional careers of many actors, helping them in becoming a symbol of manliness. It is always a bit tough to rank so many classic movies against each other but one thing’s for sure that the 60’s era will dominate the list. Let’s start the countdown for the best cowboy movies of all time:

Based on the Japanese adventure drama film ‘Seven Samurai’, this John Sturges’ movie is one of many fantastic Western movies of the ’60s.

The movie has many good things about it but the best of all is its iconic music for which it also received an Oscar nomination.

This George P.Cosmatos’ film, starring Val Kilmer and Kurt Russell in the lead roles, shows some thrilling battles between the lawman and a gang of cowboys, the mustache men.

It’s not the typical old age western film and suits the taste of modern viewers.

No cowboy films list can ever be completed without mentioning either the Dollar Trilogy or the legendary Western actor and renowned film director Clint Eastwood.

This particular movie is the first of the Dollars Trilogy and it got the ball rolling for the popularity of the spaghetti western film genre. 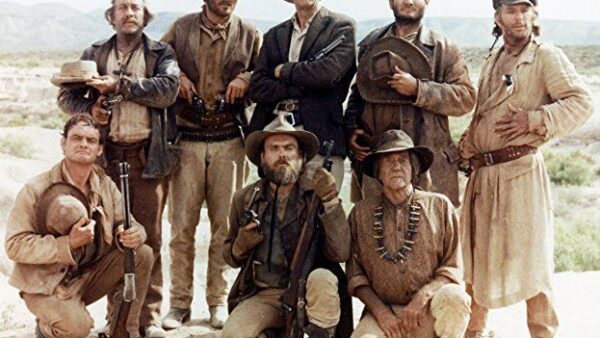 Sam Peckinpah’s epic Western film was a controversial figure in its era for showing the violence of crude men that portrayed a dreary picture of Western America.

However, it is also well known for the use of a revolutionary cinema technique in 1969. After its release, the production of western movies decreased considerably.

John Wayne, the iconic figure of the Western genre starred in many super-hit cowboy movies with one of them being John Ford’s film The Searchers.

In this movie, Wayne put on one of his best performances of his career embodying a distorted by his enemies but yet motivated by the will to take revenge.

It is the second part of Sergio Leone’s widely acclaimed Dollars Trilogy as Clint Eastwood again stars in this movie as a ‘Man With No Name’. This film is among the top 100 movies on the charts of IMDB top 250.

This film directed by John Ford contains a star-studded cast with John Wayne and James Stewart in the lead roles. It remains one of the few Western movies ever to be nominated for the Best Costume Design Award at the Oscars.

This dramatic adventure film of John Huston, based on the novel of the same name, is the top-ranked Western movie at Rotten Tomatoes with a certified fresh ranking of 100%.

The film has to be counted amongst one of the best-adapted screenplays, and it remains very true to its original source, the novel.

Finally a movie from a recent past, directed by Joel & Ethan, the Coen Brothers, who are among the top Hollywood directors currently.

It is the second adaptation of the novel of the same name. Starring the iconic Hollywood actors, Jeff Bridges and Matt Damon, alongside Hailee Steinfeld in the lead roles, the movie received 10 Oscar nominations.

When the decorated actors like Leonardo DiCaprio, Christoph Waltz, Jamie Fox, and Samuel L. Jackson star in the movie of an artistic Hollywood director Quentin Tarantino, then there’s hardly any chance at all for the movie to go wrong.

This action-packed movie hardly has any dull moment and is among one of the highly acclaimed western films of the recent past.

5. The Assassination of Jesse James by the Coward Robert Ford (2007)

This film is one of the most underrated and wrongly ignored movies of all time. Brad Pitt put on a tremendous shift in this movie and although he has been terrific throughout his career, this has certainly got to be amongst his best performances ever.

Casey Affleck supported equally well but due to some strange reason, the movie didn’t do that well at the box office despite positive critical reviews.

Starring Gary Cooper in the lead role, who won the Academy and Golden Globe Award for his outstanding performance, this well-directed film contains a strong plot, compelling music, but mainly it teaches and encourages its viewers to make a bold decision in times of crisis.

Age factor didn’t put an end to Clint Eastwood’s cowboy enthusiasm as he appeared again in one of the best western movies of all time that also won the Academy Award for Best Picture.

In this film, Eastwood plays a cowboy being notorious for being a violent killer in the past but one who had gone quiet with the age. But later, he proves that ‘Once a Cowboy, Always a Cowboy’.

This is the third and last part of the infamous Dollar Trilogy and is the highest-ranked Western movie on the IMDB list of Top 250, currently placed at #6 with a rating of 9/10.

It’d be unfair not to mention the name of Lee Van Cleef’s who also starred in many classic western movies with this being one of them.

Yet another movie from the ’60s and this one being the masterpiece of George Roy Hill starring Paul Newman and Robert Redford in the lead roles.

It shows brilliant chemistry, friendship, and trust between two people with different kinds of gifts, with one being sound mentally and others having impeccable shooting skills. The ending of the film is also too thrilling.

We can’t resist mentioning these classic cowboy films as well:

Did we miss any western classic that should have been a part of this list of the best cowboy movies of all time? Let us know in the comments below!