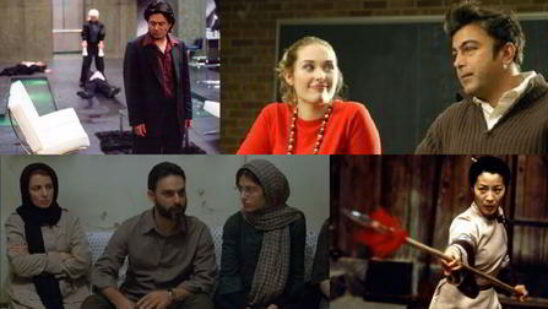 Asia is the world’s largest continent both by population and by land area containing about 50 countries. So to pick just 10 of the best Asian movies of the last 13 years is a hell of a task and it’s highly likely that most of you will have different opinions on this list that we have compiled today. Before proceeding any further, let us share some things that we took into account while compiling data for this list; We aren’t taking into account any animated feature movies otherwise a couple or even more would have easily been included. Moreover, we’ve tried to take movies from as many different countries as possible (the Middle East included) so that one particular cinema doesn’t dominate (we, however, do have multiple mentions in the honorable section country-wise). So, without any further delays, here are the 10 best Asian movies of 2000-2013:

Although the title of the movie and the country might be knocking you in the head to tell you that it has some link with Osama Bin Laden but that’s not the case. This Siddiq Barmak film depicts the extremist Taliban regime and its strict rules, especially against women.

The movie is about a pre-teen girl who disguises herself to support her family because her family’s men had been killed in the war by the Soviets and the Taliban won’t allow any females to work. The movie beautifully shows the real culture of the country under the Taliban reign backed by some very commendable acting.

The film was very well received in the Western world and the fact that it was the first film to be shot entirely in Afghanistan since 1996 is a big honor in itself. In addition, the film won the Golden Globe award for Best Foreign Language film. To achieve that all with a budget of only $46,000 is really outstanding.

The Israeli-Palestinian conflict which began back in the middle of the 20th century has taken many lives and ruined many homes. The Palestinians have mostly been on the wrong end of the Israeli suppression which leads them to react in very menacing ways to hurt Israelis, like suicide bomb attacks.

This movie directed by ‘Hany-Abu-Assad’ is based on the same theme and tells a story about two boys who are picked for suicide attacks. The film shows how a person is motivated or persuaded to perform such kind of an act so daringly and willingly, and also that at times, alternate options must also be sought in order to fight against injustice.

The movie was well-received overall but a plot such as this was always going to create some controversies as the Israeli victims of the suicide bombing didn’t like it and said that showing the film was immoral. But, the film did very well in two of the major worldwide awards winning the Golden Globe award for Best Foreign Language Film and receiving the nomination for Oscars in the same category.

It’s good to have Zhang Yimou’s martial hero film made on ancient fictional stories to make the list a bit more versatile and colorful.  The film is about a guy Nameless, played by one of the leading Chinese actors Jet Li, who seeks to assassinate the King. The film comprises some very interesting storytelling, fighting, and decision-making scenes and there is hardly any boring moment in the whole movie Jet Li is brilliant as ever.

A lot of money was spent on the making of the film but it did pay off as it became the highest-grossing motion picture in Chinese film history at that time. It also received both the Oscar and Golden Globe nomination for Best Foreign Language film.

We aren’t including an Indonesian film in the list just for the sake of involving the Southeast Asian zone in the mix, instead, it is one of the best action movies of recent years and we really wanted to place it higher on our list. Gareth Evans’ martial arts film is an adorable portrayal of a Mickey Mouse sort of game between the cops and the criminals. Its sequel ‘Berandal’ is due to be released at the end of March and we just can’t wait to see that.

As for the first part, it was a box office success receiving highly positive reviews from the critics who lauded the film while some others called it ‘no frills and all thrills’.

One of the most brilliantly directed movies with a strong plot and so many twists and turns that made this movie a worldwide hit grossing $213.5 million against its meager $17 million budget. The movie covers so many themes like a teacher-student relationship, love, betrayal, sacrifice, etc and the title describes a place full of talented and extraordinary people who remain undercover.

Ang Lee’s movie received an astounding 10 Oscar nominations winning four of them including Best Foreign Language Film. The film was even nominated for the Best Picture award, a feat achieved by only a handful of foreign-language films in history. In addition, the film won four BAFTA awards and also two Golden Globes including the Best Director award to Ang Lee in the Golden Globes.

Over 1000 movies each year are made in the Indian film industry (commonly referred to as Bollywood), so it was really a tough call to pick only one out of hundreds of movies. However, there were only 5-6 films that we considered worthy of making it to the list but we picked the bold and controversial comical satire of Umesh Shukla, Oh My God starring Paresh Rawal in the leading role with ‘Akshay Kumar’ in the supporting role, which is an unofficial remake of Mark Joffe’s Australian comedy movie ‘The Man Who Sued God’.

It’s rare to see remake versions being better than the original ones but in this case, we rate the Indian version much higher because it’s not an exact copy, rather it portrays some factual religious issues, especially amongst Hindus of India and also amongst other religions exercised in India.

It explains how religion in most regions of the world has become a mere business and many religious leaders act as traders to use it as a commodity and try to gain profit, sometimes even by fooling the general public. The film is not based on an atheistic belief about God’s non-existence, rather it supports God’s existence but explains that God doesn’t live in some cubicles or spheres but rather a man’s own soul is the temple of God.

The extremist Hindus didn’t like the movie and complained that some of its dialogues and scenes hurt the sentiments of Hindus. The film was banned in UAE. However, the movie was a super hit at the box office and received critical acclaim from the more liberal and broad-minded audiences.

The film won the award for Best Adapted Screenplay at the National Film Awards.

Talking about remakes, not many people know that Martin Scorsese’s crime thriller Hollywood blockbuster ‘The Departed’ is an official remake of a Hong Kong film ‘Internal Affairs’. We also could barely believe it when we became aware of the fact that an Asian movie’s plot led to the film that ended up winning 4 Academy Awards including Best Picture and Best Director in 2006.

The Asian version, which is also equally impressive, is actually a trilogy and we suggest that those who haven’t watched it yet should watch all three parts. The duo of Andrew Lau and Alan Mak directed this Hong Kong extravaganza that surely entertained the audiences through its action-packed thrilling plot backed up by tremendous acting from all the actors.

The film won 7 awards out of 16 it was nominated at the Hong Kong Film Awards including Best Picture, Director, and Actor. It also won several other awards and nominations at other award shows. It is Hong Kong’s highest-rated movie on IMDB and in fact, is part of the IMDB top 250 movies of all time.

Shoaib Mansoor’s masterpiece, literally translated as ‘For God’s Sake’, is another well-directed movie that covers some very controversial topics relating to religion in an astonishingly brilliant way. The film tells the story of three different people in three different countries having some issues regarding the Islamic religion and Asian culture.

In Pakistan, a singer named Sarmad gets brainwashed by some religious activists and becomes an extremist. In the USA, his elder brother Mansoor, played by renowned Pakistani actor ‘Shaan’, has to suffer brutal torture by the American police for something he knows nothing of, that is the 9/11 incident, just because he’s Muslim. He also falls in love with a Christian girl and gets into confusion about whether a marriage between a Christian and a Muslim can work out or not.

Meanwhile, in England, a Muslim girl who had fallen in love with a British boy Dave is trapped by his father who convinces her to visit Pakistan by promising that they’ll return after a few days but instead gets her married forcefully and against her will to Sarmad, who is again talked into by the religious leaders that this will be a favorable act in the sight of God and it only promotes Islam by stopping a Muslim girl to marry a non-Muslim guy. Quite a strong plot, isn’t it?

Any film covering a topic against religious extremism is always prone to controversy and criticism from conservative religious persons and so was the case with this movie. Some people wanted the movie to be banned in Pakistan but as it turned out, it was the highest-grossing film in Pakistan in 2007.

Moreover, as it was a joint venture of Pakistan, India, and the USA, it received a positive critical and commercial response from a worldwide audience and was a major hit. The movie was considered to be a revolution in Pakistani Cinema by many people. The film won four Lux Style Awards including the Best Picture award for that year.

‘Laugh and the world laughs with you. Weep, and you weep alone. This is not the only touching quote from Park Chan-wook’s mystery thriller film as it contains a couple of other very remarkable ones as well. Actually, the film is the second, and also the best, part of The Vengeance trilogy.

Choi Min-Sik who played the leading role in this film was as brilliant as one can expect and his actions in the scene in which he begs for the truth not to be told to her daughter and cuts her tongue is one of the best acts ever.

This box office hit received universal critical acclaim. In 2008, voters on CNN named it one of the ten best Asian films ever made.

None of the other four films in our top 5 even got nominated for Oscars so we are putting an Academy Award winner Best Foreign Language film at the top of the list. To be honest, the acting in this film is so unbelievably realistic that while watching this drama film of Asghar Farhadi, at times you feel that you are watching a documentary and not an act upon the plot. The most lovable character in the movie was Hojjat played by Shahab Hosseini.

The main theme covered by this movie is the consequences of a husband/wife separation and the adverse effects it can have not only in the lives of those two but also on the others involved including the kids if, parents, and even maids, neighbors, tutors, etc.

The movie rocked at the box office and won the award for Best Foreign Film at both the Academy and Golden Globe Awards, becoming the first Iranian film ever to achieve that feat.

Due to a plethora of really great films coming out of Asia, this list can’t be completed without mentioning these titles:

Did we miss any great titles on our list of the best Asian movies of 2000-2013? Let us know in the comments section below!