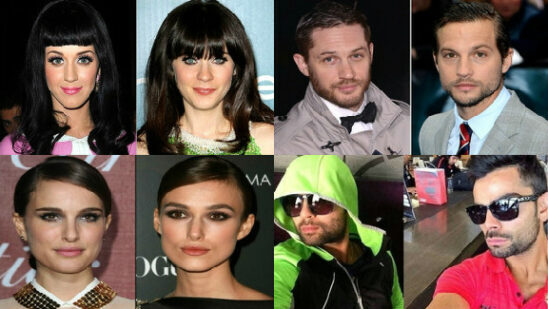 When it comes to looks, it is surprising to see how many couples celebrities can make people believe that they are twins. While one-half of the pair may have achieved more fame and success than the other half in such cases, it is definitely interesting to see how facially similar so many celebrities around the world with different backgrounds and ethnicity can be. Get ready to be astounded by taking a look at twenty different pairs of celebrities who, despite having no biological relationship of any kind, look exactly like each other. So without any further delay here are the top 20 pairs of celebrities who look exactly alike: 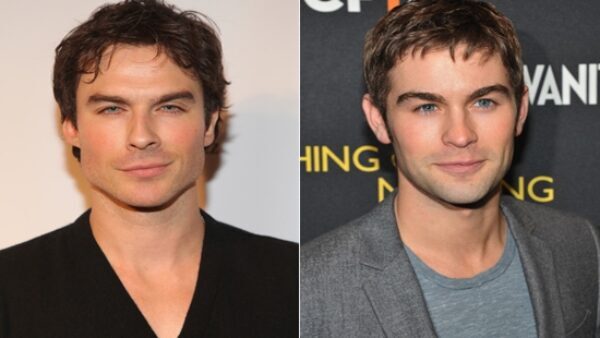 Both share a history of starring in popular teen drama serials, the blood-sucking vampire Damon Salvatore from The Vampire Diaries and the lacrosse player Nate Archibald from Gossip Girl look amazingly quite like each other.

To the point of blue eyes, the same hairstyle, and employed by The CW channel, the resemblance between Ian Somerhalder and Chace Crawford may give their respective show’s writers the to pull off a crossover featuring the two as long-lost brothers but that seems unlikely. 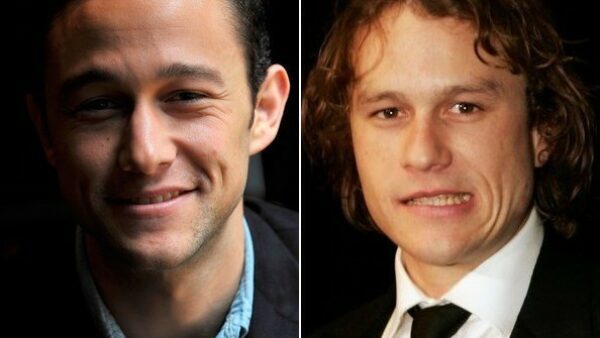 Good friends and occasional co-workers, it was their dream to make it big in the Hollywood business that was responsible for bringing them together under one roof. The two starred together in the 1999 romantic comedy 10 Things I Hate About You.

With Joseph Gordon-Levitt being much younger than Heath Ledger, the former looks like the latter’s younger brother. In fact, when Gordon-Levitt was announced as a cast member of The Dark Knight Rises, it was speculated that the actor might be replacing Ledger for the role of the Joker. 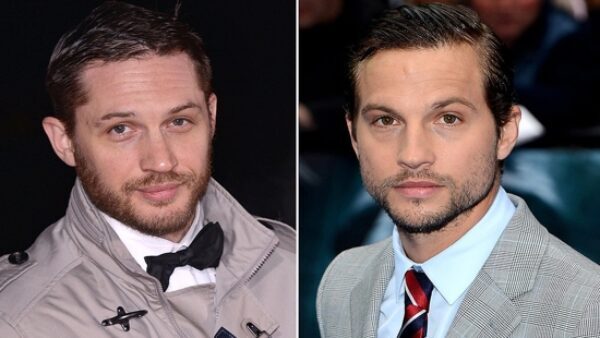 Despite having different nationalities, Tom Hardy and Logan Marshall-Green look very well the same. While Hardy has enjoyed tremendous success and starred in blockbuster hits such as Inception and Black Hawk Down, the same cannot be said about Marshall-Green whose career has been limited to television roles. 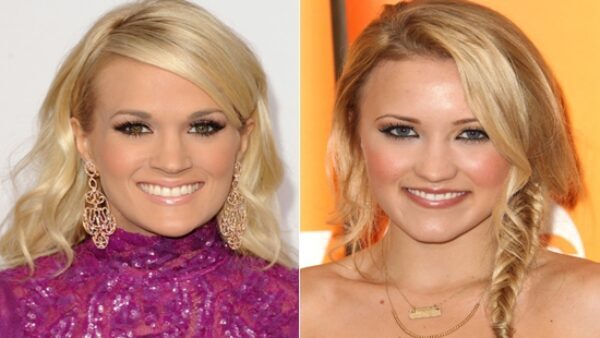 From careers to birthdays, Carrie Underwood and Emily Osment are no strangers to the fact that they are each other’s doppelgangers. Both were tremendously successful in their own rights, it is safe to say that Underwood had a bigger success than Osment.

Tired of being mistaken for Underwood, Osment once jokingly addressed their striking similarities on Twitter as she tweeted:

“Stop it! Carrie Underwood looks like MEEE. Also. Hi Carrie! We have the same birthday!” 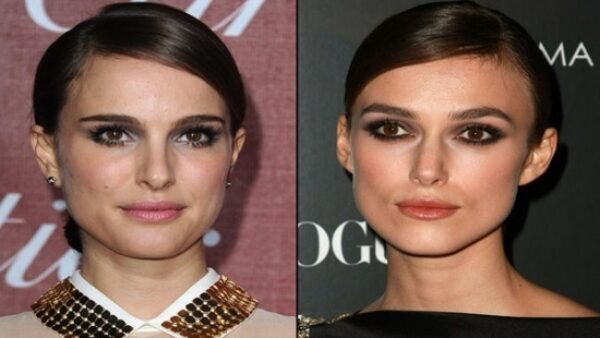 Due to their uncanny resemblance, people have actually asked on Yahoo! Answers whether or not Natalie Portman and Keira Knightley are the same people.

Do not get your hopes up because the two talented actresses are indeed separate individuals. Oddly enough, both of them have revealed that they have been mistaken for each other on many occasions. 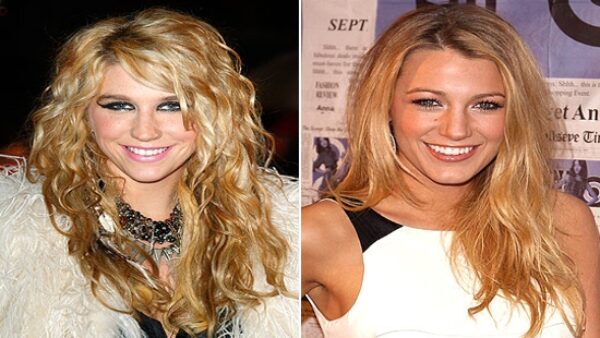 Who could forget when Kesha released her single “TikTok” and gave the music genre of synthpop the push it needed? As fate would have it, the singer is also one of the celebrities who have a look-alike as the actress Blake Lively is quite similar in her appearance. 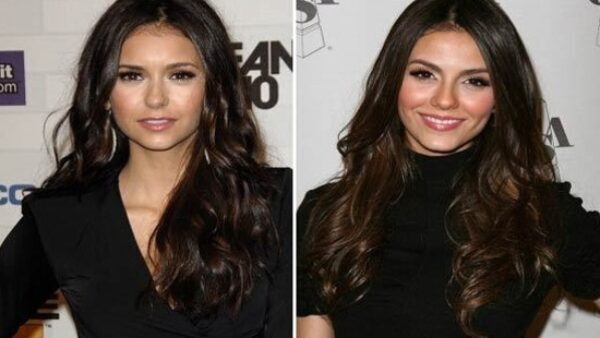 Despite the fact that Nina Dobrev is of Bulgarian and Canadian descent and Victoria Justice is of American descent, the likeness between the two is heavily noticeable.

While Dobrev has made a name for herself by starring in The Vampire Diaries, Justice had an adequate amount of success not only as an actress but also as a singer. 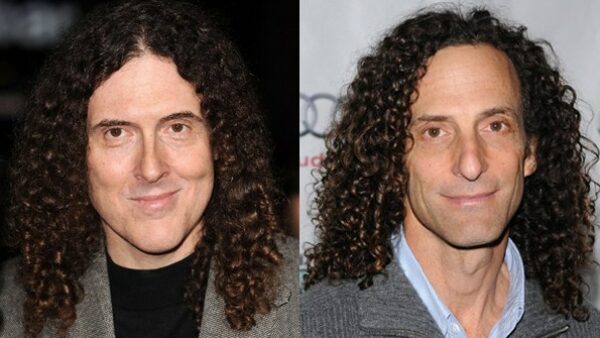 Fate may have granted “Weird Al” Yankovic and Kenny G similar faces, career paths, and even hairstyles but the same cannot be said about their success.

While Kenny G stands out as the most successful instrumental musician of this generation to the point of selling more than 75 million records, Yankovic is nowhere near him but has managed to bag four Grammy Awards. 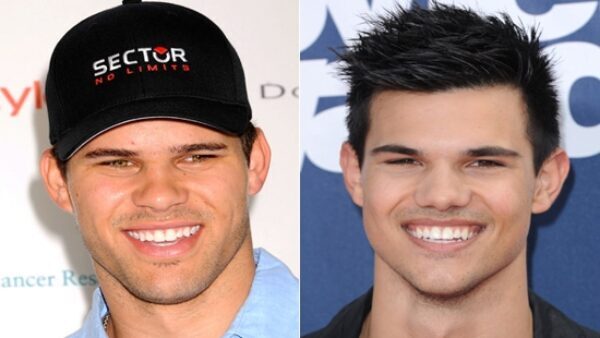 From haircuts to smiles, actor Tayler Lautner and NBA player Krish Humphries are remarkably similar. Host Shaun Robinson teased their similarities when Lautner was her guest in Access Hollywood; prompting him to say:

“I can see it a little bit… is that a good thing?”

When Shaun revealed that she found NBA star Humphries “very handsome,” Taylor felt relieved. “He is,” Taylor agreed on their resemblance:

“I will take the compliment. Thank you very much.” 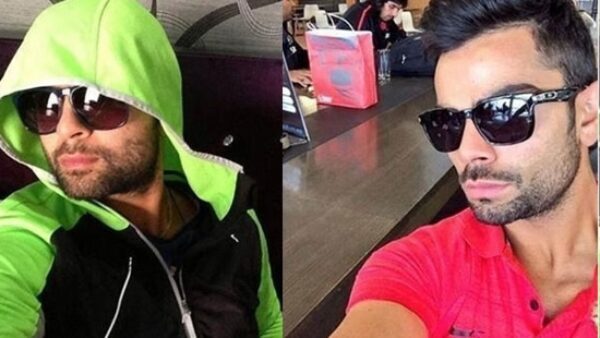 The stakes are always high when India and Pakistan are playing against each other on the Cricket field. With a controversial history shared between the two countries, the fans of the respective teams never agree on anything apart from the fact that India’s Virat Kohli and Pakistan’s Ahmed Shehzad look exactly the same.

As far as their statuses are concerned, Kohli proved to be one of the most promising batsmen on the Indian Cricket Team and currently dating the beautiful Bollywood starlet Anushka Sharma while Shehzad has not done anything impressive and has been reduced to “the guy who looks like Virat Kohli”. 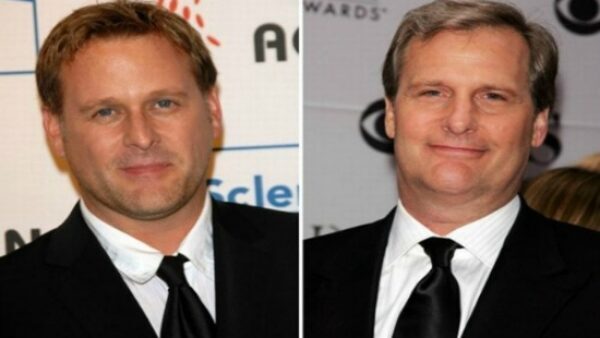 Apart from a similar acting career that has targeted comedy, one can very well assume that Jeff Daniels and Dave Coulier are brothers.

Daniels recently teased their similarity in the movie Dumb and Dumber To by mentioning seeing all the episodes of Full House – the comedy show in which Coulier starred. 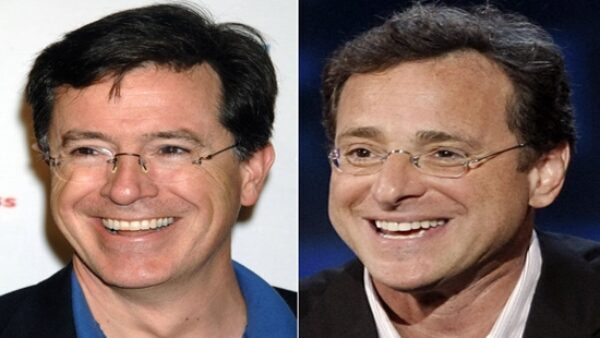 Speaking of Full House, Dave Coulier is not the only one from the cast having a doppelganger as the man behind the caring father Danny Tanner, Bob Saget also has one.

Apart from a similar look, Saget and Stephen Colbert are both stand-up comedians and served as television hosts as well. 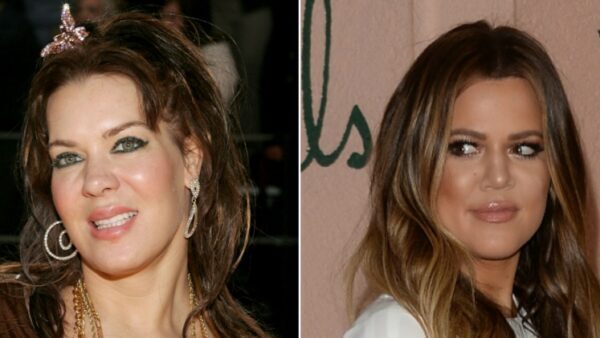 Two entirely different entities when it comes to careers yet a striking resemblance when it comes to looks. Along with her sisters, Khloé Kardashian is best known for her contribution to the fashion industry and her television appearances in the reality series Keeping Up with the Kardashians.

In strong contrast, Chyna had a completely parallel life and career as she was the most dominant diva in WWF, having won the Women’s Championship one time and even winning the Intercontinental Championship on two occasions. 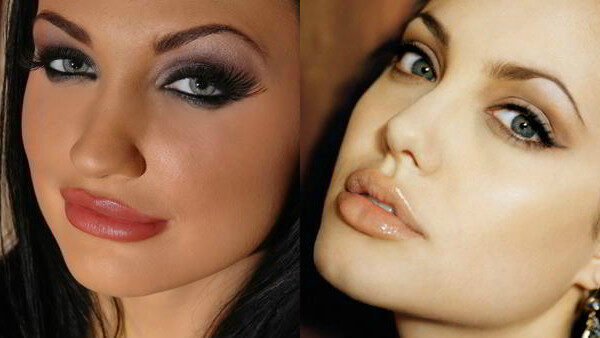 With Vogue, People, and Vanity Fair acknowledging her as the world’s most beautiful woman and Esquire, FHM, and Empire naming her the sexiest woman alive, without a shadow of a doubt Angelina Jolie has a mesmerizing sex appeal.

As far as similarities are concerned, the Hungarian pornographic actress Aletta Ocean has been renowned for having a vague resemblance to Jolie and both have made quite a name for themselves in their respective film industries. 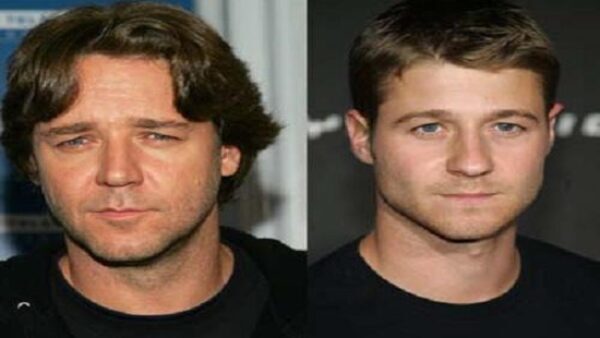 Undoubtedly one of the greatest actors of his time, Russell Crowe pushed himself to the limits in order to stand out as the best. With a passion to entertain, the performer cemented his legacy by starring in Ridley Scott’s Gladiator.

While Crowe has established his reputation as a strong one, McKenzie is still far from success but considering the fact that he bagged the lead role of Detective James Gordon in the new Fox show Gotham, it may very well turn out to be his big break. 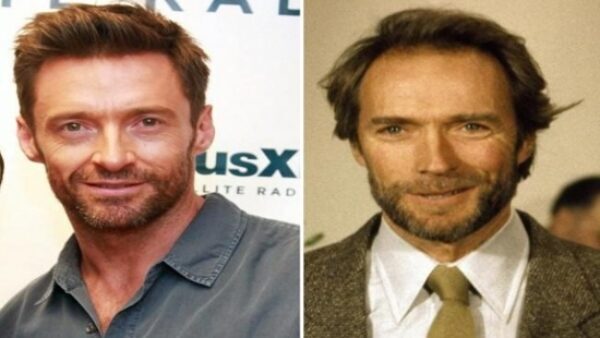 Separated by more than four decades, Hugh Jackman resembles Clint Eastwood in his prime. With masculinity and beards being both the actors’ trademarks, it is fair to say that there can only be one Man with No Name and only one Wolverine. 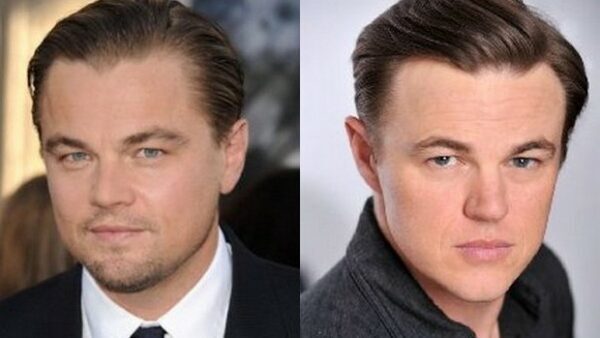 Receiving critical acclaim since day one, Leonardo DiCaprio is one of the greatest Hollywood actors of all time. The actor needs no introduction but the same cannot be said about Ben Cornish – a professional Leonardo DiCaprio impersonator.

In fact, Cornish gets mistaken for DiCaprio a dozen times every day so he made a living out of it. After serving as extras in a few films, Cornish played the role of Dom Kolb – a spoof of DiCaprio’s role of Dom Cobb from Inception– in the 2013 comedy film Scary Movie 5. 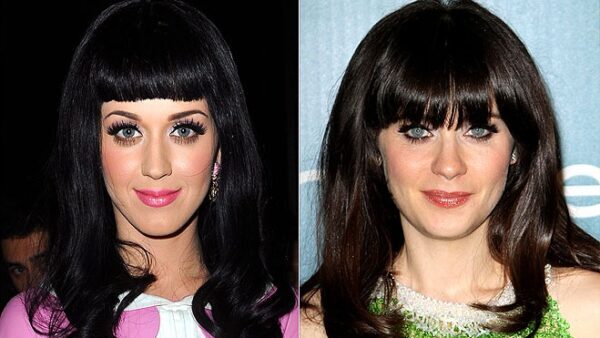 When Katy Perry made an impact in the music industry by releasing the single “I Kissed a Girl”, everybody had to take notice as it was widely speculated that the American actress and musician Zooey Deschanel had changed her stage name.

Possibly the most widespread pop-culture myth today, Perry and Deschanel are not twins and not even related. The misconception may have been put to rest but that has not stopped the two celebrities from getting mistaken for one another from time to time. 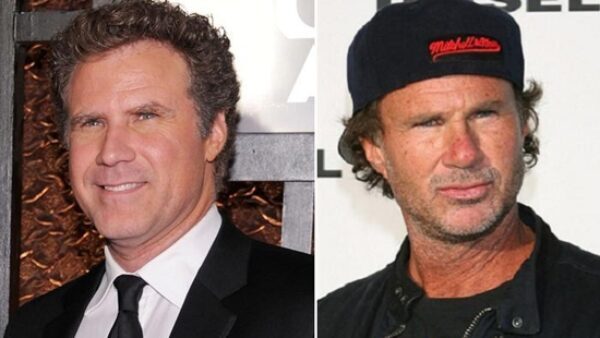 It is no secret that Will Ferrell and Chad Smith have been engaged in a fun feud for many years to find out who is better-looking. Both share an uncanny resemblance and both are exceptionally gifted at what they do; Ferrell is a natural comedy actor and Smith is an amazing drummer. Smith has often jokingly acknowledged their resemblance by wearing shirts that read:

“I Am Not Will Ferrell.”

in live performances. When Ferrell met the drummer of Red Hot Chili Peppers for the very first time, he gazed at him and stated: 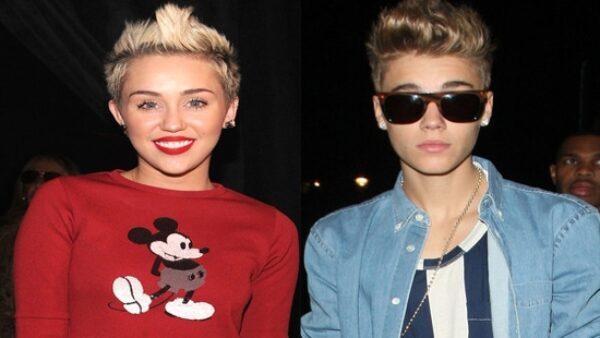 If the jokes about Justin Bieber being a girl were not enough, the final entry of this article just might take the cake. As creepy as it may be to realize, the Canadian sensation is the spitting image of Miley Cyrus.

The two pop singers are friends and Cyrus has often joked that Bieber stole her look as she stated in an interview with Entertainment Tonight:

“I did see Justin the other day and I thought I was looking at a mirror and then I realized that it was Justin Bieber!”

Have you come across any similar pairs of celebrities who look exactly alike? Let us know in the comments below!