15 Best Dragon Movies Of All Time

Ever since we were kids, our grandmother would tell us stories about a dragon terrorizing a land and a hero eventually rising to challenge it. Those stories entertained us back then and not much has changed now, for dragon stories are still a popular theme in Hollywood. Most movies depict dragons as a danger to human society, but recently some films have also shown them as man’s best friend. Here is a list of the 15 best dragon movies of all time, that surely deserve a watch if you are in the mood to enjoy some fire-breathing creatures. 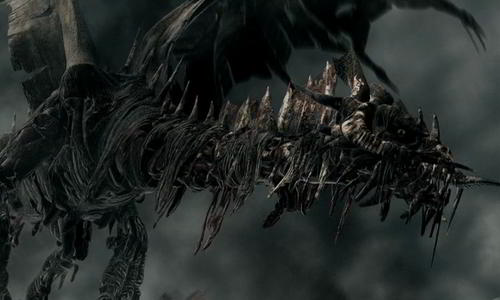 Based on the D&D games, the movie was a sequel to the original Dragons and Dungeons. Although an extremely low-budget production, the movie still managed to do everything its predecessor failed to do: build a dramatic environment, extract a worthy performance from a handful of unknowns, and have suitable dialogues at all times.

The film is set 100 years after the events of the original film. Damodar survived the attack of Freeborn and now remains on the Earth as an undead. Left with nothing but the pain of his pitiful existence, he seeks revenge on the descendants of the kingdom of Izmir by waking up the mighty dragon named, Faluzure. Now Lord Berek and Melora must stop Damodar from accomplishing his sinister objective before it’s too late. 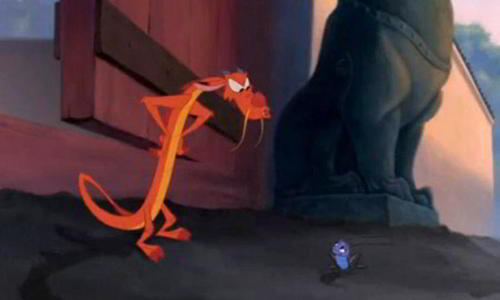 It was always doubted if animated films could deliver a story targeted at a more mature audience, and the animation studios have proved themselves time and again. Mulan is one example. The movie was a perfect mix of a darker war theme and surreal humor.

As the Huns prepare to attack China, one man from each family is called to fight in the imperial army. The Fa Family doesn’t have a son and the father decides to go himself. Mulan, his daughter, steals his armor and joins the army dressed as a man. The ancestors send a dragon to protect the fate of the Fa family and bring Mulan home safely. What follows is an epic journey of bravery, trust, and love. 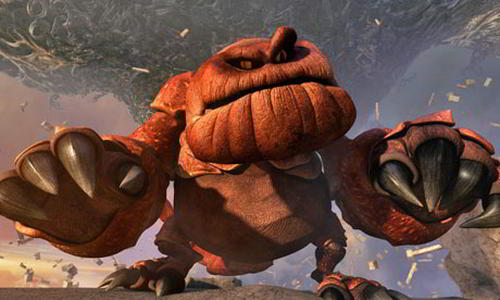 Every 30 seasons, a dragon known as “the world gobbler” rises to wreak havoc on Earth. It is about time for the dragon to rise again and pair of con men, who are pretending to be dragon hunters, appear. The princess of the valley asks them to go on this “end of the world” journey and save humanity from the deadly beast.

Even though the movie never really sets its bar as high as How to Train Your Dragon does, it still has plenty of creative visual imagery and an interesting plot to keep you engaged, at least, for once. 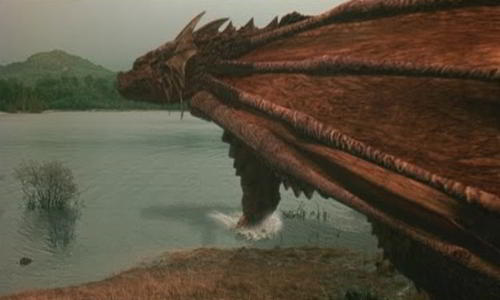 After the end of the First Crusade, George, along with his fellow crusaders, is returning home to a less violent life. Back home, the king’s daughter has been missing by what appears to be the last dragon left on Earth. Now George must find the princess in return for a piece of land on which he would continue his life.

This dragon movie is kept particularly light with character depth and suits best to a younger audience. However, it won’t be a disappointing watch for anybody with not-so-high expectations. 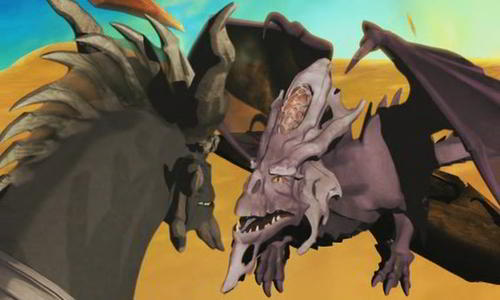 One of the rarest events in Hollywood is a sequel being better than the original. Dragons II managed to accomplish this feat quite easily. The storyline is much more creative, the characters have more depth, and the action sequences are well edited and put together.

After the events of the first film, Prince Dev and Princess Kyra face another major problem: Queen Cila has made a deal with the Shadow Dragon to help her win the war and rule the Earth; in return, she would open the portal to Dragon World. Now both the prince and the princess must work with one of Queen Cila’s outlaws to defeat her evil plans. 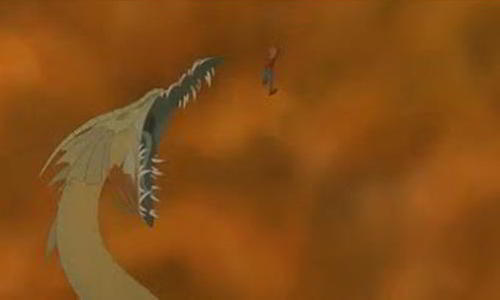 A young Richard Tyler gets caught up in a storm while going on a bike ride and takes refuge in a library with a strange librarian. While he is still there, Richard takes a fall and gets a bump on his head which transfers him to a fantasy world with three books to keep him company: Adventure, Fantasy, and Horror. Now Richard must find his way back to the library.

Although this dragon movie had an interesting plot, the animation quality was a little disappointing even for 1994 standards. 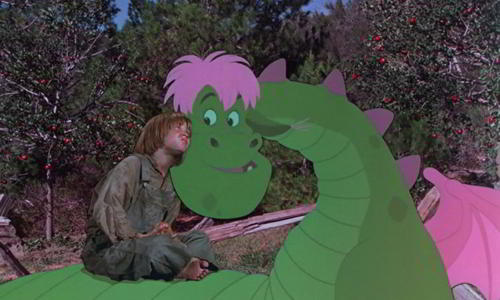 One of the lesser-known Disney productions, Pete’s Dragon is a story of a young boy named Pete who runs away to avoid labor activities with his new friend Elliot (a fire-breathing Dragon). They befriend Nora and her father who work at a lighthouse at the edge of Passamaquoddy.

Problems begin when the people of the town realize that Elliot is not merely a figment of Pete’s imagination, while Pete and Elliot buckle up to save the town from a calamity that lies ahead. 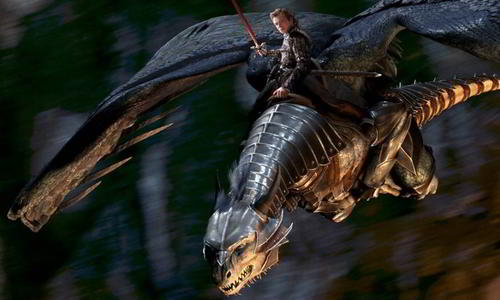 A poor adaptation of the famous novel Eragon. The movie doesn’t have much to boast about other than some really impressive dragon visuals, but it was a success nevertheless (thanks to its highly successful novel).

The story revolves around a 17-year-old Eragon living on the farms with his uncle Garrow. Eragon finds a blue egg in the forest and keeps it. A dragon is born out of the egg, which he names Saphira. But when the king of the land learns about the egg, he decides to claim it for himself. Things go bad for Eragon as he tries to protect the dragon and his uncle. 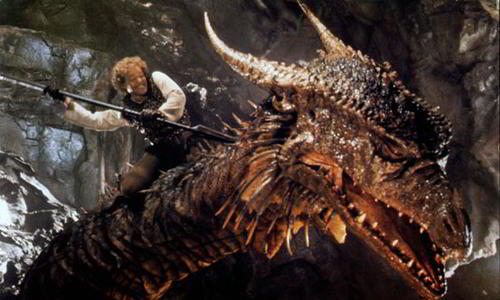 An aging sorcerer and his apprentice Galen are called by the citizens of the valley to help kill a fire-breathing dragon that is terrorizing the town. So they arrive at the place to tackle the situation, but things take a turn for the worse when the sorcerer is killed and Galen is left alone to deal with the problems.

The film portrays one of the scariest dragons that has ever been created in cinema history – in fact, 25% of the entire budget of the film was dedicated to the dragon alone. The dragon depicted in the film is often called the best movie dragon ever. 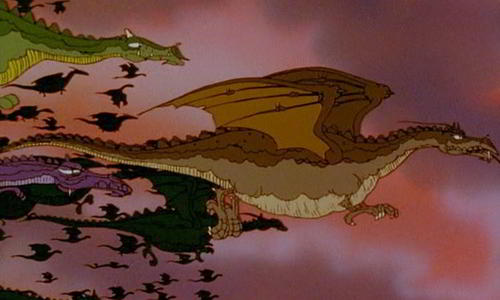 Loosely based on two books, The Flight of Dragons never saw a full theatrical release. The movie was decently animated and featured an engaging storyline.

In some mysterious magical land, a wizard Carolinus fears that people will stop believing in magic with their increased belief in science. So, he calls upon his fellow wizards to discuss a plan, all of whom arrive on their dragons. Carolinus intends to create a separate place where they can live in secret, but one of them disagrees and sets out to rule the world. 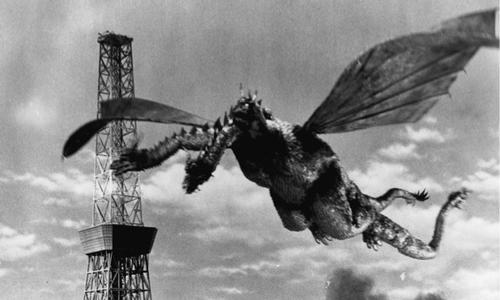 Any Godzilla fans here? This is one of the many films in the Godzilla lineup, but the first time that Godzilla was shown as a protagonist. Princess Selina is on the route in her plane when it gets hit by a meteor shower. When she returns she tells the people about forthcoming disasters, Godzilla returning from the sea and Rodan emerging from Aso’s crater.

All of these events happen really quickly. Later she reveals her final prophecy that life on mars was destroyed by a three-headed dragon, King Ghidorah, who now has its eyes set on Earth. 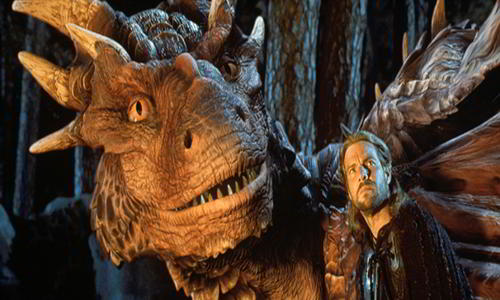 A prince is being trained by his teacher to fight like a knight so he can be a worthy successor to his father. When the king dies in a battle, the prince gets injured while taking the crown off of his father’s head.

A dragon’s heart is needed to save him. But the new king becomes corrupt, and now his knight teacher must team up with a dragon to stop him. 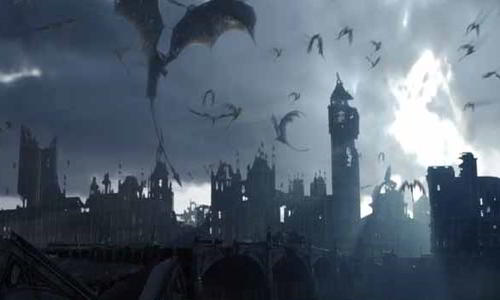 Two decades ago, a crew working in an underground tunnel awakened a sleeping dragon. Now in the year 2020, the dragons have driven the human race into hiding, and the boy responsible for waking up the dragon (Christian Bale) now leads a group of survivors. One day American militiamen turn up boasting that they can slay all the dragons to end humanity’s suffering once and for all.

What follows is a classy struggle for power which soon ends when both the parties learn that their real enemies are the dragons and they both should combine their forces to get rid of them. 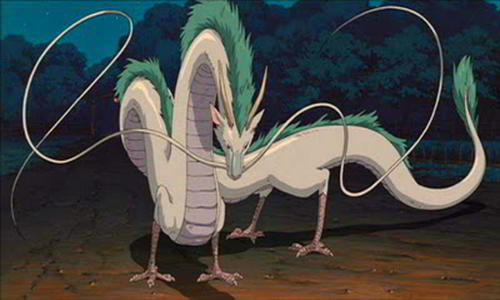 The most profitable Japanese film ever Spirited Away, is the story of a sullen 10-year-old girl who is moving to a new house with her parents when they accidentally stumble into the world of Japanese gods. Chihiro Ogino befriends a boy and starts learning the rules of the world and at the end of the film becomes a much more mature child due to her experiences.

Haku, the dragon shown in the film, is really unique in its physical characteristics and enjoys a large fan following to this day! 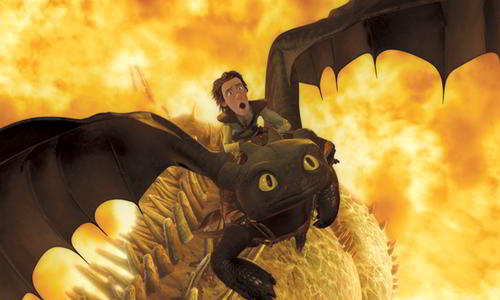 This movie isn’t on top of our list for no reason. After a really long time, Dreamworks studios managed to produce an animated film that had an engaging storyline, and constant humor in parallel with the serious tone of the film, something Pixar is known for!

In a kingdom far away, the Vikings are in a constant battle with the dragons. Hiccup is a coming-of-age Viking who is being trained to kill dragons. After a raid by dragons on their land, Hiccup manages to shoot down one of the most feared species of dragons ever: The Nightfury.

After spending some time with the dragon, Hiccup learns that they are only trying to defend themselves. Now he must stop his father and the tribe before they make a final raid against dragons in which only one side will remain.

This list of the best dragon films of all time cannot serve its purpose without mentioning these titles also:

What names come into your mind when you think about the best dragon movies of all time? Let us know in the comments section below!