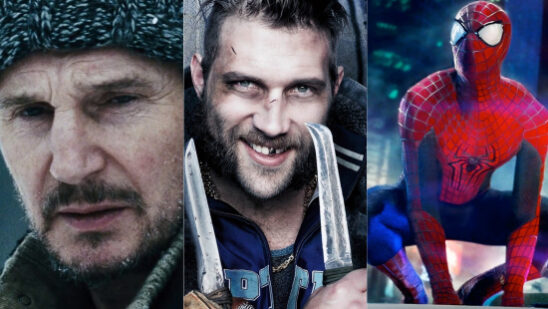 Advertisements have often been criticized for misguiding customers and movie trailers are no exception. As a pre-requisite of a movie, the trailers offer a glimpse to the audience about the contents but occasionally tend to purposely misinform. Here are the 15 most misleading movie trailers:

Ever since he starred in Taken, Liam Neeson revitalized his career by being one of the most sought-after actors in action movies. The fans were truly in for a pleasant surprise when the trailers of his survival movie The Grey hinted that the movie would conclude with Neeson battling a wolf while being stranded in Alaska.

However, the fans were outraged since the movie abruptly fades to black just as Neeson is about to fight the wolf. Despite director Joe Carnahan revealing that he had shot footage of Neeson fighting a wolf, he chose not to include it in the film even though some of its scenes were featured in the trailer.

From the horrific destruction to encroaching suspense, the trailers of Godzilla magnificently captured every chilling detail about the monster movie. Due to the trailers heavily relying on Bryan Cranston’s presence, the audience was convinced that he was the main character of the movie.

As it so happened, the trailer had cleverly cashed in on the actor’s soaring popularity due to starring in Breaking Bad since Cranston’s character was killed off early in the movie. The fans were rightfully disappointed and even the actor stated that his death was a “narrative mistake”.

Director Wes Craven was a master of the horror genre. He was also more than capable of misleading the audience as witnessed from the trailer of the slasher movie Scream.

While the trailer points toward horror icon Ghostface terrorizing several victims, it seemed that Drew Barrymore’s character would be the main target and the leading star of Scream. After all, she was the biggest star among the cast members. Much to the shock of the audience, her character was killed off in the opening scenes of the movie.

No one can doubt that Alien is a hallmark of both science fiction and horror genres. The same can be said about its sequel Aliens and naturally, the expectations were sky-high for Alien 3 but it all came crashing down due to constant script rewrites and studio interference.

Apart from being one of the most disappointing movies ever made, Alien 3 managed to mislead the audience as well since the trailer assured that the movie takes place on Earth. As a result of ongoing rewrites of the script, the movie ended up on a wooden planet instead.

Every single aspect featured in the trailer of Birdman symbolized that it was going to be an action-packed superhero movie. It all made sense since the superhero movie genre was at the peak of its popularity at the time and it seemed as if leading actor Michael Keaton was tasting his superhero heyday again after the massive success of playing Batman.

The actual movie was the farthest thing from being a superhero flick. It did not even have any action. Birdman was essentially about a washed-up actor (best known for playing a superhero named Birdman) bent on revitalizing his career by starring in a Broadway play. Despite the misleading trailer, Birdman was a brilliant black comedy movie and even won an Academy Award for Best Picture.

The trailers of The Amazing Spider-Man 2 convinced the audience that Spidey would find himself in quite a predicament by facing three villains – Green Goblin, Electro, and Rhino.

While Spider-Man did engage in a battle with Green Goblin and Electro during the movie, Rhino popped up in the closing minutes. The character was hyped up in the trailers but presented without any origin tale or motivations and worst of all, the movie abruptly ends when Spidey and Rhino are about to fight.

The trailer for Bridge to Terabithia reminisces the fantasy tales of Narnia due to the two kids traveling in a forest and embarking on an adventure to encounter magical creatures such as giants and fairies.

In a contrast to the heartwarming tale shown in the trailer, the movie takes a much darker tone as the fantasy entities are revealed to be a figment of imagination by the two kids. Instead of being real, they were actually metaphors for several gloomy dilemmas faced by troubled youth such as bullying, dealing with death, guilt, and depression.

Apart from Wonder Woman, the DC Extended Universe movies have been subjected to several lukewarm reviews that range from mixed to negative. Though the franchise had a golden opportunity to make amends with the release of Justice League, things went from bad to worse.

Among the several reasons for the massive disappointment behind the movie, the most forefront is the misleading trailer. Believe it or not, more than a dozen scenes in the trailer were not shown in the movie such as Victor Stone’s pre-Cyborg state and the cool moment of Flash breaking a window with his super speed.

Luring children into the theaters is definitely an easy way of earning big bucks at the box office and the Disney movie Snow Dogs excellently capitalized on that lucrative idea. Its trailer showcases six sled dogs with the ability to talk and engage in hijinks with their new musher.

Seems like a fun movie for the kids to enjoy but actually, Snow Dogs barely relies on comedy and is essentially about a son’s attempts to bond with his biological father who gave him up for adoption. Additionally, the dogs do not even talk in the movie as falsely presented in the trailer. That particular scene was a dream sequence.

Starring Ryan Gosling, it seemed that Drive would be the next big thing since The Fast and the Furious. After all, the trailer would be riddled with gun violence, screeching tires, hardcore action, and precarious stunts.

Once the audience saw the movie with the hopes of watching an exhilarating adventure featuring cars, they were sourly disappointed as Drive was a drama movie that barely had any thrilling vehicular scenes.

It had been eight long years since the late Heath Ledger’s iconic portrayal of the Joker on the silver screen and the fans eagerly awaited Jared Leto’s take on the supervillain in Suicide Squad. The trailers promised the Joker being an integral part of the movie but as it turned out, he was reduced to a minor character and scarcely in it.

Not all Joker scenes in the trailer were featured in the movie. The fans were extremely disgruntled and so was Leto who revealed that so many of his scenes were cut that there was probably enough footage to be incorporated as a solo Joker movie.

As soon as the trailer of Observe and Report was released, comparisons to Paul Blart: Mall Cop were immediately made for valid reasons – both movies were a comedy, focused on a mall cop, and were released in the same year.

While Observe and Report, was advertised as a comedy, it unexpectedly took the audience on a wild ride by shedding light on the controversial topic of mental instability. As Seth Rogen’s character embarks on an assault spree after refusing to take his medicines, the movie can be accurately described as Taxi Driver remade as a dark comedy.

Set five years after the Spanish Civil war, Pan’s Labyrinth is a mystical tale directed by Guillermo del Toro. If the trailers were anything to be believed, the movie would be a promising one that dared to blend war-torn Spain with fairy tale creatures.

The trailer was even more horrifyingly brilliant due to the absence of dialogue. As it so happened, the decision to not include any dialogue in the trailer was a wise one since the entire movie is in the Spanish language. Though Pan’s Labyrinth is indeed a spectacular movie, it would have hardly received any mainstream attention if the trailers had revealed that the movie was in Spanish.

Directed by Tim Burton and starring his most frequent collaborator Johnny Depp, Sweeney Todd: The Demon Barber of Fleet Street is an exceptional masterpiece by the acclaimed director-actor duo.

As the trailer showcases it as a gothic movie about a barber who seeks revenge from an evil judge who falsely convicted and exiled him, the movie has it all. However, the trailer conveniently did not reveal one vital aspect of the movie – it is a musical.

In all honesty, Kangaroo Jack was a rip-off! It purposely misleads the audience about what the entire movie was all about. The trailer and heavy marketing focused on a talking kangaroo being chased by two buddies. The friendly theme of the trailer successfully managed to target a younger audience who did not all could expect what was in store for them.

As opposed to the contents of the trailer, Kangaroo Jack is a crime movie that has several violent, mafia escapades and adult content suitable for a mature audience. It is not at all a kids’ movie and the scene of the talking kangaroo was actually a dream sequence.

Did we miss any trailers on our list of the most misleading movie trailers? Let us know in the comments below!