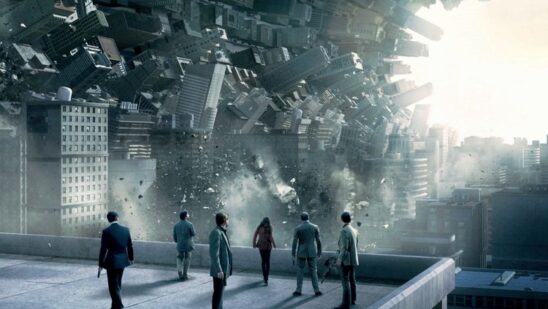 From the crazy to the comic to scary, cinematic minds have often relied on the power of dreams to express important elements of plots, introduce surreal story layers, and add new dimensions to characters. Ever find yourself pondering movie-induced dreams or dream-induced movies from the comfort of your own bed? We’ve compiled some of the best dreams from movies over the past several decades. Check out our list of best movies with dream scenes for both entertainment and motivation!

Nearly the entire movie consists of elaborately designed dream scenes, so picking just one scene from Inception is quite difficult. Inarguably, it’s a changer in film history. However, the “hallway fight” scene is often cited as the movie’s greatest triumph as it was made without the aid of CGI. With the dream in a dream in a dream in progress, Joseph Gordon-Levitt battles an agent in the hotel hallway while Dileep Rao fights motorcyclists off in the previous level.

The Wizard of Oz is one of the true classics when it comes to movies with dream scenes, nearly everyone has seen Dorothy get whisked away in a tornado to Munchkinland and search for a way home. As she encounters various flawed characters that represent people in her life, she discovers that Oz is an illusion and she can go home.

Dorothy then wakes in her bed at home, revealing the entire movie was a dream.

Raising Arizona is a classic Nicolas Cage movie in which a cop and criminal fall in love and decide to steal a baby from a well-to-do furniture store owner who had multiple.

After the kidnapping, Cage has a guilt-ridden, foretelling nightmare about a “Lone Biker of the Apocalypse” who leaves a trail of fire blazing down desert highways.

The Big Lebowski is a 90’s cult classic in which “The Dude” stars in the classic Gutterball dream scene. The psychedelic bowling-themed dream opens with Saddam Hussein as the shoe clerk, followed by a checkered scene with synchronized dancing ladies.

The Dude becomes a bowling ball, then is chased by red spandex men with giant scissors, until he wakes up running down a street and gets arrested.

In this late 80’s gem, Jeff Goldblum, Jim Carrey, and Damon Wayans play aliens who crash land in the California pool of Geena Davis, who recently caught her fiance cheating.

Davis’s dream scene is replete with all makes of aliens overtaking her house and neighborhood, dry ice smoke, oversized objects, auto-tuned voices, a cheating fiance with an oxygen helmet, and more, which makes Earth Girls Are Easy a cool fictional dream movie.

The cult classic Nightmare on Elm Street movies plays on the fear of nightmares and uncontrollability of sleep. Serial killer Freddy kills victims in their dreams, which results in real-life death.

While the special effects pale in comparison to major horror movies of today, the original movie can still keep you up at night, or make you think twice about the nap during class.

Disney’s classic floppy-eared elephant experiences a quite trippy dream in the original version of the film. After accidentally consuming champagne, Dumbo and Timothy share a hallucinatory, pink-tinted dream with the ubiquitous “pink elephants on parade”.

Perhaps it was a warning about the dangers of alcohol consumption, but whatever the intended message its purpose in the Disney flick has surely confused generations of movie watchers.

In yet another trippy Leonardo Dicaprio movie, dreams and altered reality make up the plot of Shutter Island. While viewers eventually learn that the story is neither paranormal nor an altered reality, the scenery and plot twists make it a unique psychological thriller.

In the dream sequence, the audience is introduced to some of the lead character’s guilt and repression issues, foreshadowing what was to come. The rest of the film is actually disturbing, and if being a bit restless on your mattress is not your thing, skip this film.

Jim Carrey’s beloved “dumb” character Lloyd is supposed to be driving but instead falls asleep fantasizing about returning the briefcase. In the dream, his love interest greets him with doves and hugs.

After a round of Carrey’s jokes, he comically dream-fights other potential suitors in a restaurant and then has a disturbing make-out session until a semi wakes him – ending Dumb & Dumber.

Because the true nature and purpose of dreams remain a mystery, they are perfect caravans for the fantasy world of movies. Directors thus utilize films with dreams as windows to subconscious thoughts, the future, and even as alternate planes of reality capable of affecting “real life”. Whatever your take on dreams, films can offer insight, as well as mystery and even comic relief.