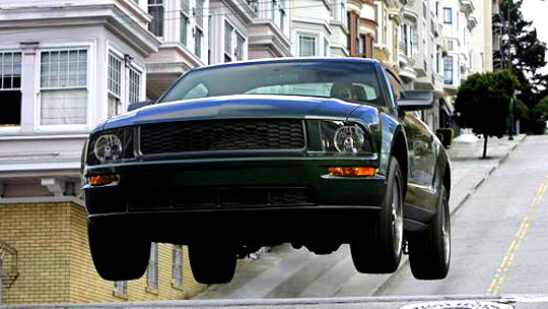 With its rolling hills and recognizable landmarks, it’s no surprise that San Francisco has been used as something of a film set over the years. From the slapstick comedy of Mrs. Doutbfire to big-budget, high-octane adventures like The Rock, many large-scale productions have used this city by the bay to provide a setting. San Francisco is renowned for its cool summers thick fog and dramatic climbs and drops, all of which have made it the perfect location for filming a dramatic car chase. Here are the 5 best San Francisco car chases from the movies that have helped put the city on the map:

The Dead Pool is part of the Dirty Harry series of films and the shortest of all the films, as well as being the fifth and final installment.

The car chase is pretty unique in that the main character Harry Callahan is pursued up and down the San Francisco hills not by a villain in a flash car but by a radio-controlled bomb.

The Rock was set mostly in San Francisco and featured a hugely over-the-top car chase scene with Dr. Stanley Godspeed (Nicolas Cage) being pursued by FBI agents through the streets of the city in a Ferrari F355.

The car chase also involved Sean Connery in a Hummer, which he used to smash to pieces a VW Beetle painted in peace signs – as this is one of the most typical symbols of the more peace-loving side of the San Francisco community, it’s obvious how the film’s director Michael Bay felt about hippies!

Perhaps one of the first-ever films to feature a car chase around the streets of San Francisco, A Jitney Elopement was a 1915 film that starred Charlie Chaplin as a ‘fake Count’ trying to woo his heroine ‘Edna.’

As you might be able to tell from the name of the film, there were no high-powered cars involved in this particular chase, just ‘jitneys,’ a kind of popular taxi of the time.

Perhaps not your usual movie vehicle for a car chase scene, the 1972 comedy What’s Up, Doc? starring Barbara Streisand features a hilarious car chase that takes in Lombard Street, a road that runs east to west through the city and has no less than eight hairpin bends.

As the street only runs for one block, the bends are extremely close together, making for some serious comedy driving and lots of potential slapstick crashes!

Bullit stars Steve McQueen and Robert Vaughan and is a 1968 thriller that has one of the most famous car chase scenes ever. It has been said that:

“Bullitt contains one of the most exciting car chases in film history, a sequence that revolutionized Hollywood’s standards”

and it features two 1968 390 V8 Ford Mustang fastbacks that get up to speeds of 110 mph as McQueen is pursued by two hitmen through the city’s streets.

The chase starts at Fisherman’s Wharf, heads up through Filbert and University streets, and ends at Guadalupe Canyon Parkway in Brisbane outside the city.

Watching these top 5 San Francisco chase scenes might well give you a taste for driving in the city, taking on the turns of Lombard Street, or the length of Geary Boulevard. However, remember that you’re not Nicholas Cage in a Ferrari so make sure you stay within the speed limits!