Home » Gaming » 15 Most Violent Video Games of All Time

15 Most Violent Video Games Of All Time 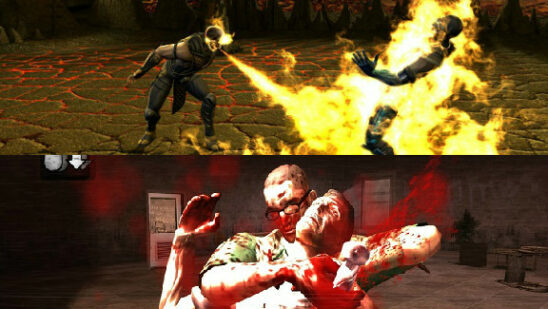 Video games are a favorite recreational pastime for a lot of people worldwide. One of the main reasons for this is that these video games allow people to do crazy, illogical, and highly dangerous stuff while keeping them safe, anonymous, and relatively out of trouble. Thanks to all this, the violent video game genre has been around and successful for quite a while now. The games in this genre often allow players to perform inappropriate, illegal, and often painful actions on others, which is why they are often kept away from gamers below the age of 18. If you fancy violent video games, then below you’ll find our list of the 15 most violent video games of all time really helpful as it includes several most popular violent video games and video game franchises: 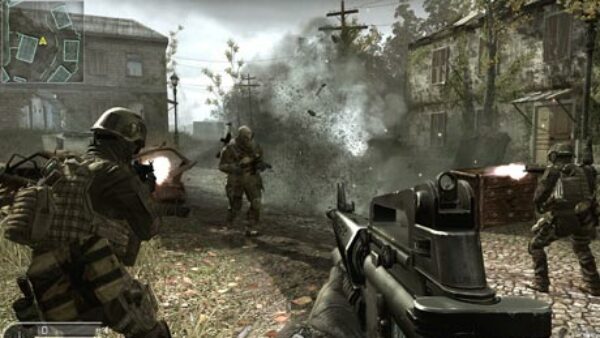 Call of Duty franchise is an extremely violent and popular military first-person shooter franchise that allows players to use a range of very realistic weapons to kill their enemies. These scenes are intensified with blood and gore. The cinematic sequences are really graphic as they depict soldiers dying in horrible ways on the battlefield.

One of the most controversial missions of the entire series which specifically caused public outcry was in Call of Duty Modern Warfare 2 (2009), where the players were disguised as a Russian militant whose entire squad opens fire at innocent civilians. 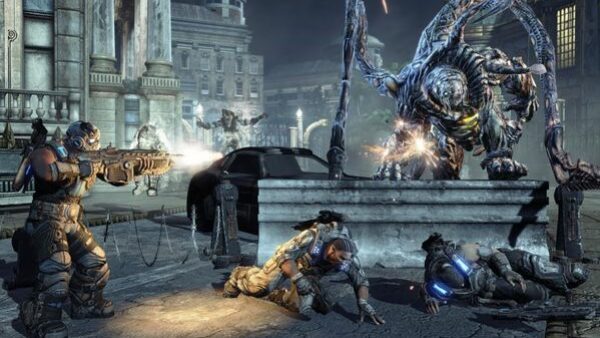 The Gears of War franchise allows players to use heavy weapons such as machine guns, grenades, and chainsaws to shoot, slice and stomp on alien creatures. A lot of these creatures don’t die out easily either, as evident by their bloody bodies attempting to continue fighting, with many of them even exploding with a splatter of blood (when attacked with certain in-game weapons).

The players too show a lot of blood when they are injured and the game promotes violence by giving players awards for creative kills such as performing a finishing move on an alien that results in a gory display of crushing skulls, dismemberment, or decapitation.

Gears of War: Judgment (2013) is the most recent and arguably the most violent title in the entire series. 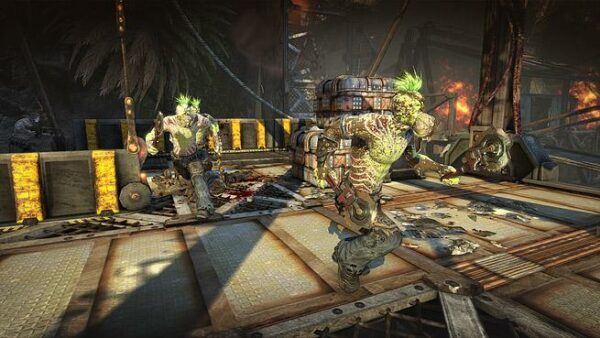 There are many violent video games in the world but developers Epic Games and People Can Fly’s Bulletstorm is one of the few that take pride in the carnage. This game rewards players for not only killing the opponents in a traditional fashion but for shredding them with creative “Skillshots” and shooting them in private areas such as the buttocks.

A lot of criticism was even aimed at the naming of certain types of kills such as “topless” for cutting people in half and “Gang bang” for killing a group. Bulletstorm also awards players handsomely with points (which they can use to upgrade their weapons) for head and groin shots. 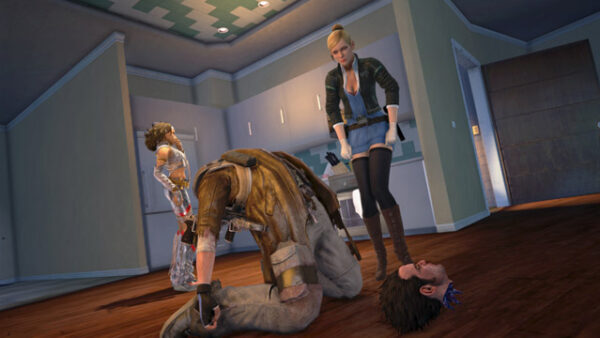 Designed to be especially crazy, NeverDead‘s demon-hunting protagonist is essentially immortal, allowing him to get broken up and yet stay alive. Players witness him being torn apart limb by limb and then watch his body parts hop around to reattach again. Players can even roll their disembodied heads into hard-to-reach places for fun.

This bloody and violent video game is definitely not for young eyes as players even shoot and slash enemies into bloody pulps using a variety of guns and blades. Cinematic scenes only add to the violence by showing extreme action in slow motion, including graphic impalements and beheadings. 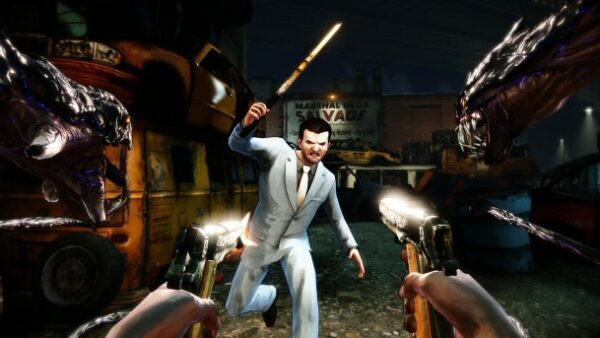 Not only is there a lot of profanity and drugs in this popular first-person shooter series, but it also allows players to kill hundreds of people and beasts throughout the game with usual weaponry such as rifles, pistols, and swords as well as with unique supernatural abilities such “Demon Arms” that literally rip people apart.

To be specific, players can literally tear out hearts, remove spines and decapitate people and creatures. Blood and gore are prime elements in this game’s visual design, therefore, you can expect a lot of “glorified” violence there (especially in 2012’s The Darkness II). 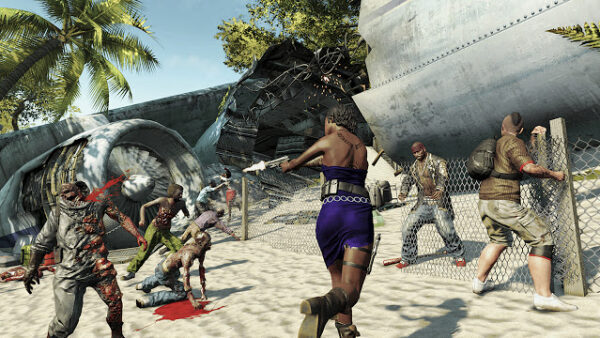 Dead Island is a very brutal zombie-centric survival horror role-playing game series that has players obliterating, ripping, and beheading tons of zombies with explicit visual details. Usable weapons include a wide array of both long-range and melee weapons. It also allows players to stomp on the un-dead zombie’s head with realistic cracking and splashing sound effects.

This game is also laden with very strong profanity, alcohol consumption, and strong sexual references. Dead Island: Riptide (2013) the latest installment offers the most graphic content so far in the entire series. 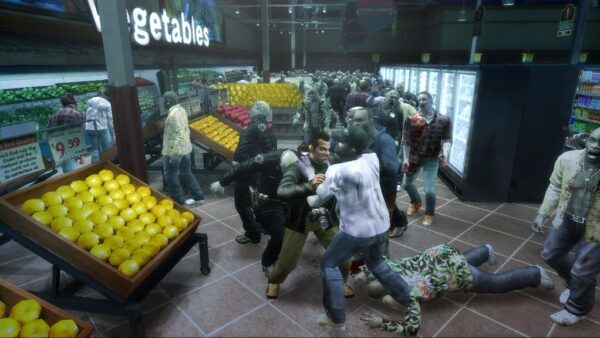 Dead Rising is an extremely popular open-world brawler video game series that combines ridiculous amounts of blood with hilarity at the same time. The conspiracy theory-centric story makes the game interesting but players will find real enjoyment from simply running around and finding new ways to massacre the massive hordes of wandering zombies.

The entire series offers some really tempestuous levels of thrashing and smashing as just about anything can be picked up and used as a weapon to smash the zombies (though 2013’s Dead Rising 3 takes the cake). 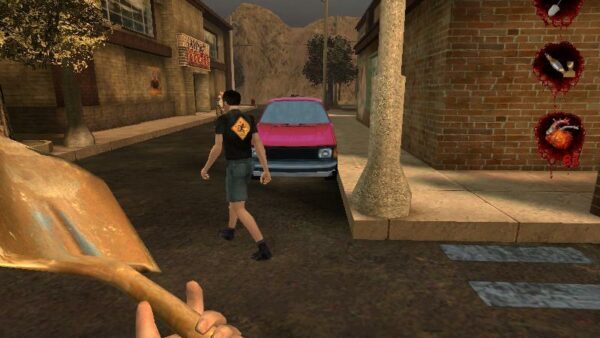 The Postal series is one of the most controversial first-person shooter series out there. Postal 2 (2003) in particular was probably the most violent video game of 2003 and was banned in several countries as the game allowed players to frequently drop-kick grenades, whip scythes at unsuspecting civilians, and wreak havoc onto characters that refuse to participate in player’s life story. It was the epitome of senseless, over-the-top video game violence that also included a lot of profanity and sexual innuendos (which nonetheless helped it to gain a lot of popularity).

Apart from Postal 2, the entire series is filled to the brim with outrageous content such as the usage of cat carcasses as silencers on guns, hitting people with heavy cow heads, and having dogs play fetch with the severed heads of torn-up victims. 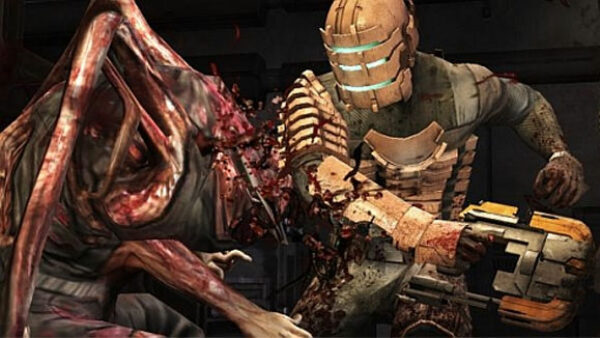 Dead Space is another well-received survival horror first-person shooter series that gives players the chance to fight back, albeit in a bloody and gruesome manner. It allows players to kill hundreds of attacking undead creatures using a wide array of weapons. Depending upon the weapon, the undead aliens explode into little chunks, get ripped in half, caught on fire, or get decapitated in a very graphic manner.

The protagonist upon losing health also dies in a very dramatic slow motion that includes close-ups of the protagonist being cut in half, decapitated, eaten alive, etc.

Dead Space 2 (2011) despite not being the latest iteration is arguably the fiercest title in the entire series. 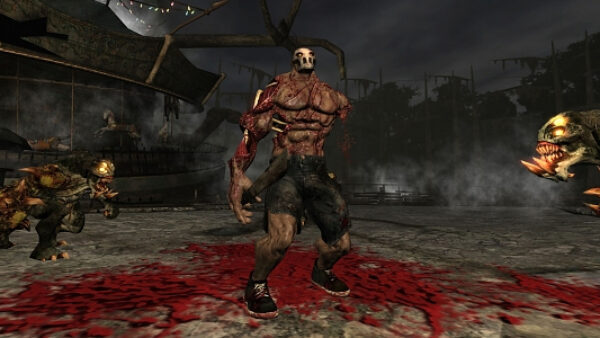 Splatterhouse is a reboot of Namco’s 1988 side-scrolling beat ’em up video game with an additional boost of violence. Players get to play as the protagonist Rick, who once again dons the Terror Mask to rescue his girlfriend Jennifer from monsters that have entered our dimension from another realm.

Although gore was an attractive selling point of 1988’s original, it was constrained by the graphical limitations of its era; which however wasn’t an issue in 2010. This resulted in the latest reboot being literally one of the bloodiest video games ever created.

As Rick rips enemies in half and uses their limbs as weapons or impales them on sharp objects, the game soaks your screen with an ample amount of blood (seriously a LOT of blood). Splatterhouse more than lives up to its name, and certainly isn’t a game for the faint-hearted. 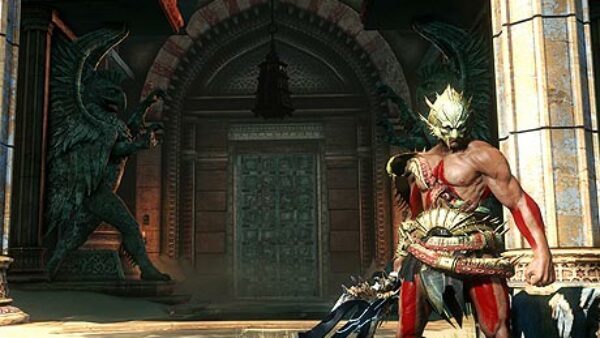 Kratos, being the “God of War”, has an image to live up to, and 2013’s God of War: Ascension certainly does pertain to his image better than all other titles in the series. Ascension contains intensely graphic, visceral combat scenes involving a wide range of fictional beasts. Only a few other games can match the blood-soaked GoW battles that contain more severed body parts or spilled innards than ever before in the entire series.

It’s grisly enough to make even grown-up gamers occasionally shake their heads in disbelief. Players use melee weapons (chain blades, swords and spears, and even mauls and hammers) to not simply kill, but also disembowel their enemies. Kratos is so vengeance-obsessed that he would horribly kill just about any creature he meets. 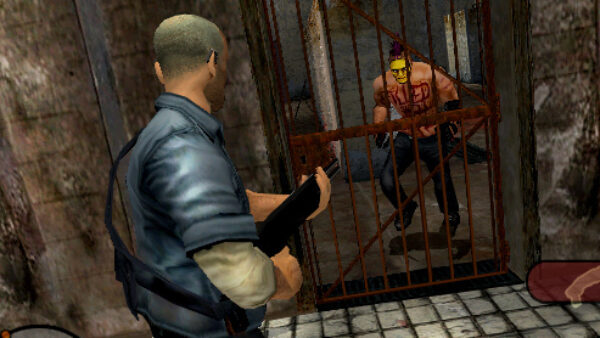 As with all of the controversial video games released to date, the Manhunt franchise and its developers also had to constantly battle censorship issues, game classifications, and worst of all, angry parents.

All of this stirred fury among critics upon Manhunt and Manhunt 2’s release, mostly because of the grotesque nature of the games. Manhunt series allowed players to sneak around a 3-D environment and commit heinous and often very violent acts of murder as part of a sadistic form of entertainment and black humor.

The series offered a whole slew of violent playable mechanics, including decapitation, steel-object-to-the-brain impaling, and even the ability to jam a sickle up an unsuspecting victim’s rear end. All of this was just part and parcel of the gruesome Manhunt experience. 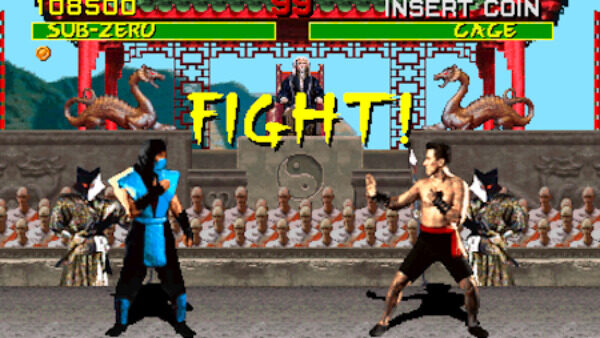 Hard-hitting, blood-soaked, and incredibly violent, the Mortal Kombat series has been an arcade phenomenon that devoured thousands of quarters in the arcade and even racked up huge console sales as well.

The entire series is one of the most controversial game series to date and had such an impact in its earlier days that it sparked a congressional hearing that ultimately led to the formation of ESRB.

Mortal Kombat titles are a pure definition of brutality and they were the first to introduce the concept of “fatalities” to the gaming world that included very graphic finishers which included a lot of blood, spinal cords, burnings, decapitations, and bodies slicing in half, etc.

Although it’s hard to figure out which title in the long-running series is the most violent one, the recently released Mortal Kombat X definitely deserves a special mention for its over-the-top fatalities. 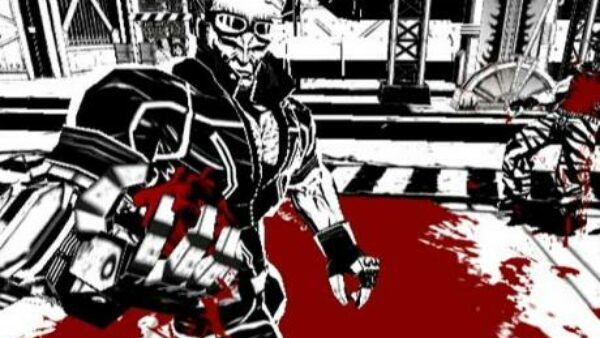 MadWorld, just as the name might suggest, was seemingly developed by a madman with a very “violent” imagination. Why? Well for starters, your victims can be splattered against the wall after being skewered on a lamppost, can be disposed of in a meat grinder, or can be placed as a board in a game of darts that includes a baseball bat.

No matter what method of killing is used by players, this game’s black-and-white backdrop really highlights the ferociousness and gratuitous violence – which effectively puts it in a class of its own. 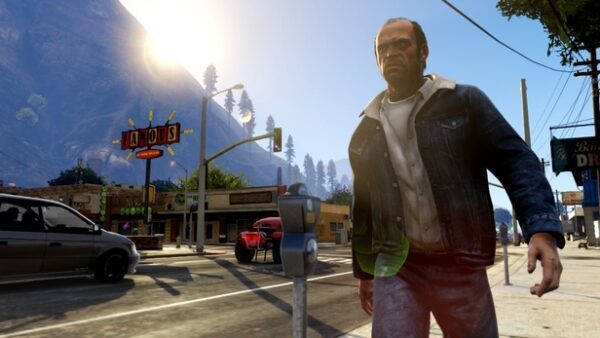 We bet you aren’t surprised, thanks to the never-ending controversies related to the GTA franchise over the years. This is GTA after all!

The latest in the series – GTA V and Grand Theft Auto V (re-release) has pumped up every bit of the gameplay from the previous entries to maximum capacity and that also includes violence!

This game allows you to kill innocent civilians in all imaginable ways – throw people off an airplane, beat them to death with a baseball bat, snipe whatever you want, ambush police, crush pedestrians with the vehicle of your wish, shoot down airliners with a jet fighter, blow away cars, boats, and planes with state of the art weapon systems, etc. Just think of a crazy thing and you can do that in GTA V, which gets even crazier when GTA 5 cheats enter the equation.

GTA V has critics cite all of these, but they usually focus heavily on a particular gameplay segment where one of the main characters – Trevor, tortures a helpless victim, and the players interactively get involved in this savage act (choosing between pulling his teeth out and electrocuting him). Now that’s what we call real violence.

This list of the most violent video games ever cannot be concluded without mentioning these gory video games also:

Violence and video games seem to go hand in hand. Share your thoughts in the comments below!