15 Best Zombie Games Of All Time 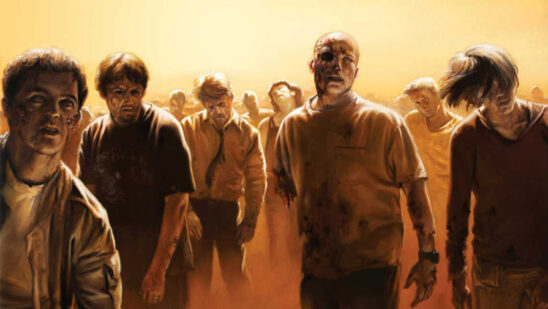 There are many genres in the world of gaming but if you really want to explore something scary as well as crazy, then the first thing that comes to mind is a ‘Zombie Game’. Zombie games are so fantastically built that you easily forget the cultural reinforcements of conventional first-person shooters and just move to lump blood over the top. Zombie video games are popular because of their unique scary atmosphere, horror cut-scenes, jump-scare moments, unmatched fun, and hours of endless zombie smashing. Here is a compilation of 15 of the best zombie games of all time that made the entire zombie concept popular. These games have been ranked based on their gameplay, graphics, storyline, controls, level of destruction, and the zombie factor: 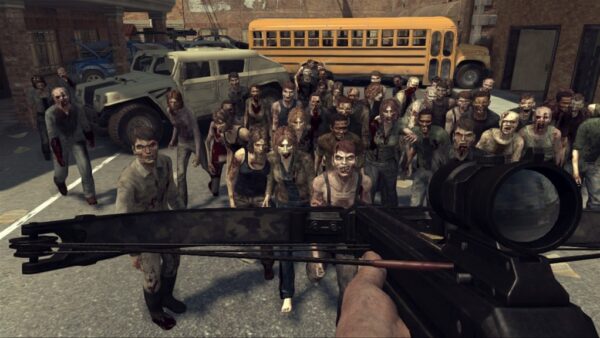 Walking Dead Survival Instinct is a first-person shooter zombie video game, and a prequel to the Walking Dead TV series that features Daryl Dixon, who fights the walking dead (can also sneak past them) on his journey toward Atlanta. The player can come in contact with random survivors and can decide either to help or leave them.

The player has to critically analyze the food, ammo, and fuel he has to make strategic decisions that will define the fate of his entire group. While a traveling player has two options, either to take the highway and save fuel or otherwise use small roads to villages to collect some supplies.

Although the game wasn’t received well by critics due to its repetitive gameplay, it is still worth mentioning here in this list thanks to its strong zombie factor! 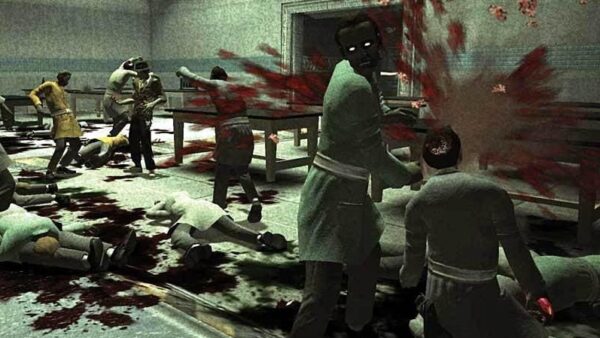 Stubbs the Zombie is a third-person action zombie video game in which the player acts like a zombie and kills humans by devouring their brains. Eating numerous brains provides the player with a certain amount of lost health. The killed human turns into a zombie and then fights alongside the player. The dead human beings still change into zombies if a player beats them to death with melee strikes instead of devouring their brains.

The game features various unconventional makeshift weapons (made from organs) as the player is a zombie. The game also features various vehicles. The main attraction of the game is nonetheless, Stubb’s ability to build, grow and command a zombie army (the newly created zombies eat other human beings to turn them into zombies too – thus making more and more zombies with time). 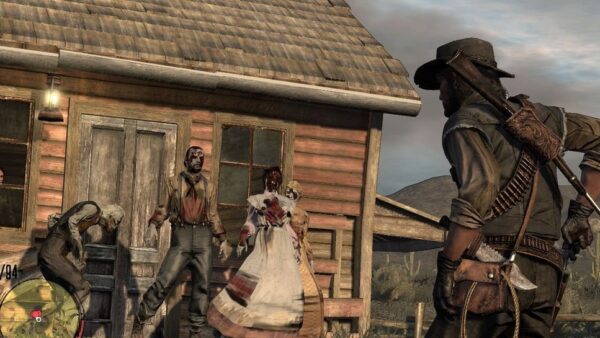 Red Dead Redemption: United Nightmare pits the central character John Marston against zombie elements incorporated into the original American Old West setting of the Red Dead Redemption. Players can easily loot and hunt zombies and mythical animals with various new weapons in this open-world game. The Four Horses of The Apocalypse can also be controlled by the players which can affect the attacking zombies and the environment in different unique ways.

The game also offers a multiplayer mode called ‘Undead Overrun” in which four players can work together to defend against relentless waves of zombies. 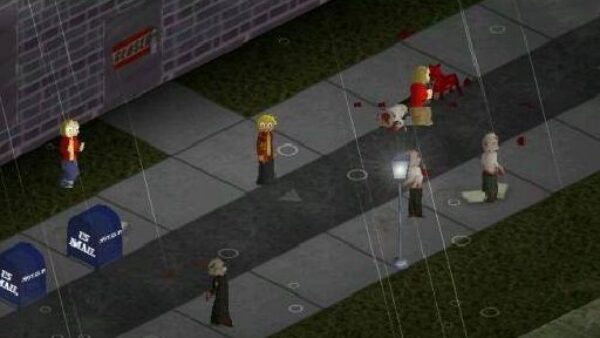 If you have zombie fantasies, then Survival Crises Z will definitely aspire you to the haughtiest of heights. The game offers two game modes, Arcade Mode and Story Mode. In arcade mode, the player runs around the street while killing zombies for points and to stay alive as long as possible.

In the story mode, the player starts in the street going through safe houses occupied by one of the two main factions of the game, SWAT and Rebels. Players can either join any of the factions to get missions or remain neutral. There are a number of strategies that a player can employ which make this zombie game really cool and unique. 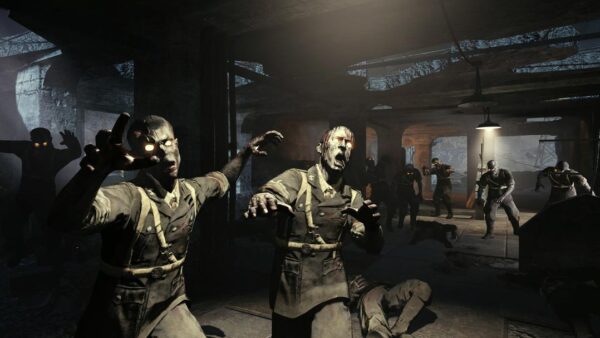 Call of Duty: Black Ops is a very popular first-person shooter from the critically acclaimed Call of Duty franchise that features a ‘zombies’ mode to allow players to blast off waves upon waves of attacking nazi zombies. In the game, the player assumes the role of a foot soldier wielding various firearms and grenades.

This co-op mode allows the player to buy new and powerful weapons, bullets, and other accessories with the help of the points earned for killing the zombies. The gameplay is really unparalleled and super addicting. 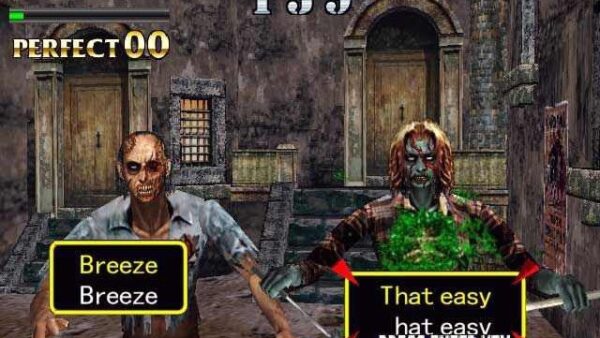 The Typing of the Dead is an arcade first-person rail shooter that taught a unique lesson to the gaming world which is, killing a zombie with keystrokes is more satisfying than killing it with mouse clicks. It is, in fact, the most “entertaining typing tutor” of all time.

As obvious from the title, the most innovative fun factor in this game is its input method – instead of the mouse button you need to type out specific words displayed on the screen as fast as possible to kill off the zombies advancing toward him. Day Z is an award-winning zombie MMORPG game that actually is a mod of ARMA 2: Operation Arrowhead tactical shooter. The game features some really innovative gameplay elements such as bone fractures, shock, infection, and fatigue. The game has received global critical acclaim and some critics even call it the best zombie game ever.

The survival element is heavily sewn into the fabric of Day Z and the gameplay heavily involves survival factors that force the players to fight for some very basic human needs such as thirst, shelter, and hunger. The gameplay does involve weapons and the killing of zombies but a player can also avoid combat with zombies entirely.

The game is really unique and has a thrilling atmosphere that can fully satisfy the appetite of any zombie game lover. 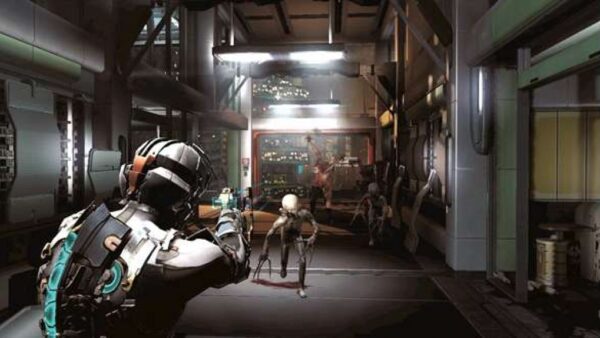 Dead Space 2 is a futuristic survival horror third-person shooter game that has better horror moments than most of the cheap Hollywood thrillers of today. The protagonist Isaac Clarke, throughout the game battles the Marker that awoke the undead while solving different puzzles.

The gameplay features some really unique elements such as zero-G environments (where Isaac is capable of moving in all directions with thrusters attached to his ensemble), a holographic display of information that never intercepts the gameplay, and an instant objective path guide that helps players to navigate to right destinations.

Dead Space is not for the faint of heart and its dark and dreary atmosphere can give plenty of sleepless nights to gamers. 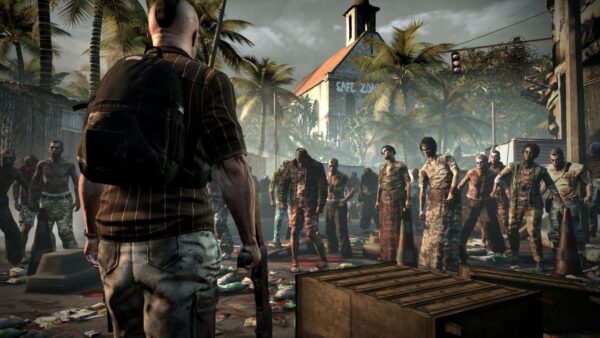 Dead Island is an open-world first-person role-playing zombie game focused mainly on melee combat. It features four players’ cooperative gameplay in which a player can choose one of the four main characters to start completing the campaign missions. In Dead Island, you will score XP by fulfilling objectives and by killing zombies.

The game features an extensive damage scheme for zombies depending upon the spot where the player hits them. Each zombie in the game has its own strength bar and level which scales along with the player as they progress to the next level.

The game has different types of zombies such as Walker, Thug, Ram, Floater, Suicider, and Butcher all having their own characteristics and weaknesses, which gives players a very versatile challenging atmosphere. 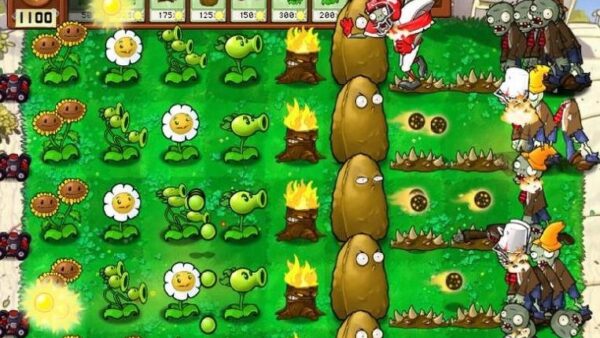 When it comes to an epic battle between carnivores and herbivores, Plants vs Zombies can top any list. It’s a tower defense action video game that involves the struggle of a homeowner who uses varieties of plants to repel a horde of zombies from eating the brains of the residents of the house. The game has several levels in which the gameplay varies to a large extent and becomes really challenging gradually.

The game starts out in a front yard progressing to the visit of the backyard and also features various levels at nighttime (which changes the gameplay entirely). 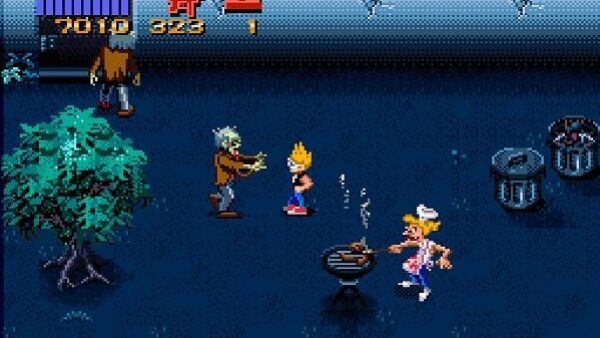 Zombies Ate My Neighbors is a run-and-gun/top-down action shooter video game that was introduced in 1993. The theme behind this game is that there are two characters Zeke and Julie who have to save their neighbors from the ostensible zombies.

Players can equip a single weapon and single item at any time but there are a variety of other weapons and power-ups scattered across each game level. The basic weapon at the start of the game is the holy water-filled squirt gun but later on several other weapons such as ice-pops, weedwacker, etc become available. 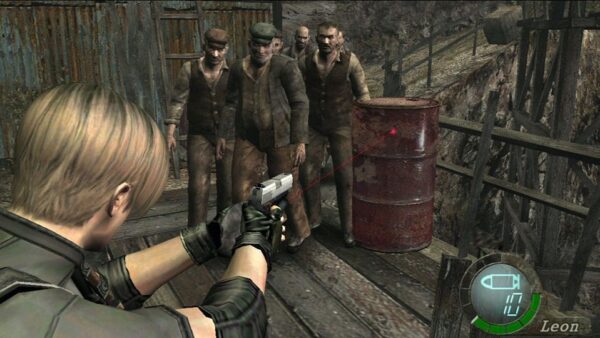 Resident Evil 4 is a survival horror game from the popular Resident Evil franchise, that changed the RE series forever. RE 4 introduced revolutionary action-oriented gameplay features that still inspire many top-of-the-line third-person shooters. RE 4 introduced the innovative ‘over the shoulder’ third-person perspective that we now can find in almost all 3rd person video games, therefore it wouldn’t be wrong to call Resident Evil 4 the ‘Mother of all Third Person Shooters’.

The game follows the quest of special agent Leon S. Kennedy whose on a mission to salvage Ashley Graham, the President’s daughter, who’s been abducted by a sinister cult.

RE 4 was also revolutionary in the sense that there were no zombies but rather new enemies called Ganados (that were not part of any previous RE game), no Cerberus, no crows, no giant snakes, no giant spiders, no tyrants, and no lickers. It was also the first Resident Evil game that supported widescreen resolutions. Dead Rising 2 is an interesting action-adventure zombie game that redefined melee combat forever. With over 7000 zombies present in a single scene, DR 2 forced players to re-imagine the scale of a zombie-infested open world.

Certain new elements were introduced in DR 2 such as ‘Combo Cards’ which help players to fuse together two of the many weapons that make zombie killing not only easier but more lucrative also.

The zombie chopping and threshing in DR 2 is really out of this world and no other game can match its unique taste. You can chop zombies for hours and still can’t resist the urge to do a little more. 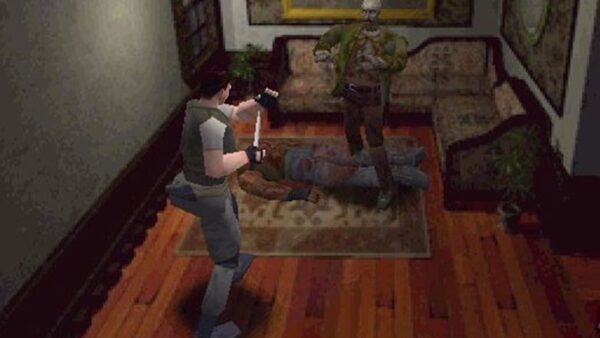 The game begins with Jill Valentine and Chris Redfield trapped inside a deserted mansion situated on the outskirts of Raccoon City and revolves around double agent Albert Wesker and the notorious T-virus. The catchy storyline ensured Resident Evil’s quick evolution into a multi-million dollar franchise.

Resident Evil is a rare gem when it comes to a perfect blend of action adventure and horror. The storyline and gameplay of the title were a trendsetter and enjoys the status of a cult classic. The biggest sin a gamer can commit today is to ignore Resident Evil as the game remains enjoyable to this day! 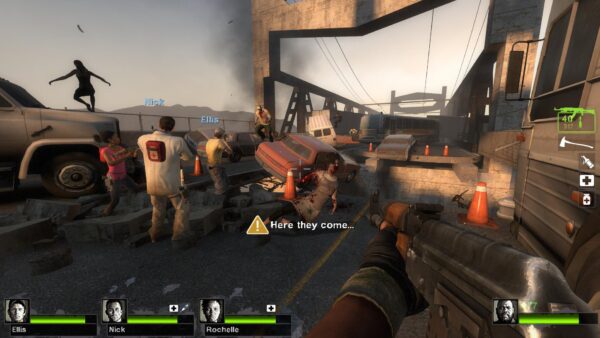 Left for Dead 2 was the sequel to the award-winning Left 4 Dead the first-person shooter video game, which was also the number 1 cooperative game of 2008. Left 4 Dead 2 redefined zombie games and embedded multiplayer with the zombie genre very well. The scare tactics and terrorizing atmosphere of the game have convinced many critics to consider it one of the best zombie games ever.

LAD2 focuses on four survivors who fight their way through five campaigns, interspersed with safe checkpoints with the goal of escape at each campaign’s finale. The game features dozens of weapons, various melee weapons, and various types of zombies (each having its own notorious abilities – we have always hated ‘the witch’ and ‘the spitter’).

Which of the above-mentioned best zombie video games of all time is your favorite? Would you like to add some other zombie game titles to this list? Let us know in the comments section below!