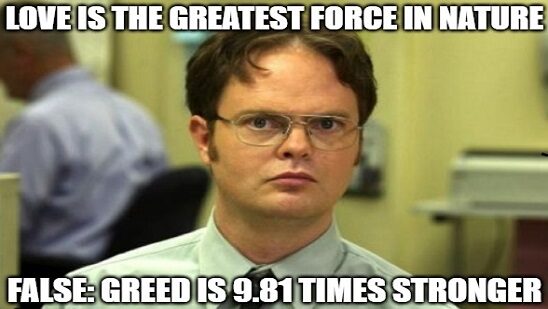 Greed is defined as an excessive or rapacious desire, especially for wealth or possessions, according to Dictionary.com. As Americans, we all have had our fair share of greed, whether through personal experience or through watching others. This is the land of plenty after all; the land where “what you have is decent but what I have has to be 100 times better.” Along with greed, people are also very familiar with movies. Greed and movies – it’s the perfect American package. Sprinkle in a little pretentiousness and overpriced sports cars and it’s the ultimate American package! Okay, I’m being a bit facetious; America truly is a great country, but sometimes our greed gets the best of us – and the following top 5 great films about greed are prime examples:

How the Grinch Stole Christmas (Based on Dr. Suess’ book), the 1966 cartoon movie version follows a grumpy old hermit who tries to steal Christmas from the Whos of Whoville. Not many Americans are unfamiliar with the tale as it’s a classic example of greed.

A remake of the movie was made in 2000, which starred Jim Carrey and Taylor Momsen. In the end, the ‘Grinch’ learns that he can, in fact, be a good person. Oh, happy endings are the best.

This 1987 movie involves the main character named ‘Bud Fox’, played by Charlie Sheen, and a bad guy named ‘Gordon Gekko’, played by Michael Douglas. Douglas actually won an Oscar for Best Actor as the slimy, selfish Gekko who proclaimed that “greed, for lack of a better word, is good.”

The Reagan administration is the basis for the film and follows a corrupted stockbroker who discovers that the magnetism of money is irresistible.

Back when Vin Diesel was taken somewhat seriously and Ben Affleck took small, supporting roles, Boiler Room swept them up in 2000. A college dropout, played by Giovanni Ribisi, gets a job as a broker at an investment firm that eventually proves to be crooked.

In one scene, the young, power-hungry characters even recite some lines from Wall Street as if the words are from the Holy Bible itself.

This 2000 film focuses on a young investment broker, played by Christian Bale, who is obsessed with the concept of money and all aspects involved- especially fashion and material objects.

He dresses impeccably and even goes to great lengths to ensure that no blood spills anywhere in his apartment while murdering a business rival with a chainsaw. The name certainly fits the bill.

Tom Cruise. The end. No, but seriously, this 1996 film features a sports agent named ‘Jerry Maquire’ (Cruise) who voiced the infamous line that ultimately led to his decline:

This translated to his bosses as:

“I want to do less work and make less, but regain my sense of self again.”

The problem is, that sports agents don’t necessarily want to feel good about themselves unless they’re making a decent amount of money as well.

They slaughter Maquire’s entire business, which leaves him with an exaggerated, under-the-radar star, a fresh and uncompromising assistant, and a kid who could tell you how much the human head weighs (8 pounds).