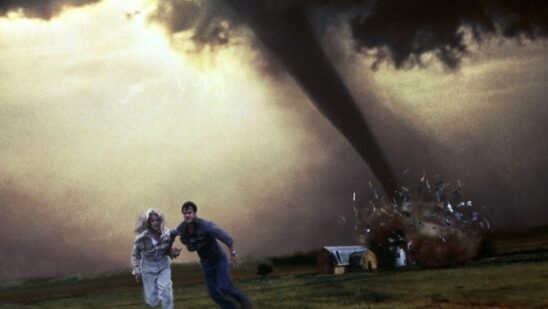 If there is anything kids love from Hollywood, it’s a natural disaster. Why? They make for incredible stories. The appearance of a natural disaster might give the characters an opportunity to find a friendship that was never there (as in “The Perfect Storm”) or reveal something about the characters’ relationships that might not have otherwise been exposed (see: “Twister”). Gigantic natural disasters serve not only as a plot device but sometimes they serve as the villain itself – removing the need to hire a big-name actor to shake things up. With that in mind, let’s review the best natural disaster movies for kids and examine what makes them so engaging and, sometimes, even fun:

This 2009 science fiction film garnered global acclaim for its real-to-life visual effects and CGI which were used for portraying some of the most epic cataclysmic events in a film.

The story revolves around the disastrous events of the 2012 (2012 phenomenon) and the subsequent survival of human beings. Although the film only managed to get mixed reviews for its storyline, strong acting and solid graphics allowed it to get blockbuster status at the box office.

Whatever you have to say about the science of global warming causing an instant ice age in 2004, you can’t deny that the prospect of extreme weather worldwide makes this movie at least visually engaging.

The movie portrays everything from giant chunks of hail to tornadoes in Los Angeles to extreme blizzards covering entire continents – and the storm hardly lets up throughout.

This disaster movie is all about what’s going on beneath the Earth, as the title suggests, but they have plenty of trouble with storms on the surface while the heroes are trying to save the day.

Yes, the premise is shaky (nuking the Earth’s core to save the planet?), but there’s no doubt that the entire movie is a pure guilty pleasure.

Does a volcano eruption count as a huge natural disaster? It does when an entire city sees ash, smoke, and fire raining down on it like it’s the end of the world. Although Dante’s Peak has less to do with climate than it has to do with geology, it deserves a listing here because it’s such good, honest entertainment – and it follows the familiar formula of natural disaster movies.

You have the classic “skeptical scientist,” the “person who doesn’t want to be rescued,” and even James Bond acting as the hero. What’s wrong with that?

Suffice it to say, The Perfect Storm is also ‘The Perfect Movie’ if you love rain, rain, and lots more rain. It also packs some major star power with George Clooney, Mark Wahlberg, and actors like John C. Reilly getting into the mix.

Is this the “Citizen Kane” of natural disaster movies? Maybe, maybe not – but what we do know is that Twister delivers major special effects for its time (1996), plenty of action (an outbreak of tornadoes, based on plausible scenarios – especially considering it’s set in Oklahoma), and a cast of colorful characters that include a young Phillip Seymour Hoffman.

Did we miss any of the best natural disaster movies for kids on our list? Let us know in the comments below!