World War II was a dark time for the older generation, but a remarkable action-packed one for the newer generations. It was the classic good vs. evil battle, with very little politics involved and that is why many people wish to relive the ‘glory days’. While time-traveling back to the 1940s isn’t possible, these 25 best World War II movies of all time will make you realize just how big of an impact World War II had on humanity: 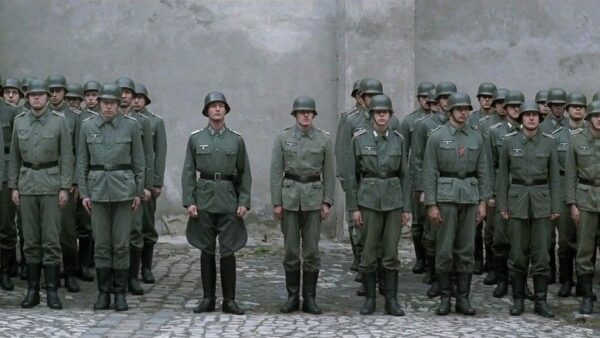 Stalingrad is a 1993 film that follows the progress of German officer Hans von Witzland and his battalion as they fight in the Battle of Stalingrad in 1942-1943.

After having half their number wiped out and being placed under the command of a sadistic Captain, Hans von Witzland leads his men to the desert where they attempt to escape from the city that is surrounded by the Soviet Army. 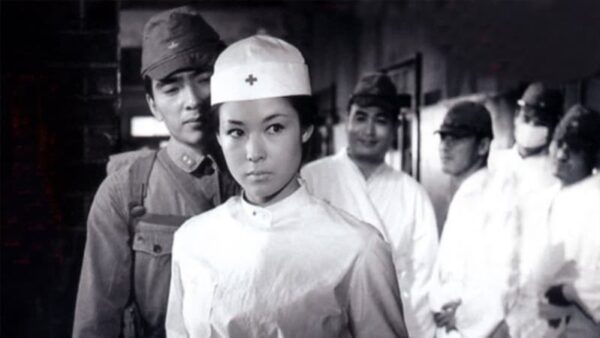 Red Angel follows the story of Sakura Nishi, a young army nurse who is sent to field hospitals in China during the Sino-Japanese war in 1939. She assists the surgeon Dr. Okabe and gives sympathy to the soldiers who have no hope of returning home.

Nishi falls in love with Dr. Okabe even when he is impotent at times because of his Morphine addiction, and follows him to the frontlines of the battlefield. 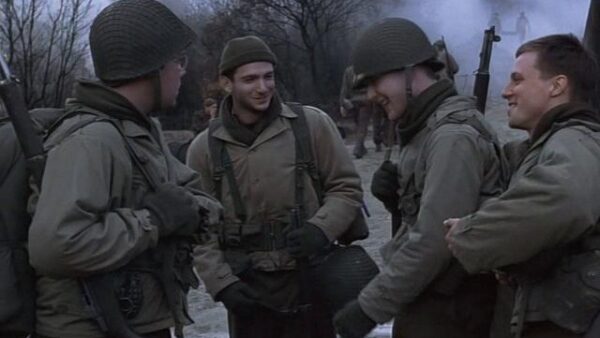 When Trumpets Fade is set in Western Germany during WWII. The story follows David Manning who reluctantly leaves behind a mortally wounded soldier and searches for survivors from his platoon, only to learn from the commanding officer that they have all been KIA (killed in action).

Despite requesting a discharge, claiming mental disability, Manning is promoted, and assigned to lead a new platoon of young inductees into the Battle of Hürtgen Forest. 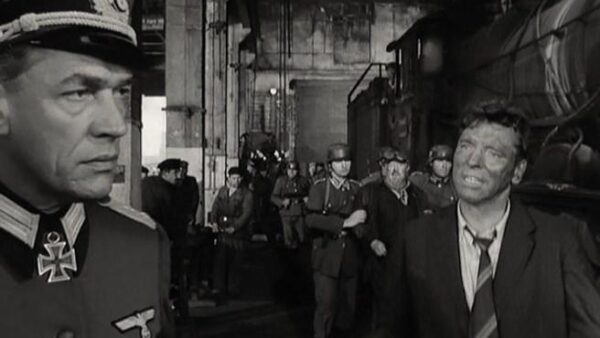 The Train is a story about the French Resistance member Labiche going against the Germans Colonel von Waldheim, who attempts to smuggle valuable artwork into Germany by train, by creating an elaborate ruse that helps keep the train within the border of France.

The film, although having no direct relation to World War II, tells the tale of how many people tried to take advantage of the chaotic time period. 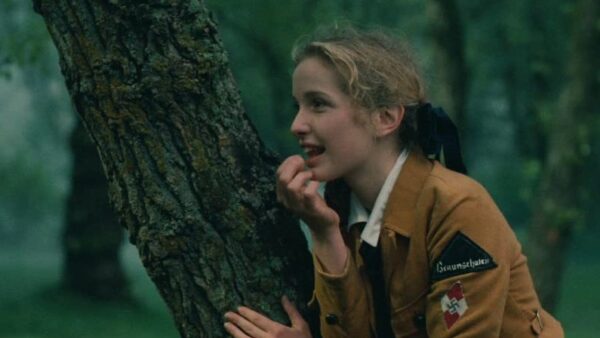 Europa Europa is based on the true story of a Jewish boy who is separated from his family in the early days of WWII. Since he poses as a German orphan, he is thereafter taken into the heart of the Nazi world as a ‘war hero’ and eventually made a part of the Hitler Youth.

Although improbabilities and mistakes are common in the film, it is based upon a true story that beautifully shows an intense emotional struggle of a boy to find his family. 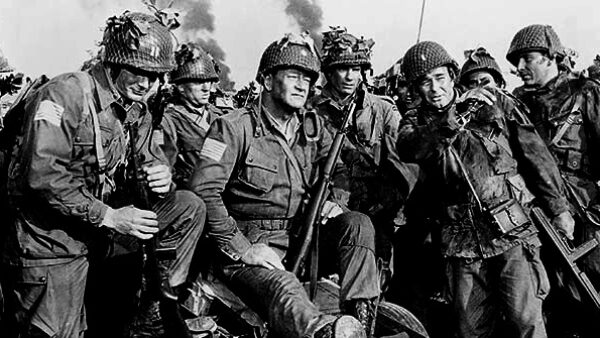 John Wayne in The Longest Day

The Longest Day is a retelling of June 6, 1944, aka D-Day. The story is told from the perspectives of the Germans, the British, the Americans, and the Free French.

The plot revolves around Marshall Erwin Rommel who tours the defenses that are being established as part of the Reich’s Atlantic Wall in an effort to stop the upcoming Allied attack who are just waiting for the weather to calm down. 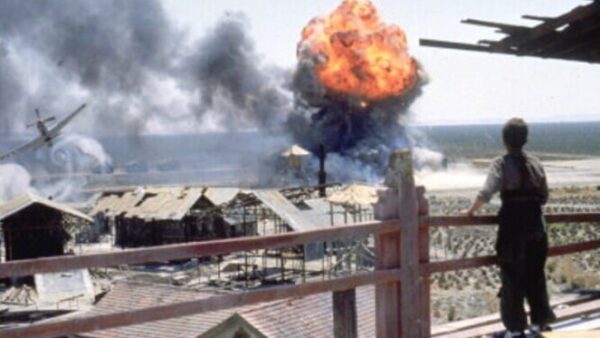 Empire of the Sun is based on J.G. Ballard’s autobiography. The movie is about a boy, James Graham, whose privileged life is destroyed by the Japanese invasion of Shanghai on December 8, 1941. He is separated from his parents and taken to the Soo Chow confinement camp.

The movie shows Graham attempting to bring spirit and dignity to those around him amidst the sickness and food shortages in the camp. 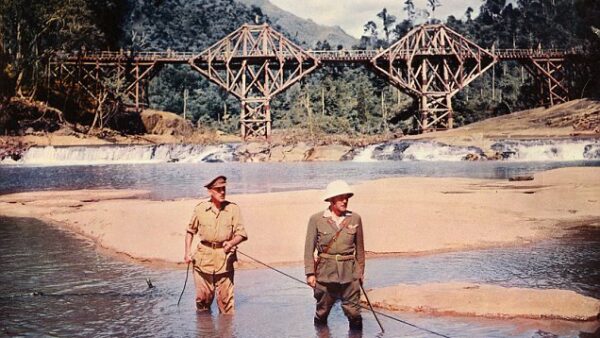 A 1957 British-American World War 2 film based on the novel of the same name, the movie tells us the tale of a POW camp that is ordered to build a bridge to accommodate the Burma-Siam railway, even though the POWs feel they shouldn’t.

Colonel Nicholson being the leader of the group faces much torture as he refuses to compromise his principles for the benefit of the Japanese commandant Saito. 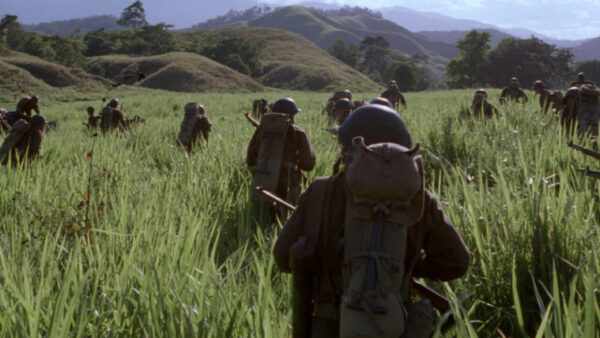 This film takes place in 1943 as the U.S. offensive of World War II is drawing to a close in Guadalcanal and to put an end to this campaign, the US army arrives with a full division of troops and equipment.

The story is about how the division is exploited by a power-hungry Colonel, a war-weary Sergeant, a Private whose AWOL-ed, and a Company Commander who’s struggling with his abilities as a leader. 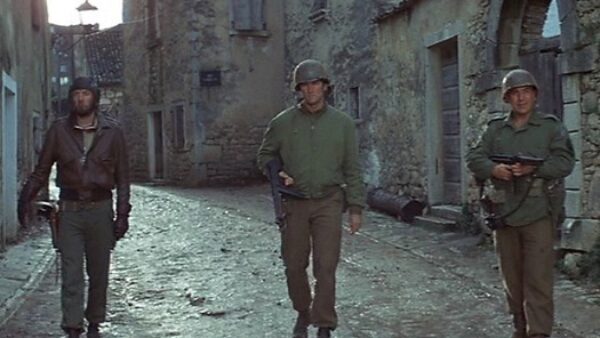 As a refreshing change, Kelly’s Heroes is a war comedy film that tells the tale of Lieutenant Kelly who leads his men, deep into the French enemy lines to rob a German bank that is speculated to have $16 million worth of Gold Bars.

The team members, each having a unique characteristic, make for a great funny film. 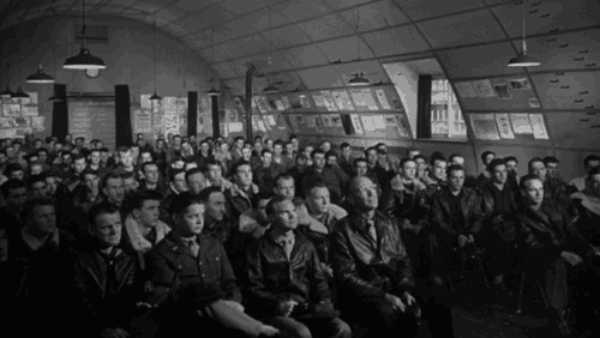 Twelve O’Clock High is based on the aircrews of the United States Army’s Eighth Air Force who flew daylight bombing missions against Nazi Germany during the early days of American involvement in World War II.

The story deals with their struggle to cope with the staggering losses of WW2. The film was highly praised for its intelligent use of actual combat footage. 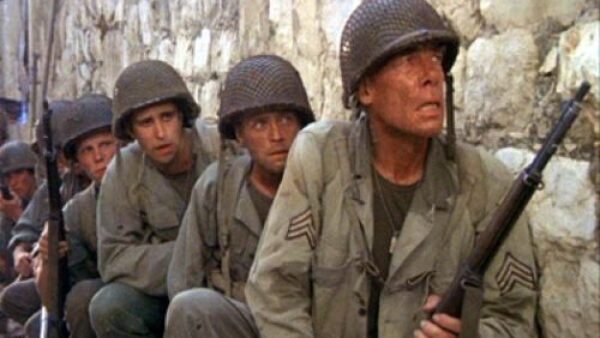 A grim film that talks about the horrors of seeing people die and those very people being replaced. A veteran sergeant of World War I returns to serve his division in World War II along with 3 other continuous survivors on D-Day at Omaha Beach.

These soldiers then experience the cruelty of war as people all around them die, eventually feeling survivor’s guilt. 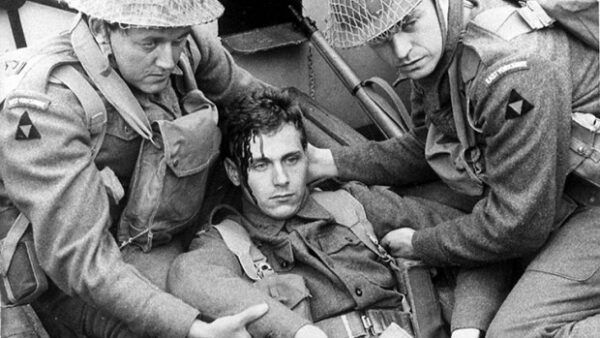 Overlord is set around the D-Day invasion (Operation Overlord). The movie tells the tale of Brian Stirner, an ordinary man who wishes to get trained and be enlisted in the Army that is preparing for D-Day.

The story is about Brian’s training, his affair with a lovely woman, his journey, and finally his premonitions about his death that lead to the actual event itself. 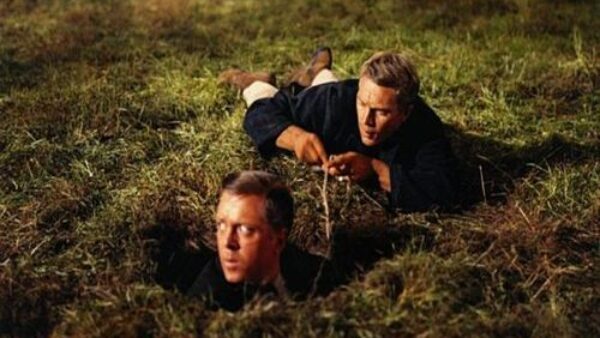 The Great Escape is based on a true story about a group of allied prisoners of war (POWs) who are all put in an ‘escape proof’ camp.

These POWs are all escape artists who try for the first half of the film to outwit their jailers to dig the escape tunnel in hilarious, comedic ways while the second half shows their adventure as they use boats, trains, and planes to get out of occupied Europe. 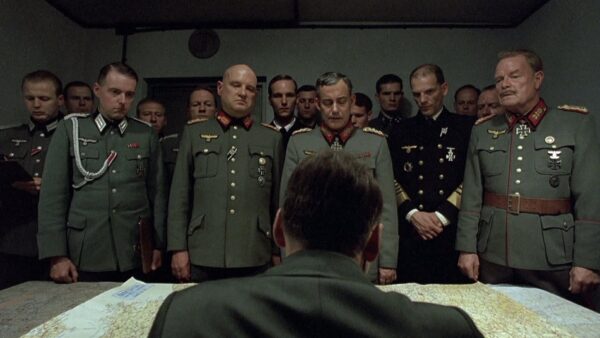 Downfall is a German war film that takes place during the final ten days of Adolf Hitler’s reign over Nazi Germany in 1945.

The film is based on the book series Inside Hitler’s bunker, Traudl Junge, the final secretary that Adolf Hitler had, narrates the Nazi dictator’s final 10 days that he spent in his Berlin bunker at the end of WWII. 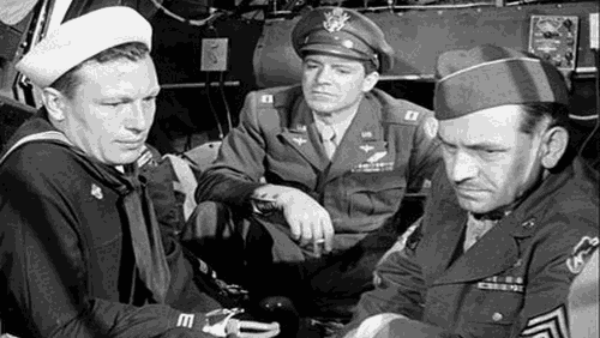 A drama film that tells the tale of 3 WWII veterans who return home to America to re-adjust their lives as they once were as civilians only to discover that it is more difficult than they ever thought.

Al Stephenson finds himself unable to cope with the new financial realities, Fred Durry returns to a broken marriage and difficulty in keeping a job and Homer Parrish struggles to find out whether his wife still loves him, or is merely showing pity. 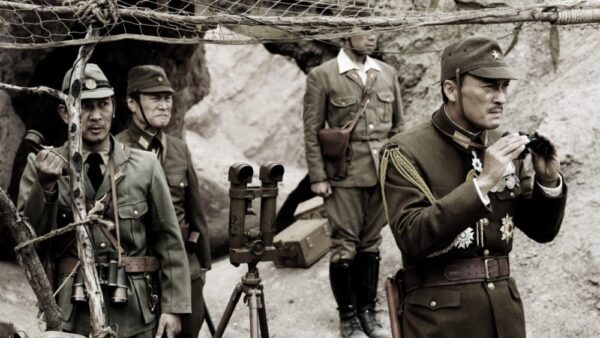 Letters from Iwo Jima is an American war film that is in fact fully in Japanese. It portrays the story of the Battle of Iwo Jima, which took place between the United States and Imperial Japan during World War II, from the perspective of the Japanese military.

Letters from Iwo Jima contrasts with its sibling movie, “Flags Of Our Fathers”, which portrayed the same battle from the American perspective. 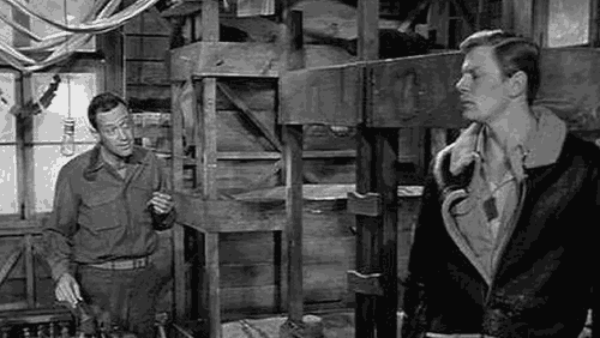 A comedy and drama war film from 1953, this World War 2 movie tells us about a group of American airmen held in a German World War II prisoner of war camp, who have started to suspect that one of their members is an informant.

The movie was praised for its cast and it was revealed later on that not even the actors knew who the real informant was, which lead to an epic portrayal of emotions. Patton is an American biographical war film based on General George S. Patton. The film depicts Patton’s career in North Africa and his progress through the invasion of Europe and the fall of the Third Reich.

Side plots also speak of Patton’s faults that would prevent him from becoming the lead American general in the Normandy Invasion as well as his dismissal from being the Occupation Commander of Germany. The only animated film on this entire list, Grave of the Fireflies is a semi-autobiographical film that tells the story of Setsuko and Seita who struggle to somehow keep a roof over their heads and food in their stomachs.

When their resources are in short supply and they are gradually succumbing to hunger, their only entertainment is the light of the fireflies. A German 1981 epic war film that is set during the time when Destroyer class ships were outweighing U-boats.

It tells the story of a U-Boat crew and how these submariners maintained their professionalism as soldiers attempted to accomplish impossible tasks all the while attempting to understand and obey the ideology of the government under which they served. 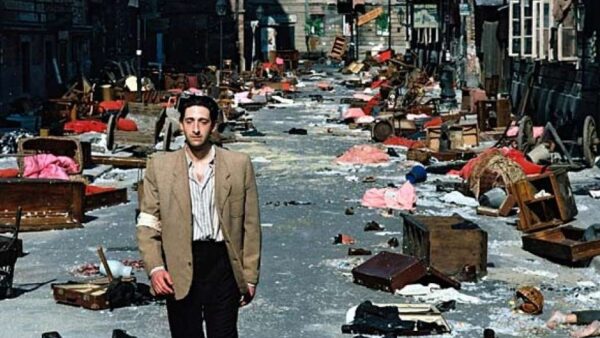 This film is a biographical war film that tells the tale of a Polish Jewish musician who escapes capture by the Germans who are taking the Jews to concentration camps, and how he manages to elude the Germans and escape deportation by living in the ruins of Warsaw – all while seeing the people he loved being captured. 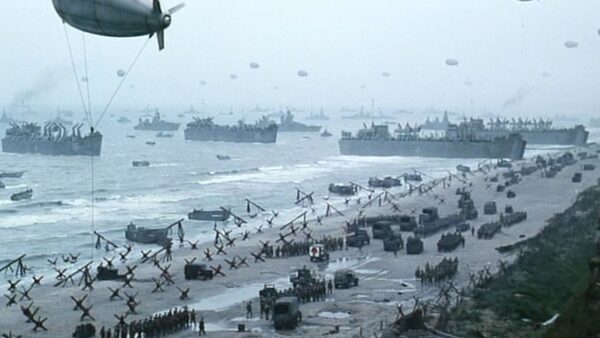 A tremendously successful epic war film, Saving Private Ryan is a tale about a group of soldiers who get Presidential orders to find and rescue a missing soldier who has lost every single one of his brothers in the war.

The group of eight soldiers dies one by one as they reluctantly set off to accomplish this brave task. A well-regarded epic historical drama film that is based on the highly successful novel “Schindler’s Ark”. The story is about Oskar Schindler, a German businessman who becomes concerned for the Jews after witnessing their persecution by the Nazis and decides to hire as many as he possibly can to save their lives.

The film was critically acclaimed universally for its realistic (black and white) and intense portrayal of the Nazi concentration camps. Being directed by the legendary director Steven Spielberg, Schindler’s List is often hailed among the greatest war movies ever. Come and See is a brilliant war drama and psychological thriller that is set during the Soviet war that occurred in the German-occupied Byelorussian SSR.

The plot is centered around Flyora and Glasha who are forced to team up with the unequipped Soviet resistance to fight against the German forces. They then witness the brutality of war and survive horrifying situations that force them to lose their childlike innocence and finally, their minds.

Our list of the best world war 2 movies of all time can’t be concluded without honoring these names:

Which of the above-mentioned best world war II movies of all time is your favorite? Share your choice with us in the comments section below!