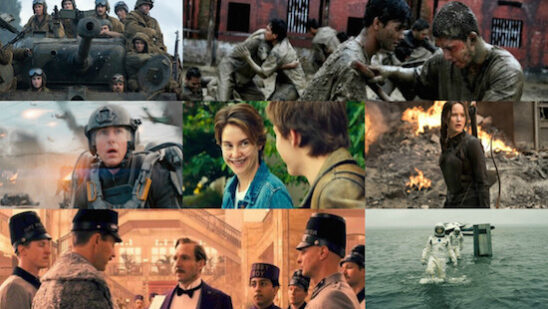 From apes dominating the planet Earth to epic space journeys, the year 2014 was truly a remarkable one when it comes to the big screen. It was a hectic year for Hollywood as far as the eye could see. A lot of the movies were good but only a few are impressive enough to be known as great. The following list chronicles the best movies of 2014 that enthralled the world.

Despite the fact that film adaptions of novels targeting the teenage audience have been a victim of a tremendous amount of criticism over the years, director Neil Burger proved otherwise with his film, Divergent. Based on the novel of the same name by author Veronica Roth, the movie explores the dystopian city of Chicago in a distant future divided by Abnegation, Amity, Candor, Dauntless, and Erudite.

The movie became a huge success for production company Red Wagon Entertainment due to its science fiction marvels with a slight touch of romance, thrill, and even humor. For a movie relying on two actors as the leading male and female roles who had not even become stars yet, Divergent is a striking one.

Earth is nothing more than an enigmatic design that plays games with its inhabitants just like mice in a maze. The captivating plot of The Maze Runner catapulted its possible status as just another dystopian film to one of the best movies of the year and proves that the rookie director Wes Ball had nothing to worry about the fate of the movie since the storytelling was incredible.

Based on the novel penned by James Smith Dashner, the movie follows the unlikely story of Thomas, a sixteen-year-old boy who has lost his memory. His curiosity about the mysterious place beyond the Glade incites an adventurous journey through a perilous maze that puts him in jeopardy.

16. Dawn of the Planet of the Apes

Despite James Franco not returning for the sequel to the Rise of the Planet of the Apes, the movie was better than its predecessor. In a span of ten years following the worldwide epidemic of the fatal ALZ-113 virus, humanity is nearing extinction and the world is ruled by apes who have no soft corner for the species that once were on top of the food chain.

Matt Reeves returned as the director with a mission to make sure that the movie is not short of the expectations of the fans of the first film. The dedicated performance of Andy Serkis and the blend of action carried out by the primates make Dawn of the Planet of the Apes one of the most thrilling movies of the entire year.

Starring Jennifer Lawrence as the seventeen-year-old Katniss Everdeen, The Hunger Games: Mockingjay – Part 1 rocked the box office but unfortunately also became one of the very last movies of legend Phillip Seymour Hoffman; having died shortly after shooting the scenes of the film and a few of its sequel.

After Katniss, the winner of the 74th Hunger Games, crushed the yearly Hunger Games with the shot of an arrow, she formed a rebellion in order to oust the totalitarian rule of the Capitol which has held influence over the individuals in twelve Districts for as far back as 75 years; a plot that makes the film an outstanding one in terms of a war film.

Dan Gilroy seems to have a promising future when he surprised the audience with his directorial debut crime thriller film, Nightcrawler. Starring Academy Award nominee Jake Gyllenhaal, the film recounts the story of Lou Bloom, an independent moviemaker who covers the shenanigans in Los Angeles for a local news station.

When the station’s news director Nina Romina realizes the gift Bloom possesses, she encourages him to carry on his crazy occupation, only for to Bloom go hysterical as he starts to question his livelihood as his very soul slowly but violently begins to corrupt.

Hollywood A-list star Brad Pitt embodies himself as a Staff Sergeant of the United States Army in this war drama film focusing on World War II. The suspense erupts in the film from time to time particularly when a crew of mere five men battles the enemy Nazi behind enemy lines.

Despite the fact that there have been a really vast number of films based upon the devastating events of the Second World War which have highlighted the very concept of war as a necessarily good thing, director David Ayer takes a different turn by revealing how it brings out the very worst in men honored to join the army.

For a superhero movie, that too a sequel, it is a heart-stopping one. It’s a story of friendship, betrayal, and the fact that when in power, you certainly cannot trust anyone. Chris Evans returns as Captain America, the First Avenger to save the country he always put first before himself.

While trying to embrace the distant world, Steve Rogers encounters the villainous Winter Soldier only to find out that it was a blast from the past since the identity of the Soldier was none other than Bucky Barnes; Rogers’ best friend from his army days. Things become bad to worse when Rogers realizes that S.H.I.E.L.D. is no different than any government organization with a deleterious agenda.

Before the world sees how convincing enough Ben Affleck will be as the Caped Crusader in Batman v. Super-Man: Dawn of Justice, it gets a chance to see him as Nick Dunne, a reluctant husband suspected of murdering his wife after her disappearance on the day of their fifth wedding anniversary.

Based upon the novel of the same name by Gillian Flynn and directed by David Fincher, Gone Girl is an incredible piece of storytelling coupled with extraordinary performances by not only Affleck but also his co-stars Rosamund Pike, Tyler Perry, and none other than Neil Patrick Harris.

For a romantic teen comedy movie, The Fault in Our Stars might be, if not the very best, the most unique one so far. Centered on the love story of thyroid cancer patient Hazel Grace Lancaster and bone cancer patient Augustus Waters, the movie is one hell of an emotional roller coaster.

Based on the novel of the same name by John Green and directed by rookie Josh Boone, the portrayal of the leisurely strengthening bond between the two cancer-affected love birds makes the movie a very enthralling must-watch movie for teenagers and young adult audiences alike.

It is safe to say that the year 2014 has not been kind to animated movies as this one is the only one competent enough to qualify as one of the most fantastic movies of the year. While several lego movies were being released, it was DreamWorks Animation made an impact with How to Train Your Dragon 2.

Director Dean DeBlois returned to action for the sequel and picked up things from right where he left. After discovering a cave that was home to hundreds of dragons, things only got complicated as Hiccup and Toothless desperately try to maintain peace in the kingdom.