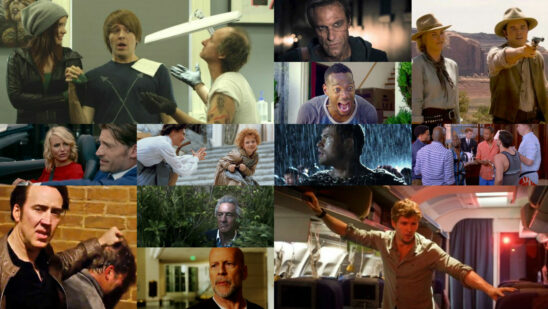 Go big or go home. That is how the saying goes and that is how Hollywood works. It is not easy to break into the business as it requires complete dedication to the art of filmmaking and those lucky enough to enter it are still not guaranteed to achieve success. The illustrious movie industry can either make you or even break you. Let’s take a look at the worst movies of 2014 that were a complete disappointment:

The year 2014 has not been very kind to actor John Cusack as he holds the “honour” of being in this article on three separate occasions. The Bag Man is as bad as its title and surprisingly, Hollywood legend Robert De Niro stars in the film as well.

The movie focuses upon Cusack’s character Jack who has a ridiculous amount of bad luck – a quality that apparently both share. After entering the world of crime by doing an unusual task requested by crime boss Dragana, the movie teases as if it is going to be a fascinating one but turns out to be a pitiful one.

The internet sensation Shane Dawson better make plans of returning to comedy videos on YouTube because apparently, Not Cool exactly lives up to its title. Directed by and starring Dawson himself, the movie was undoubtedly the worst project the internet comedian has ever worked on.

With just some punk kids from the block as stars, a budget of $800,000, and a mere twenty-day shoot, the film was another failed attempt to target teenagers from a plot of Pittsburgh juveniles partying, bonding, and experimenting in adult activities.

Las Vegas, pretty starlets, and a thrill of an adventure may be the perfect elements for a movie to earn some decent money at the box office but in terms of a decent movie, that will not work out and that goes the same for the sequel to the 2012 movie Think Like a Man.

Even though the cast from the first movie returned for a sequel, the entire flick seemed pointless and more of an attempt to make quick cash from fans of the first film. Not much of a terrible film but definitely an unwanted one due to its weak plot.

Despite having mixed reviews, the 2004 romantic drama film The Notebook was a unique art of storytelling coupled with a blend of romance. When director Nick Cassavettes announced his intentions of making another one – this one has a touch of comedy – things did not work out at all.

Partially based upon the 1996 comedy The First Wives Club, the movie is a stale one; revolving around three women who attempt to take revenge upon wealthy businessman Mark King, who cheated on all of them with each other.

14. A Million Ways to Die in the West

Seth McFarlane may have a tremendous amount of success in terms of adult comedy through his show Family Guy but the same cannot be said about his endeavors in other prospects; most notably as his awkward hosting was seen at the 85th Academy Awards ceremony.

Directing the bitterly bad film was not enough for MacFarlane as he decided to star himself in it as well despite the starring of Liam Neeson, Charlize Theron, and Neil Patrick Himself as supporting characters; ruining the spotlight for not only himself but his co-stars as well.

Even by the standards of Columbia Pictures, the movie was not only a major disappointment but also painfully unfunny. After appearing in Bad Teacher together, the duo of Jason Segel and Cameron Diaz returned for a comedy film that unfortunately failed to make an impact.

When a married couple panics after discovering that their adult tape is missing, the movie just begins to get interesting only to follow several divisions of failed comedy. The film could have been one of the funniest movies in a long but it seems like sexual comedy is not always what it is cracked up to be.

As his career began to crumble, Nicholas Cage was a man who did not realize that once a man falls in Davey Jones’ locker, there is no coming back. It is arguable if the actor of his once revered status still has not realized that as Rage is one of his worst films yet.

Directed by rookie Paco Cabezas, the movie is just another rescue story as it revolves around Paul Maguire, a reformed criminal who has no choice but to gather his men in order to find his kidnapped daughter. In short, the bad flick was just another paycheck for Nicholas Cage.

English novelist Mary Shelley may have died more than two hundred years ago but her spirit lives on in the form of literature and movies; mostly about her Gothic novel Frankenstein. It would be a shame if a film adaptation of the novel fell charge of the wrong hands and that is exactly where Stuart Beattie is.

Not even the good cast of Aaron Eckhart and Bill Nighy could save the movie from being a recipe for disaster. Seeing how Eckhart was able to pull off the menacing Two-Face from Christopher Nolan’s The Dark Knight, things could have been much smoother for I, Frankenstein but unfortunately, fate had a different plan.

This movie is hard to watch but do not let its genre fool you, since it does not pack any element of horror that makes Stiles White’s crazy movie with a crazier name that makes it hard to watch, it’s the overall movie from the beginning to the end.

Produced by the notorious Michael Bay and starring a hardly known cast, the movie was nothing more than a recipe for disaster; making it a horror film that nobody will bother to watch even on Halloween.

The Japanese supernatural film 7500 was intended to be released two years ago but was delayed not once for an amount of three times; finally releasing in this year, unfortunately. Despite having the time to make amendments, the final shot had catastrophe written all over.

Produced and distributed by CBS Films, it is safe to say that director Takashi Shimizu probably was doing a favor to the audience who were expecting some thrill from the movie as they did not suffer from boredom from seeing the film before.