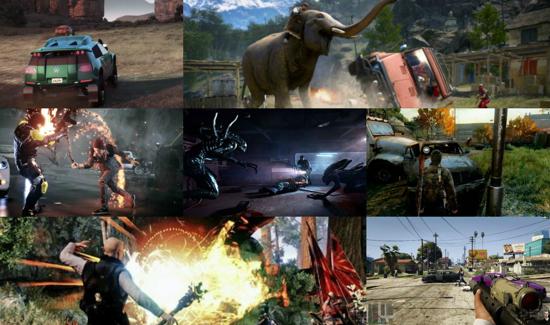 When Sony claimed PlayStation 4 as “the world’s most powerful console”, they were not exaggerating. Defeating Nintendo’s Wii U and Microsoft’s Xbox One in every aspect imaginable, PlayStation 4 stands out as the most dominant force among the eighth generation of video game consoles. As the year draws to a close, let’s take a look at the most mind-blowing and the best PlayStation 4 games of 2014:

While the much-familiar Need for Speed franchise did not release any game this year, it was The Crew that was in the mind of every gamer who lauds epic racing. Recently released and the game undoubtedly proved that it features simply the best open world in a racing game; capturing the spirit of the entire continental United States of America in the process.

Do not let the praise of its open world fool you as the player has to spend at least 45 minutes driving from one coast to another. Not only that, but the innovative single-player campaign is approximately 20 hours long; featuring many challenges and mini-games along the way.

The WWE Universe could not have been happier when WWE 2K15 was released. Published by 2K Sports and developed by Yuke’s and Visual Concepts, the game is a reflection of the very essence of professional wrestling and sports entertainment.

Above all, the video game marks the very first time featuring WCW legend Sting in a WWE-branded game.

With improved commentary, life-like superstars, impressive graphics, revamped animations, brand new MyCareer mode, the return of the Creative Suite, numerous downloadable content, and several legends from the past as playable wrestlers, WWE 2K15 is – as good old Jim Ross would have said – one hell of a slobber knocker.

Ubisoft is back with a big bang as the seventh major installment of the Assassin’s Creed series has once again won the hearts of millions of gamers who are fascinated by medieval history.

The setting of Assassin’s Creed Unity is the crucial time of the French Revolution and Napoleon Bonaparte, Marquis de Sade, and Maximillien de Robespierre, and is represented very well in the game.

Following the events of Assassin’s Creed Rogue, Arno Dorian is the main character of the game and the player has to guide him through his road to redemption which encounters the Brotherhood of Assassins and various historical events such as the Storming of the Bastille, September Massacres and the execution of Louis XVI.

The first-person shooter video game was a financial draw for developer Bungie and for a good reason too. Set in a mythic science fiction universe, Destiny combines role-playing and massively multiplayer online entities to make gamers engage in playing non-stop as if there truly is no tomorrow.

The player is able to create a unique character of their own – called the Guardian – and then has the option to choose a class and a race.

What makes Destiny so special is the degree of enigmatic abilities as the three different classes Titan, Warlock, and Hunter, and the three different races Humans, Awoken and Exo enable the player to reach new heights of fantasy adventure themes in any multiplayer-focused first-person shooter.

With FIFA World Cup 2014 serving as the main attraction in the world of sports this year, football remained the most beloved sport in several countries and video games were no exception as EA Sports rocked the PlayStation 4 platform with the release of the association football simulation game FIFA 15.

There can hardly be a gamer who hasn’t played this marvelous game who wouldn’t step into the boots of football superstars such as Lionel Messi, Christiano Ronaldo, Arjen Robben, Zlatan Ibrahimović, and many others in order to mimic what they do better than anyone else in the entire world.

Hacking can be the most intimidating asset of any man and Watch Dogs gives an opportunity to play one. Grief-stricken by the accidental death of his niece, Aiden Pearce sets out to take revenge on the people he feels responsible for and explores the fictional city of Chicago, Illinois which has been drowning in the sea of interconnectivity.

While many mainstream games use the elements of war, weaponry, and fantasy-themed adventures, Watch Dogs simply relies on minor brawls, technological gadgets to hack, low-life thugs and even demeaning slums, and it still manages to deliver a powerful punch.

9. The Last of Us: Remastered

Upon its release in 2013, developer Naughty Dog very well knew that the game was going to be really special as The Last of Us has made video game history by winning more than two hundred “Game of the Year” awards – establishing its status as the most awarded video game of all time.

When an updated version of the game was released for the PlayStation 4 console in the following year, gamers went crazy. With zombies plaguing the human world, The Last of Us is a masterpiece in terms of video game technologies and is one of the most impressive and brilliant survival horror-themed games for gamers to get their hands on.

With mass destruction, ammunition, and advanced weaponry; Call of Duty: Advanced Warfare has it all to be the year’s best strategic game. Along with an uncanny storyline to engage players in a hypnotic trance, the game is much improved compared to its predecessor Call of Duty: Modern Warfare with improved visuals and several new features (the most important being exoskeletons).

The player controls Private Jack Mitchell of the United States Marine Corps in order to make his country proud. With battles taking place in North Korea, Detroit, San Francisco, Antarctica, and even the Golden Gate Bridge, doing a job well done will not be an easy pickle for the eager private.