Home » Random » Leonardo da Vinci: The Engineer Without a Degree

Leonardo Da Vinci: The Engineer Without A Degree

Leonardo da Vinci: The engineer without a degree! Leonardo di ser Piero da Vinci was one of the most iconic figures during the Renaissance period. He was born on April 15, 1452, near Vinci, Italy to a notary and peasant woman. No one had expected that the poor family would give birth to such an intellectual artist.

“I have offended God and mankind because my work didn’t reach the quality it should have.’’ – Leonardo da Vinci

He was a writer, geologist, sculptor, architect, mathematician, cartographer, scientist, inventor, engineer, and an excellent painter. He is often credited as the greatest painter of his era, in fact, any era. His paintings of the Mona Lisa and The Last Supper are recognized as remarkable works of art in the world. Despite being regarded as a world-renowned painter, he made a great number of contributions to the vast world of engineering as well. Who would have thought Da Vinci ever dabbled in engineering?

In his early life, he was not able to receive any formal education, but that still did not stop him from learning new things. He did not miss any opportunity to learn about construction, metal-working, engineering dynamics, and mechanics. All his knowledge is based on observations and experiences in his life. 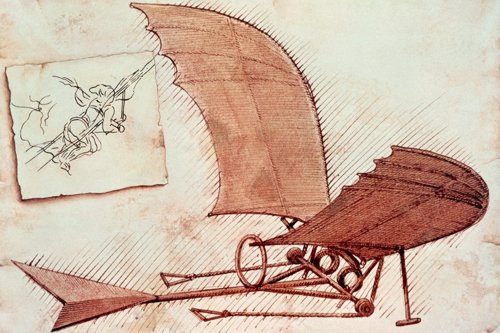 He rose to fame through his marvelous paintings but unfortunately, his discoveries and theories concerning the field of engineering were never appreciated during his lifetime. As an infant, a hawk once landed on his cradle. This was a turning point in da Vinci’s life as he began the quest to make it possible for a man to fly by the use of engineering principles. He came up with many theories but unfortunately, many of them were unsuccessful.

Initially, he constructed a large pair of wings resembling that of a bat and made his apprentice test it. The poor fellow broke his leg during the flight. After much imaginative thinking, da Vinci used an aerodynamic approach and came up with the principle incorporated in helicopters nowadays. If it were not for him, we would have been deprived of helicopters. Other than designing a helicopter, he also designed the parachute and the hang glider. 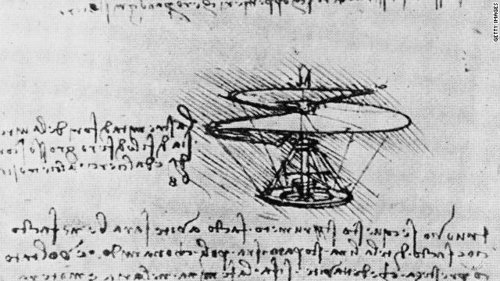 Since complex construction was quite impossible during his lifetime, da Vinci remained limited to writing ideas and drawing concepts and hypothetical machines in his journals. Da Vinci also made some contributions in the field of hydraulics and fluid mechanics. He came up with various theories to lift water from the wells and rivers. A few of his theories regarding hydraulics are currently being used in the construction and working of the Persian wheel.

In 1502, da Vinci presented a drawing of a bridge to the Ottoman Sultan, Beyazid II of Istanbul as a part of his project regarding the Turkish straits. Unfortunately, Sultan Beyazid dropped the idea as he thought it was impossible to build due to its long length of 240m. Almost 500 years later in the year 2001, da Vinci’s vision of the bridge was finally constructed in Norway.

Da Vinci was a self-taught engineer and was never afraid to take his imaginations to unreachable heights and utilize them in the field of engineering. Despite being criticized and even told that what he postulates was impossible, da Vinci never allowed criticism to interfere between him and his works. Da Vinci was destined to make a name for himself.

He was well aware of a large number of mechanical principles. With his knowledge, he was able to come up with the designs, though not entirely practical, but still very close to that of parachutes, aerofoils, airplanes (quite similar to the Wright Brother’s gliders), scuba gears, cannons, military tanks, etc. His designs and concepts are excellent examples of pure originality. It’s a great shame that many of the scientists, engineers, and inventors use his theories in their own projects and take credit for his hard work. The world of engineering would have been extremely different if Leonardo da Vinci was not born.

Multi-talented does not even come close to defining the creativity and hard work of this avid inventor. The way he utilized two entirely different fields of study and combined them to conceive new theories is far beyond imagination. His painting The Vitruvian Man is an example of how he combined Anatomy and Geometry and took them to a whole new level. As a mathematician, he worked on second and third dimension figures and various geometrical shapes and was a master in visualizing due to his high level of creativity.

The way he utilized mathematical patterns in the field of music and his marvelous paintings is truly wonderful. His curiosity and the burning desire to search for what and why opened many unexplored fields of science and engineering. He was an avid map maker and was fully capable of understanding the skills required for comprehending geology.

Quite a number of foreign media is filled with cultural references to his work. The controversial Anti-Christ book Da Vinci Code is a famous example of the references of his works and how they were wrongly utilized against a few Christianity beliefs.

Even though the majority of his works remained unappreciated during his lifetime, they were rightfully acknowledged and “put to life” almost 500 years after his death on May 2, 1519. His most famous and recognizable students include Francesco Melzi and Gian Giacomo Caprotti who made sure that his legacy never died.

Despite the fact that he did not receive any sort of formal education whatsoever, he was able to contribute so much to various kinds of fields solely due to the combination of his creativity and imagination. He was not an engineer by a degree. This just proves that it does not matter where your degree is from or even if you have it – if you dare to imagine, then you certainly can make a name for yourself.

“Study without desire spoils the memory, and it retains nothing that it takes in.’’ – Leonardo da Vinci.