30 Most Weird Ocean Creatures Ever

Animals that live beneath deep waters are some real weird creatures (with most of them being really terrifying) thanks to some still unknown evolutionary reason. With such a sheer number weird creatures and monsters roaming the oceans, we today have compiled a list of the most weird ocean creatures that could help us in determining the most bizarre ocean creature on Earth:

It is named after its hatchet-like thin and silver appearance. It completely looks like an adaptation of some horror movie predator thanks to its eyes which are prominently fixed overhead.

With flattened and long snout, claw-like teeth, and the protruding jaws this is the only specie of the 125-million years old shark family that exists even today.

Also known as “living fossils” they were discovered in the 19th century and they follow a mysterious life cycle of survival deep below the blue ocean. It is known for its super creepy predation technique which involves an angler fish mimicking its prey and then devour it completely once it gets closer.

To add more to the weirdness, when a male angler finds a female angler it quickly fuses into it – which is a unique mating habit and makes it the most bizarre creature known to man.

Found in Indo-Pacific Ocean it is also known as pop-eyed fish. It is usually half-buried with just its head above the sand and waits to ambush small fishes that swim by.

It is named after its eyes which are atop of its head positioned before its electric organ that discharges 50 volts of energy.

Native to the western Pacific Ocean, it resembles the famous animated character ‘Shrek’. It typically has unique jaws, thick and jutting lips along the overhanging chin and forehead.

This largest specie of wrasses survives on crustaceans and shellfish.

This largest specie of dragonfish has bioluminescence thanks to the photophores which mostly cover the area below its eyes and its 51 cm long body in the form of rows.

Habituated to the Pacific, Atlantic, and Indian Oceans, they are the rarely seen specie which lives in extremely deep waters (5000 meters approximately).

The blobfish is often referred to as the ugliest creature on the planet. Having a jiggly appearance blobfish is more gelatinous than your mum’s pudding.

It does not have to invest any energy in order to prey, due to the lack of muscle tissue it just opens it’s mouth and allows gravity to do its trick.

Inhabited across the world and in all depths, they have elongated cylindrical structures with anus on both sides. Due to its collagen levels, sea cucumber is incredibly flexible, lacks any sensory organs and doesn’t have a true brain.

These ocean dwellers play an important role in their local ecosystem as they recycle detritus.

Apparently named after its gigantic fan like teeth which even make the fish unable to close its jaws ever in its life.

Despite of its dreadful looks, this 7 inches long creature is benign to human beings and one of the deepest living sea creatures in the world that lives in around 5000 meters deep water.

Native to the waters of Caribbean and Atlantic Oceans, Flamingo Tongue Snails usually have a strikingly vibrant pattern which surprisingly is not a part of its own shell but instead is caused by the living mantle tissues that cover most of its body. It feeds on different types of corals.

With its transparent head, Barreleye is surely one of the world’s strangest creatures found in the deep waters of the Pacific.

Commonly known as the “Spook Fish”, it’s eyes located in front of a transparent head allow it to look straight up as it rushes. Within the socket, its eyes can rotate in all directions which allows it to look in multiple directions.

Imagine making yourself smaller or bigger with the severity of the hunger you have, this is actually what happens with the mysterious Flower Hat Jellyfish.

Habituated to the coastal waters of Argentina, Brazil, and Japan, they feed on the smaller fishes and shrink and grow according to the availability of the food supply. 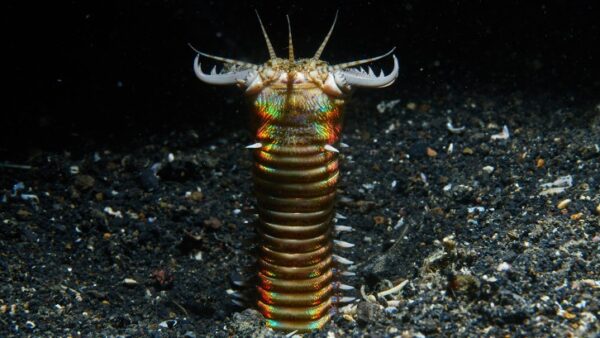 Native to the tropical waters around the world, these 10 feet long sea creatures have a long lifespan and ambush their prey with such furious speeds that it often slices them in half.

They also inject venom into their prey on the spot which makes them easier to consume. Despite their rainbowy and pretty look, they aren’t benign.

It uses its long snout as a metal detector in order to find it’s prey on the muddy seafloor. Also called as the “Ghost Shark”, it has a cartilaginous body with large pelvic fins, pectorals, two dorsal fins, thick eyes and a sharp spine.

Found at a depth of 2500 meters, they are native to various cold-water oceans.

Native to the tropical waters of the North Atlantic Ocean, Pelican Eel has an enormous mouth that is even larger than its own body – making it one of the most notable sea creatures in our list.

Named after pouch-like lower jaw its loosely-hinged mouth allows Pelican to swallow its prey that can be multiple times larger than itself.

With its large fan-like teeth, bulging eyes and photophores tipped long dorsal spine, it has a fierce nature and is found at a depth of 2800 meters in all the tropical waters around the world.

The large jaws and horrific-looking teeth help it to adapt in a low-energy environment and ensure that its prey wouldn’t escape its grip in the deep ocean where there is already a scarcity of food.

Apparently called “Flabby” due to lack of ribs, these deep blue sea creatures have small eyes and are found around a crushing depth of 3500 meters.

Found in the coastal areas of New Zealand, this colorful creature can consume a much larger prey compared to its own body thanks to its extendable stomach.

Thanks to the retractable appendage that has an inbuilt fishing rod snout, it captures its prey easily when it comes close to its unique lips.

The Red-Lipped Batfish is one of the 60 species of the batfishes that compensates the unusual look of its body by caking on the bright red lipstick. Having flattened a life on the seafloor, they look perfect while walking along the seafloor using their multi-purpose pectoral fins.

Although it has a very weird name it perfectly suits it once you start to know it. Found in the deepest waters of the Southern Pacific Ocean, it resembles the colorful autumn gourd.

It hangs out at a depth of 1760 feet and uses its tiny fins to come up. Similar to the above mentioned (#28) Anglerfish, it has a little lure on the top of its head.

Seapig is a specie of Sea Cucumber that is found at a depth of approximately 1000 meters in Indian, Pacific, Atlantic, and the Southern Antarctic Ocean.

They are often distinguishable thanks to their short legs which are attached to the dorsal parts of their tiny bodies. They usually stay together in large groups that typically consists of 300 to 600 members.

Also known as the “Great Swallower”, it is named after its ability to devour fishes that are 10 times larger than its own size. They are found in the subtropical and tropical waters worldwide.

Recently found in the depths of the Western Pacific Ocean, they have flat bodies that resemble flounders but are a little bit longer than them. Both of their tiny eyes are located on the left side of their bodies.

Astonishingly they live in the extreme hostile environments found around hydrothermal vents that are usually rich in sulfur.

The candelabra-shaped coral is one of the most unique underwater creatures on our list. They have a foolproof way to prey as they capture small ocean creatures with the help of their hooks and spread their membranes all over them. Usually habituated between 3000-7000 meters below the surface, Dumbo Octopus is similar to the regular octopus except for its ear-like flaps on both sides of its rather cute bell-shaped head.

They are never exposed to sunlight and they feed on the crustaceans, snails, and the bivalves’ available at the seabed. So far this is the deepest-dwelling octopus specie known to Science.

Its name says it all as it is a shark specie with a really gigantic mouth. With overhanging jaws and bulbous head, it’s native to the Indian, Atlantic, and Pacific Oceans.

The base of its throat consists of triangular marks and the tips of its fins have characteristic white spots. With a total length of roughly 4.5 meters, a Megamouth on average weighs a whopping 1653 pounds.

Black Dragon females have a distinct long chin whisker and have fanlike teeth, however males lack both the chin and the teeth. These tiny creatures don’t have a stomach and their entire life cycle revolves around mating.

Native to the tropical and the subtropical waters of the Pacific, Indian, and Atlantic Oceans, they have an extremely interesting lifestyle.

Found in the Red Sea and the Indo-West Pacific Ocean they are approximately 3 cm long in length. They have bulging eyes, thick lips, and white patches covering their entire bodies.

Interestingly the male Jawfishes depict mouthbrooding behavior and keep their unhatched eggs in their mouths until they hatch.

Commonly known as Architeuthis dux, it is the world’s largest known invertebrate having a confirmed length of 43 feet (with some unconfirmed specimens measuring 66 feet).

When it was first founded in the Pacific Ocean in 2007, a new genus was created. Although it is a small animal however one of its claws can be equal to its entire body length.

Both of its claws are different in size and have sharp teeth which it uses effectively to grasp its prey.

Which of the above is the most strange-looking sea creature that you have seen yet? Share with us your thoughts in the comments section below!