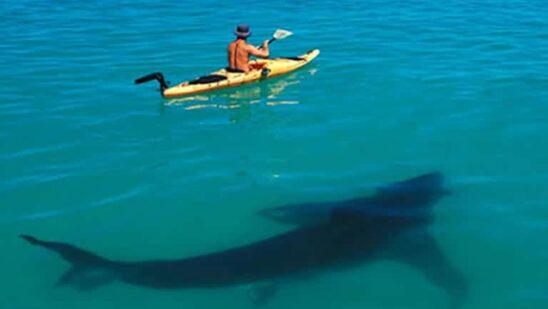 Sharks, with their highly developed senses and teeth, make them the top predators of the seas. Sharks occasionally injure or kill a person, this is an extremely rare occurrence, especially considering the millions of people who wade or swim in the world’s oceans each year. According to statistics collected by the International Shark Attack File, far fewer than 100 people worldwide are bitten by sharks each year, and only a handful of these attacks prove fatal. It is also known that sharks rarely attack humans, but it does happen, and mostly it’s because sharks mistakenly consider a person for a seal, a sea lion, or one of its usual prey animals. We have compiled a list of the top ten most dangerous sharks out there on the seas. 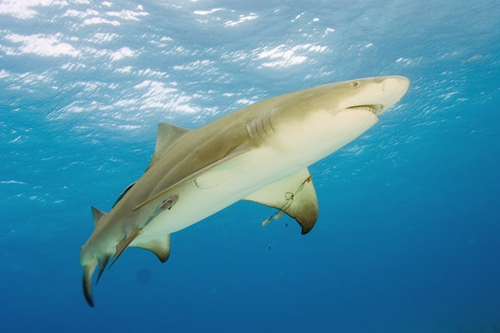 The Lemon Shark is a shark in the family Carcharhinidae, that can grow up to a length of 10 feet (3.0 m). It is known as the lemon shark because, at certain depths, light interacting with the local seawater can give this shark a tanned and yellow pitted appearance, much like the surface of a lemon. 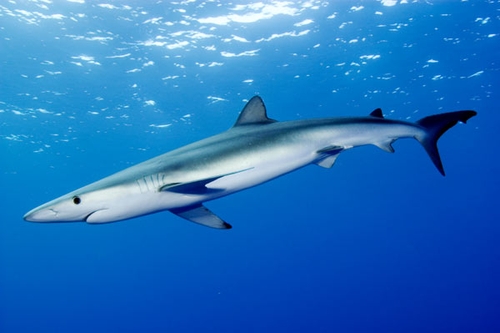 The Blue Shark is a species of requiem shark and belongs to the family of Carcharhinidae. It is found in deep waters in the world’s temperate and tropical oceans. Blue sharks migrate long distances, for example from New England to South America as they prefer cooler waters.

Although generally lethargic, they can move very quickly. They feed primarily on small fish and squid, although they can take larger prey. Blue sharks are often school segregated by sex and size, and this behavior has led to their nickname “wolves of the sea”. 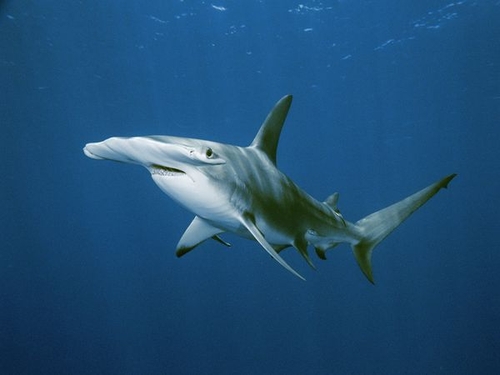 The Hammerhead Sharks are a group of sharks belonging to the family of Sphyrnidae. They are named for the unusual and distinctive structure of their heads, which are flattened and laterally extended into a “hammer” shape called a “cephalofoil”.

Hammerheads are found worldwide in warmer waters along coastlines and continental shelves. Unlike most sharks, hammerheads usually swim in groups. Some of these groups can be found near Malpelo Island in Colombia, Cocos Island in Costa Rica, and Molokai Island in Hawai’i. 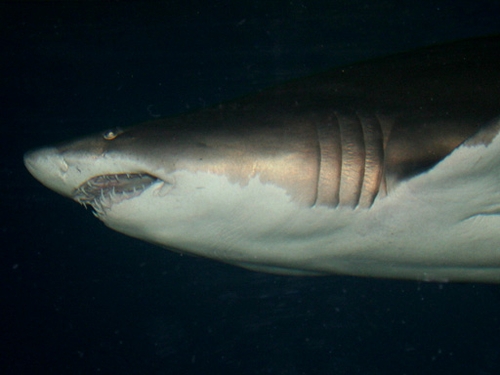 Sand sharks, also known as Sand Tiger Sharks or ragged-tooth sharks, are lamniform sharks of the family Odontaspididae. They are found worldwide in temperate and tropical waters, including on both sides of the Atlantic coast, but most notably in the Western Indian Ocean and in the Gulf of Maine.

Sand sharks are the only shark known to surface for gulps of air. They store the air in their stomachs which allows them to float motionless in the water as they hunt for prey. 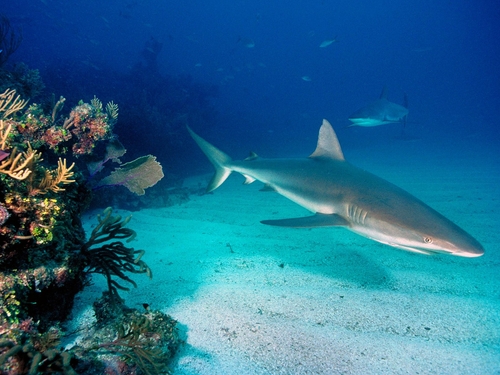 The Grey Reef Shark is a species of requiem shark and belongs to the family of Carcharhinidae. It is one of the most common reef sharks in the Indo-Pacific and is found as far east as Easter Island and as far west as South Africa. This species is most often seen in shallow water near the drop-offs of coral reefs.

The grey reef shark has the typical “reef shark” shape, with a broad, round snout and large eyes. This species can be distinguished from similar species by the plain or white-tipped first dorsal fin, the dark tips on the other fins, the broad black rear margin on the tail fin, and the lack of a ridge between the dorsal fins. Most of them are less than 6.2 feet long. 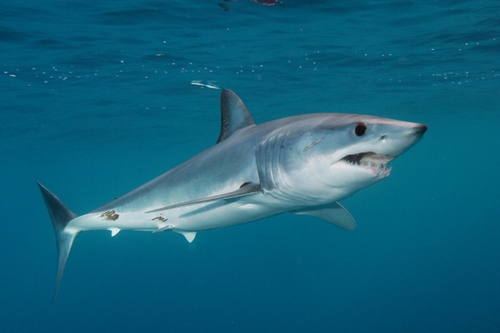 The Shortfin Mako Shark is a large mackerel shark. It is commonly referred to as a “mako shark”. It is a pelagic species that can be found from the surface down to depths of 150 meters, normally far from land though occasionally closer to shore, around islands, or inlets.

It is seldom found in waters colder than 16 °C. 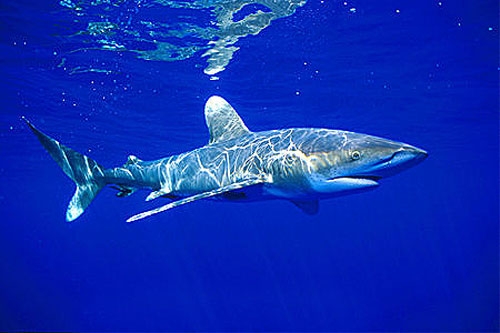 The Oceanic Whitetip Shark is a large pelagic shark inhabiting tropical and warm temperate seas. Its stocky body is most notable for its long, white-tipped, rounded fins. This aggressive but slow-moving fish dominates feeding frenzies and is a danger to shipwreck or air crash survivors. 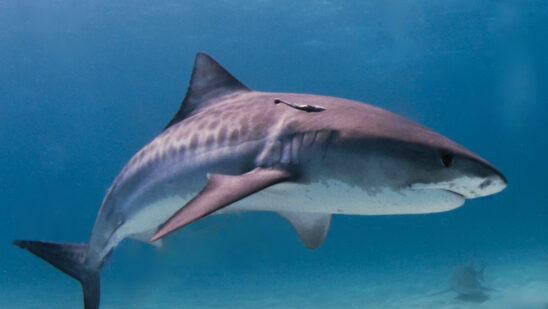 The Tiger Shark, also known as Galeocerdo cuvier, is a species of requiem shark. Commonly known as sea tigers, tiger sharks are relatively large macro-predators, capable of attaining a length of over 5 m (16 ft). It is found in many tropical and temperate waters and is especially common around the central Pacific islands.

Its name derives from the dark stripes down its body, which resemble a tiger’s pattern and fade as the shark matures. The tiger shark is a solitary, mostly night-time hunter. While the tiger shark is considered to be one of the sharks most dangerous to humans, the attack rate is surprisingly low according to researchers.  They often visit shallow reefs, harbors, and canals, creating the potential for an encounter with humans. 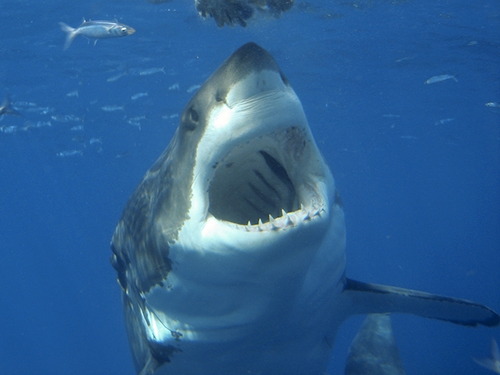 The Great White Shark, also known as the great white, white pointer, white shark, or white death, is a large lamniform shark found in coastal surface waters in all major oceans. The great white shark is known for its size, with the largest individuals known to have approached or exceeded 6 meters in length, and 2,268 kilograms (5,000 lb) in weight. This shark reaches maturity at around 15 years of age and can have a life span of over 30 years.

The great white shark is arguably the world’s largest known extant macro-predatory fish and is one of the primary predators of marine mammals. It is also known to prey upon a variety of other marine animals and is on the list of a number of recorded attacks on humans. Due to the monstrous portrayal of the great white sharks in Hollywood shark films, this kind of shark is feared the most by people worldwide. 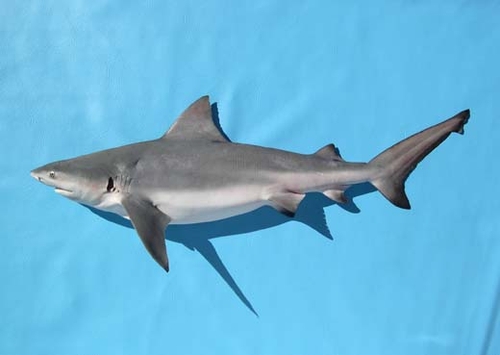 The Bull Shark, also known as Zambezi shark or unofficially known as Zambi in Africa and Nicaragua shark in Nicaragua, is a shark common worldwide in warm, shallow waters along coasts and in rivers. The bull shark is well known for its unpredictable, often aggressive behavior. The Bull shark is most famous for its remarkable ability to thrive in both saltwater and freshwater and can travel far up rivers.

They have even been known to travel as far up as Indiana on the Ohio River and Illinois on the Mississippi River. As a result, they are probably responsible for the majority of near-shore shark attacks.

Did you like our list of the most dangerous sharks in the world? Let us know in the comments below!