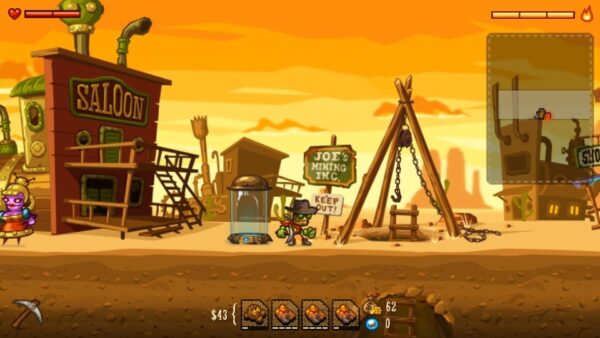 With the rise of new development tools, indie games are now more common than ever. While these games may not have the finesse of AAA games or video game publisher support, what they do have is innovation. Since these small-team creators don’t have to rake in big money, they are free to experiment and often create unique gameplay. They are also quite cheap in comparison to mainstream titles. Since we saw so many of them released in the last year, we’ve compiled a list of the best indie games of 2013 to present to you the finest ones:

Although 2013 saw the release of several puzzle games, Sokobond easily outclasses most of them. Each puzzle challenges players to create a molecular compound by assembling all the atoms present on the screen in a specific way.

As more levels are unlocked new mechanics are introduced, such as the ability to split atoms or rotate pairs. Even if you aren’t a chemistry major, this game will surely take a few hours away from your life.

140 is a short indie game that masterfully demonstrates how music and a gaming platform can be elegantly fused to create a wonderful experience. 140 has musical elements presented on-screen and timing movements to the music is the only way to move forward.

The platforming challenge itself is very fulfilling, and the superb music does nothing but add to the atmosphere. The boss battles at the end of each level help bring twists to the gameplay in unique and fun ways.

This game casts players as prospecting robots in an alternate version of the Wild West. You start out with nothing but a plot of land and a pickaxe, but there is a vast underground world to mine. While initially, all you will want to do is upgrade your equipment, the game’s joy comes from discovery and the tension between risk and reward as you dig deeper and deeper into the earth.

The game has a solid presentation style and it controls very responsively, making it a treat to play.

Stick it to the Man plays like a combination game of Psychonauts, Monkey Island, and Tearaway. While this alone should be able to justify its position in the list, this indie title is a puzzle game where the main character has the unique power of listening to other people’s thoughts and materializing items out of them in the real world.

This mechanic is then used to solve a wide variety of quirky puzzles. Add to that mixture a heap of comedic writing and you have yourself an amazing indie game.

Surgeon Simulator 2013 is one of the funniest games of the year. The gameplay is exactly what the title says, except in the most ironic way imaginable. Learning how to perform each operation is a trial and error affair, and the physics engine does nothing but laugh at your every move.

It escalates quite beautifully too, asking players to perform surgery in a hospital, in the back of a moving ambulance, and then eventually in space.

Guacamelee! is a Metroid and Castlevania-styled action game that is incredibly fun, fast-paced, and incredibly goofy. This game has you using rolls, dashes, uppercuts, and other combat moves to actually progress through the world.

Combine that with the ability to switch between the land of the living and the land of the dead, cool visual design, a great sense of humor, and a bunch of pop culture references and you’ve got one amazing game.

Although survival horror has lost much of its sheen in recent years, in the hands of a small independent developer Red Barrels, it has quickly regained all fame. Outlast is easily one of the year’s spookiest experiences. The game is set in survival horror nirvana; an out-of-control mental asylum.

You play as an investigative journalist who journeys into the aforementioned asylum armed with only a camcorder. What awaits is nightmare fuel for many, many nights to come.

Antechamber is a first-person puzzle game that is presented in an awfully appealingly minimalist manner. The indie game uniquely plays with expectations and perception and ignores many of the more traditional video game frameworks.

It breaks all the normal rules of logic while simultaneously showing you its own, forcing you to think and experiment with its crazy puzzles. If you want an experience that will surprise you, you should definitely check this out.

Proteus is a short indie game. It’s so short, for most people it won’t last more than a half hour. Yet, it is probably nothing like you’ve ever played before. Saying play itself might be stretching it.

This indie game is an experiment in video game form; you are found on an artsy pixelated island, you are given no direction, and you are left on your own. The game tempts you to discover how things unfold for yourself, and we too don’t want to ruin that experience by revealing anything about it.

In Rogue Legacy, death is permanent. However, Progression doesn’t just reset with the death of your character. The game in fact adds a compelling layer to this challenging action platformer indie game. Each time you die, a new generation of heroes is born; each with interesting and new traits.

While many of the new heroes will feature useful abilities, there are some that will not (such as a hero with bad eyesight causing the screen to become fuzzy). The fun of this title lies in your gradual, constant progress as you grow stronger (or weaker) with each new generation of characters.

Papers, Please is a game that lets you play as a low-level border-crossing customs official. The gameplay involves having to examine various pieces of paperwork. While that may sound boring, Papers, Please turns up the dial every now and then to turn the dull act of determining the veracity of documents into a tension-filled, emotional experience.

There are few sounds that are as stressful as the sound of Papers, Please’s in-game dot matrix printer spitting out another infraction notice for a mistake made, especially when that mistake just costs you the credits needed to buy medicine for your dying son. This indie game is one of 2013’s most unique game experiences.

Gone Home is a genre-defining game that really allows you to experience the intricate, moving stories of what seems to be a real family.

Despite being an indie game, Gone home really combines great artistic style, storytelling, and gameplay to give you a game that is one of the best Story-driven games of the year, packed with the emotional weight and authenticity that only a handful of games possess.

The Stanley Parable is a game that starts you off at the desk of an ordinary office worker doing what he’s told, mocking modern video games.  As such, the game is about the type of choices you make in various video games, or rather, the lack of choices you have.  He finds one day that his computer is no longer telling him what to do and that his co-workers have mysteriously disappeared.

So he sets out to investigate, thus leading you on a journey of your choosing, with a hilarious narrator that TRIES to narrate your every move. The game is an amazing blend of innovation, surprise, and humor.

Which of the above-mentioned best indie games of 2013 have you played? Is there any other indie game that should have been on this list? Feel free to comment below!