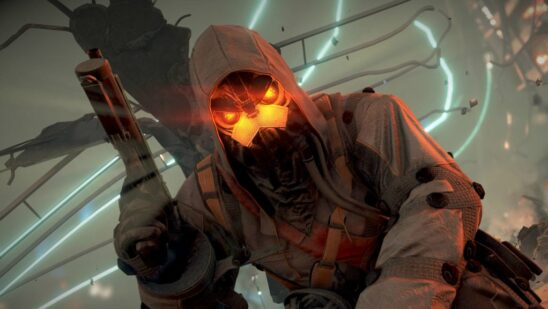 The famous first-person shooter series, Killzone will make its way toward the PlayStation 4 as a launch title (bundled with it in some countries). The 4th console entry will include gameplay additions such as tiny drones and protective shields. With the help of the PS4’s bleeding-edge technology, the combat will be notably faster and the visuals will be stunningly beautiful.

Embedded below is a gameplay trailer of the game which was shown back at E3:

Another series that had its roots in the PlayStation, InFAMOUS Second Son is the 3rd game in the series and an exclusive to the PS 4. Set 7 years after Infamous 2 the game follows a new protagonist, Delsin Rowe, using the game’s unique conduit powers to rebel against the oppressive 1984-styled government that controls the city.

The city looks spectacular with the famous Space Needle dominating the skyline. The mighty processing power of the PS 4 allows a huge game world that makes even Empire City and New Marais look like towns in comparison.

Have a look at the official E3 gameplay of Infamous Second Son:

The Order 1886 is developed by Ready at Dawn and Santa Monica Studios and is set in an alternative historical version of the Victorian era of London. A universe where the progress of the Industrial Revolution has been fueled by an ancient war against a powerful, inhuman enemy.

The game follows a male and female duo armed with steampunk-inspired weaponry fighting for mankind’s survival by blasting waves of supernatural enemies with backgrounds of shady zeppelins, monorails, and skyscrapers being seen.

This game promises players the chance to travel to real locations and meet actual historical figures who will help them in their quest. Let us hold our breaths in anticipation of seeing Queen Victoria herself at Buckingham Palace:

This upcoming game has mankind under threat from an army of invading goblins, so a mysterious scientist known only as the Doctor binds together ancient relics he was studying to create Knack, the main character. Knack will have the ability to absorb materials such as ice and metal into his body, causing him to grow stronger.

The gameplay will be a mixture of the Katamari series and the Crash series along with a dash of God of War. You can be sure there will be plenty of humor involved as the game is developed by LocoRoco, who are known for their comedic video games. Have a look at the gameplay of Knack:

Drive Club will be an online next-gen racing game that will incorporate real-time and asynchronously competitive racing for people across the globe. After getting into the game, a companion app will provide you with a 24/7 link to the game, allowing you to create challenges and huge tournaments.

As if that isn’t cool enough, the game will be visually insane with cars created right down to the individual fibers as well as reflections in the headlight bulbs.

6. Everybody’s Gone to the Rapture

An upcoming first-person adventure video game, Everybody’s Gone to the Rapture is a spiritual successor to Dear Esther. It will be set in a large open world and will have a story-heavy plot. Although initially announced for Microsoft Windows, the game will now be a PlayStation 4 exclusive.

The story will follow 6 characters and their journey toward the apocalypse. This game will also be available on day one of the PS 4 launch.

So far only a teaser trailer has been released for this game:

This game will be available for free as part of the first Instant Game Collection title for PlayStation Plus members in North America. Have a look at the action-packed gameplay of Resogun:

8. Shadow of the Beast

Shadow of the Beast is a reboot of the classic 1989 side-scrolling platform video game. Not much has been made public to date about this reboot aside from the fact that it will be re-created as a melee-focused, action video game. The plot somewhat follows the original as it stars a bipedal monster wielding weapons and fighting demonic forces.

CEO of Heavy Spectrum, the developer, wrote that they will try to create a magnificent world that will give players the opportunity to try and piece together what is happening around them.

Embedded below is a reveal trailer of Shadow of the Beast shown at E3:

Developed by Capcom, Deep Down is an upcoming Fantasy online role-playing title that will be a PS 4 exclusive. The game will be free to play and will offer players the ability to play as a character who lives in New York City during the year 2094.

The gameplay will focus around magical artifacts that, when touched, will transport the player into the past to explore dungeons and to avoid or battle monsters in order to hunt treasure.

The Playroom will use sophisticated augmented reality techniques to immerse the players and as per the developers, new free downloadable content will also be released in the future.

What titles are you planning to get your hands on from our list of Sony PS4 exclusives above? Let us know in the comments section below!