Hammerhead Shark – The Unique Shark That Sees In Stereo Vision 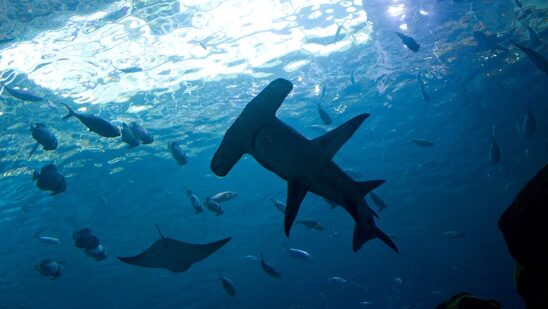 Hammerhead sharks are possibly the most threatening looking of all the shark species. They are indeed well-named ‘hammerheads’ and their extraordinary features render them eerie looking and almost prehistoric. Of all the dangerous sharks, Hammerheads’ eyesight probably renders them the better hunters, according to scientific research conducted comparing them with other shark species. The tests were conducted by shining a low level of light in the creatures’ eyes and measuring the resulting electrical activity.

The eyes of hammerhead sharks are widely spaced and placed on either side of their heads. Scientific research has shown that it gives them the advantage of being able to see in stereo vision. But, what does this mean exactly?

Well, these scary-looking creatures are much better at tracking down fast-moving potential food because they see ‘depth’ more clearly and have a wider field of view. Some creatures belonging to their food sources – like squid – dart about in all directions to avoid capture and with their 3D eyesight, a hammerhead shark is much better equipped to catch them. This shark can judge much more accurately how far away its food is and when to strike.

Hammerheads have binoculars and a much broader 3D vision than any other shark species. But what is binocular vision, you must be wondering right? It is the vision formed when the vision fields of two eyes overlap, which permits a more accurate panoramic view and assessment of distance and depth. Much as a pair of binoculars or field glasses work.

However, there is also a downside to this vision as hammerhead sharks have a larger blind spot directly in front of them. They may have better peripheral vision, but studies show small fish swimming in the space between their eyes remain unperceived – almost as though the fish know they are safe there.

In addition to having stereo eyesight, the hammerhead shark’s skull design is thought to give it other predatory advantages.  Its sense of smell could be more intense due to the greater distance between its nostrils. The head shape is more ergonomic to improve swimming and movement through the water.

The eerie aspect of the hammerhead shark makes it very feared although it is reportedly a very shy creature. It should also be remembered that shark attacks are extremely rare and your chances of becoming a victim are very low (about 1 in 6 million in the United States).