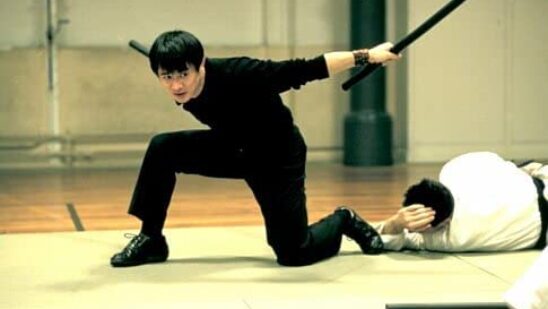 Fistfights in movies fall into two main categories – they’re one-on-one scenes, favored by boxers, and then there’s the ‘one guy against many’ fights that really give the heroes a chance to show how skillful they are. Here are the best fist-fight scenes in cinema history:

Jet Li – Kiss of the Dragon

One great example of this is in Kiss of the Dragon. Jet Li fights his way through a building to get to ‘The Boss’, and uses his superior thinking and nimble way of fighting to defeat a whole horde of opponents. From his initial assault on a security guard, who is dispatched with one swift kick to the face, Li then takes on an entire class of martial arts students. Singly, in pairs, and latterly in larger groups, they attack him from all sides, but Li is never overpowered.

Utilizing equipment in the room, but mainly using his own fists and feet, no group of fighters is a match for his prowess. Leaving a room full of groaning invalids behind him, he moves on to fight a guy nearly twice his size, who at first seems to be unbeatable. No matter how many times he is knocked down, he always gets back up and just keeps on coming.

After several minutes of spectacular fighting, however, Jet Li gets him on his knees and delivers a fatal kick to the head, snapping his neck in the process.

The Matrix: Reloaded uses the same ‘one on many’ techniques as Neo (portrayed by Keanu Reeves) fights off an army of ‘Agent Smiths’, but utilizes modern techniques to dramatize the fighter’s skills. Neo can fly, stop bullets with the power of his mind, and virtually disappear, only to reappear close by and deliver the final blow.

As more and more agents pour into the deserted street and the rain batters them all from above, Neo is still indestructible.

No matter what the agents throw at him, his leaps, kicks, and punches seem to come from nowhere, and he dispatches hundreds of agents in a matter of minutes, all the while conserving enough energy to go on and fight the original Agent Smith.

For one on one fights, though, Raging Bull deserves a mention. The sheer brutality of the boxing scenes in this film takes one’s breath away. Towards the beginning of Jake la Motta’s career, we see him as the undefeated champion of the ring.

In his fight against Janiro, his opponent is beaten down in less than one minute, as la Motta pounds unmercifully at his face, spilling blood, sweat, and tears across the ring before Janiro finally sinks to the ground, broken and overcome.

Finally, how could we forget Rocky? There is no need to choose a favorite scene, as all the Rocky movies show fist-fighting at their best.

No CGI, no special effects, just some good, honest punch-ups throughout – many of the latest movies have tried to emulate it, and one day maybe some will, but for now, Rocky remains the classic example.

What are your favorite fist-fight movie scenes? Let us know in the comments below!