Spectacular Car Crashes From The Movies 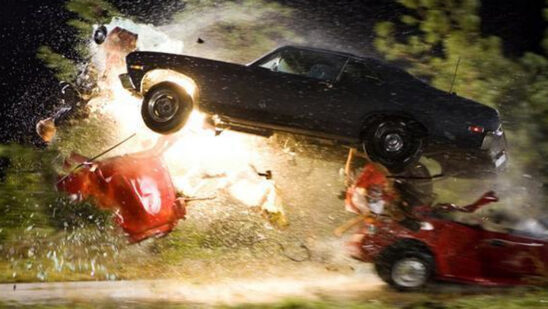 Car crashes are a classic recipe for raising the adrenaline level of cinema viewers. As we know, car crashes can happen in real life too, but in these instances, we can’t expect Arnold Schwarzenegger to come to our rescue. We’ll leave the actors to Hollywood. Movie makers from around the world have quite effectively cashed in the formula of car crashes for decades and continue to do so even today with millions and millions of dollars being spilled dedicatedly over the creation of some memorable car crashes in the movies. It is not uncommon now to even have entire movies based on or around the destruction of cars. Listed here are some of the most spectacular car crashes from the movies:

Though technically not a car, everyone always raves about Luke Skywalker blowing up the Death Star; but no one ever talks about the foot soldiers of the Alliance, or in this case, the X-wing fighter pilots. While Luke was doing his hair and preparing for his final run on the Death Star, his rotund fellow pilot Porkins was doing the donkey work.

He drew the Imperial fighter’s fire and returned the favor with considerable skill, blowing many of them straight out of the sky, until his luck finally ran out.

A gun tower hit the X-wing fighter (probably because he wasn’t going as fast as the others due to ‘ballast’ issues) and Porkins went down like this:

Thank you and goodnight.

The opening scene of the classic Italian Job is that of the unfortunate Roger Beckermann driving through the Italian Alps at the wheel of a Lamborghini Miura to the sound of Matt Monroe’s ‘Days like these’. Stylish and cool, the scene depicts the car negotiating the steep mountain roads, effortlessly handled by the powerful Lambo.

Unfortunately, Beckermann’s leisurely drive is cut horribly short as he enters a tunnel, crashes, and explodes in a fireball. The remains of the car are removed from the tunnel by a bulldozer and dumped over the side of the mountain road.

When it comes to car smashes, Mad Max is stuffed full of them and there are too many to mention in detail here. The premise is simple: Mel Gibson is ripping up the highway seeking revenge for his murdered family.

The movie features numerous spectacular car crashes and wipeouts in the Aussie countryside. The film crew’s car insurance premiums must have been huge.

Sylvester Stallone’s unintentionally hilarious motorsport extravaganza, Driven, saw one of the most extravagant movie crashes of all time. Drivers Jimmy Bly and Memo Moreno collide while contesting the lead for an Indycar race, resulting in maybe the most unbelievable crash in motion picture history.

After colliding, one car is thrown against the track barrier, then bounces back into the pack of approaching cars (in slow motion, of course) and is clipped by one of them. The vehicle then swaps ends several times before flying over the track (yes, we know, we’ve left the real world now), bursts into flames as it hits a tree, and lands in a lake.

Not convinced? Have a look:

Nothing can even come close to what the 2007 double feature Grindhouse showed to the audience. The high-speed head-on collision between the ‘death proof car’ and the other car (full of girls) is arguably the most brilliantly choreographed car crash scene in cinematic history.

The collision between the vehicles results in all three girls being killed with their body parts scattered all around the place. Although extremely graphic, the scene still is one of the best movie cars crashes ever.