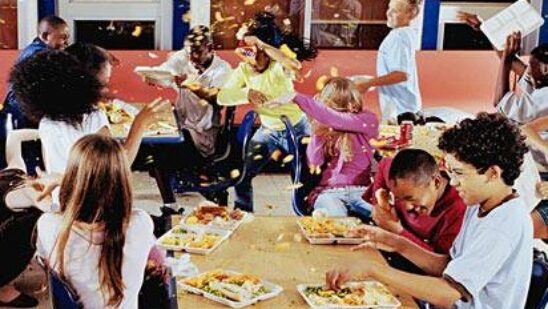 Most people think that food is just to stop you from dying of starvation and, while it’s pretty important, there are so many other uses for our delicious food. People use it for art-making, constructing houses, and even powering cars. But there is another, even nobler use: food fighting. When arguments erupt, sometimes the best way to sort the problem out is to fling food at each other’s faces – noble wisdom filmmakers have been aware of for years, which is why we now present the 5 greatest food fights in movies:

An animated film made by Disney in which the food fight forgoes the classics of custard pies, using meatballs instead.

Done in the style of a kung-fu film complete with bad dubbing and a grainy filter, this is quite possibly the only food fight where people have used martial arts to kick food at each other.

You’d expect all the fights in a film set in the Old West to be fought with guns, not pies. Yet by the time the entire cast has crashed through Warner Bros studio and onto another film set, it’s clear that all bets are off.

The ensuing food fight is as anarchic as you can get: with cowboys, cavemen, chefs, and even Hitler flinging pies at each other.

A musical about a 1920s gangster played by children, Bugsy Malone is a strange film. The characters all carry around Tommy guns but these guns fire miniature pies, turning every fight into a food fight. But the best comes near the end when everyone drops their guns and resorts to the old-fashioned way of hurling full-sized pies at each other.

It’s a scene of childhood whimsy, up until you realize that in their universe they’re essentially throwing grenades at each other. Not such a heart-warming scene now, is it?

This scene may have well caused an outbreak of food brawls in schools everywhere. Bet the filmmakers didn’t consider that, did they?

One of the most famous lines from this American comedy about college students is Bluto, played by John Belushi, shouting “food fight!” at the top of his voice.

At his call, the school cafeteria is turned into a crossfire of spaghetti and mashed potato. The only one who escapes unscathed is Bluto himself, who runs off to cause more carnage.

Set in the early 1900s, this slapstick comedy has the two great daredevils of the age attempting to prove who is the greater man by driving across the world. When their adventures bring them to a huge kitchen filled with pies and cakes, there’s only one way to resolve things: a food fight. Besides, this wasn’t your run-of-the-mill pie fight – it used up to 4000 pies that cost over $18,000 and took five days to film.

The food brawl was so intense that the actors were even often knocked out after being hit in the face with too many pies. With that sort of dedication, The Great Race has to win the top spot.

As you can see, food fights in movies are quite ubiquitous, from past to present, from New York to London, bringing fun wherever they appear. In fact, it is scientifically proven that the only people who don’t enjoy them are the cleaners left to mop up the leftovers long after the director has wandered off to polish his Oscar shelf. So next time you watch a food film, in-between chuckling as someone takes a carrot to the eye, spare a thought for those brave souls whose services make all the tossed pies possible. Can you recall any other memorable food fights in movies after going through our list? Let us know in the comments section below!