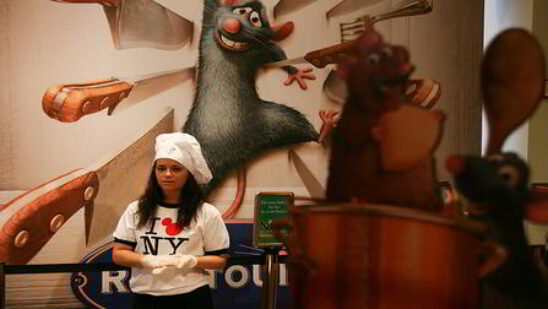 When it comes to enjoying food-related movies, these are the top five entertaining movies that come to mind where food is a main topic in the plotline:

This movie is about opening up a chocolate shop, the actress Juliette Binoche plays a drifter who has a young daughter. They both set up this chocolate shop in a French town in 1960.

The townspeople love her chocolate, all but the mayor, who is rather evil and puts together a boycott to get people to stop buying her treats.

This is a cute cartoon about a rat who wants to become a famous French chef. It won an Oscar for the best-animated film. In the story, the rat helps a real French cook to learn to be a chef too.

The two go through a series of misadventures all for the love of food and the love of a woman too (for the human chef).

This strange and funny food-centric flick is about Japanese noodles and is a sort of noodle western. The main theme is a cook who is trying to learn how to create the world’s best noodles. A trucker and drifter who is somewhat like Clint Eastwood helps him along the way.

It’s a great movie that revolves around food, especially noodles, and how the characters love what they are doing.

This food movie is about the real story of Julie Powell, a blogger, whose goal is to cook all of the dishes in the great legend of all chefs, Julia Child’s cookbook “Mastering the Art of French Cooking”. The role is played by Amy Adams.

The plotline is based on both women following their own dreams. Julia Child is played by actress Meryl Streep. The basics of the film are to live your life, follow your dreams, and don’t worry about being perfect.

This great food-related flick is one that goes into detail about how to create that extra special feast of all feasts. In the film, two brothers are fighting and trying to run an Italian restaurant that is not doing very well. The brothers are played by Stanley Tucci and Tony Shalhoub.

The two are trying to figure out why the restaurant that is across the street does so well and their Italian one does so poorly. To try to drum up business, they figure out a plan to get the celebrity, Louis Prima to come to their restaurant and serve up a fantastic feast that they believe will make their restaurant famous. The movie does a great job showing how they plan and cook this feast and therefore secures a top place in our list of best food-related films.

What are your favorite food related movies? Let us know in the comments below!