Home » TV » What ‘The Walking Dead’ Taught Us About Zombies

What ‘The Walking Dead’ Taught Us About Zombies 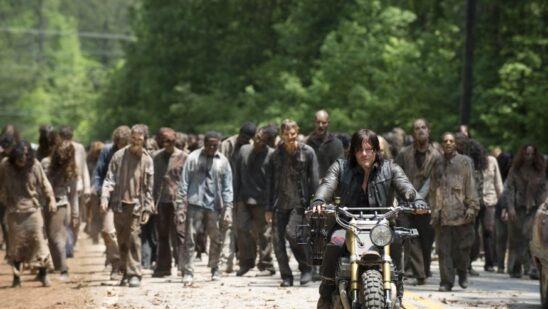 Zombies are the new entertainment craze. People are obsessed with zombies, and some have even gone as far as preparing for a zombie apocalypse. While there are zombie believers and zombie naysayers, shows like AMC’s The Walking Dead has taught us a thing or two about zombies and what to do if we ever find ourselves in a world of “walkers”:

5. The Disease is Airborne

Most people think that you have to be bitten by a zombie in order to become one, but “The Walking Dead” has taught us otherwise. We learned that the disease is actually airborne and everyone is infected. Because of this, you don’t turn into a zombie by being bitten by one—you turn into a zombie simply by dying.

Whether or not you believe in zombies is up to you. Maybe you think they’re real and you’re waiting for the zombie apocalypse to occur. Or maybe you just like them for entertainment purposes. Either way, “The Walking Dead” has taught us plenty about zombies, so if an apocalypse does occur, try to stick with these facts when fighting off “walkers”.

When hungry zombie sees a potential meal, they will do anything in order to get a bite. You can’t trap yourself in a closet and hope that they’ll go away. As long as the zombie thinks that you’re there, they will continue to push and claw at the door until their physical strength breaks it down and you become their dinner.

For this reason, if a zombie apocalypse ever happens, it is smart to always work in pairs. This way, both of you can look out for each other and protect each other from imminent death.

3. More Than One Will Eat You

If you are attacked by a zombie, you can guarantee that another one will follow closely behind to take a bite out of you too. Zombies love the blood of a recently deceased individual, so numerous zombies will eat one person just to get a taste.

Zombies will go where the noise is. If you are by a loud factory, you are probably surrounded by zombies. This is why it is smart to kill zombies with a quieter method than using a gun, as the noise of the shot will attract other zombies to the area.

If a zombie apocalypse does occur, you will be safest in the quieter, remote areas, like Hershel’s farm.

1. Shoot them in the Head

A zombie is already dead, and people make the mistake of thinking that they can shoot them anywhere and kill them again. This is wrong. If you really want to kill a zombie, you have to take out their head.

You can use a good gun, a bow and arrow, a dart, a sledgehammer—whatever will pierce their brain is the only way you will effectively kill a zombie.

Do you have something to add to our list of the lessons The Walking Dead taught us about zombies? Sound off in the comments below!