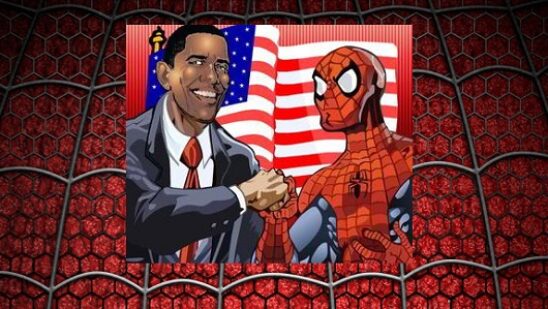 The history of comic books dates back to ancient times when illustrated manuscripts served as tales for the upcoming generations. Modifying the art of such inscriptions and making them a worldwide iconography, gave birth to comic books. To further extend the worth of the eye-catching strips, creative writers began to include celebrities in the storylines of the most cherished comic book characters and superheroes. The following are fifteen of the most astounding celebrity cameos in comics: 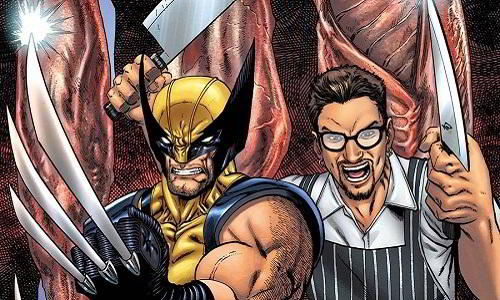 People who believe that the MasterChef television series cannot be topped might want to reconsider once they find out that the hottest piece of culinary action occurred in one of the X-Men comic books of Marvel Comics.

When James Howlett aka Wolverine meets a host of Chef vs. City, The Next Iron Chef contestant, and avid X-Men fan Chris Cosentino, they realize they have more in common than using mere razor sharped blades. As surprising as it may sound, the duo made a pretty good team as well. 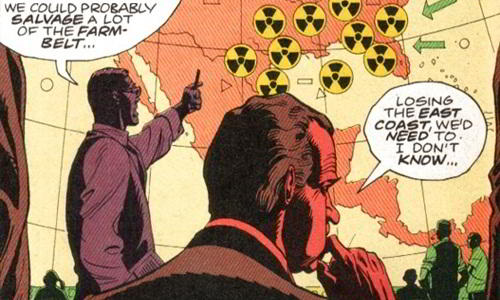 In one of the storylines of the Watchmen’s alternative realm of Earth, the 37th United States President and one of the most notable advocates of the Republican political party Richard Nixon is seen as the president serving till 1985.

Nixon’s regime extended when the evil Comedian successfully assassinated John F. Kennedy and that was just the starting of the killing spree as the Comedian set his eyes on journalists Bob Woodward and Carl Bernstein, who suffered the same fate at the hands of the deadly foe. 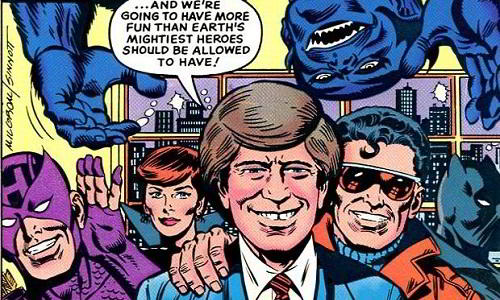 Desperate times call for desperate measures and that was exactly what Marvel Comics did when they were hiring any old loser in the alley as their writers and plot planners for various storylines. Such crucial and untimely decisions lead to one of the most outrageous cameos ever. The host of the then-one-year-old show Late Night with David Letterman, David Letterman appeared in one of the narratives of the Avengers.

In addition to not achieving the desired sales results, what made matters worse was the fact that none of the major Avengers members appeared in the entire issue; forcing the rookie host to crack jokes with members having a slight contribution to the entire team. 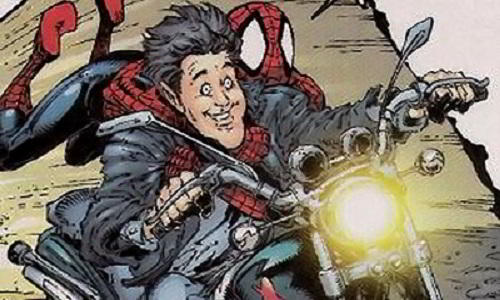 Marvel Comics’ attempt to reuse the idea of involving talk show hosts teaming up with their superheroes to battle against crime resulted in an outrageously humorous issue titled Jay Leno & Spiderman: One Night Only featuring the host of ‘The Tonight Show with Jay Leno’, Jay Leno joining forces with the Spiderman.

While the two are shooting a commercial for General Motors which involved extreme stunts, the dysfunctional duo’s activities meet an unexpected halt due to a group of ninja assassins. The fans were in for a major surprise since many of the ninjas were defeated by then-52-year-old Leno who used amazingly impressive ninja tactics of his own; surprising even Spiderman as well. 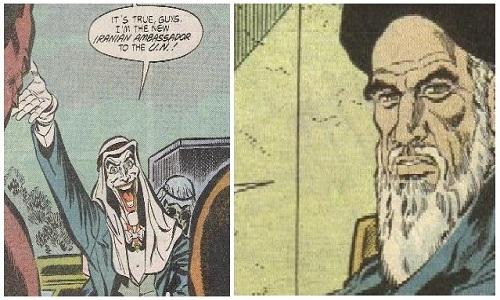 In the controversial issue Batman: A Death in the Family, a twisting turn of events takes place when the Joker, after just killing Jason Todd (the second Robin) and his mother in a warehouse filled with explosives, meets none other than Sayyid Ruhollah Mostafavi Musavi Khomeini.

The evilest man in real life blessed the evilest man in comics with political immunity and diplomatic rights by appointing him as the ambassador of the Islamic Republic of Iran; giving the Clown Prince of Crime an opportunity to unleash his laughing gas in the Pentagon during his speech amongst advocates from around the globe. 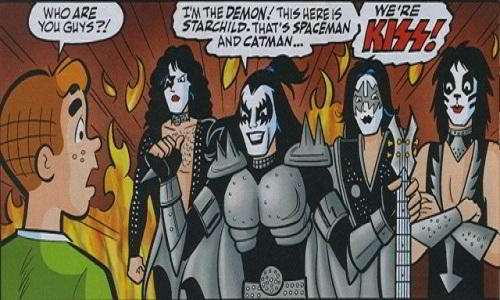 Billed as the four-part Archie series which would bring together two pieces of Americana for the first time, CEO of Archie Comics and die-hard KISS fan Jon Goldwater made a deal with the devil when he negotiated with none other than the fire-breathing Demon and bassist of the band Gene Simmons about a partnership.

The series turned out to be one of the most moving and finest pieces of comics that Archie Comics has been able to produce throughout its run. Simmons himself stated the notion as a groundbreaking moment for anyone wanting to rock and roll all night and party every day. 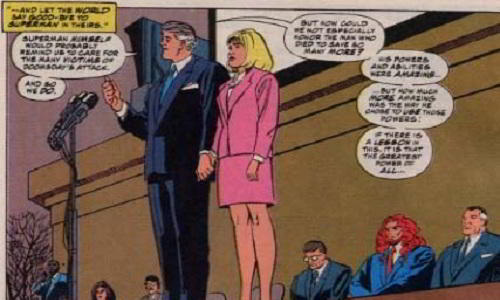 In one of the most breathtaking storylines in comic book history, The Death of Super-Man showcased a brutal battle between the Man of Steel and Doomsday which resulted in both combatants literally giving all they had, including their own life.

After an emotional scene of Superman dying in the arms of Lois Lane, a funeral was observed for America’s greatest protector; prompting the attendance of the country’s then-president and First Lady, Bill and Hillary Clinton.

Not only that, but the couple had front seats for Super-Man’s gloomy memorial service. The Man of Steel eventually returned when Hank Henshaw (Cyborg Super-Ma) and the Eradicator used the fallen hero’s birthing matrix to recreate him. 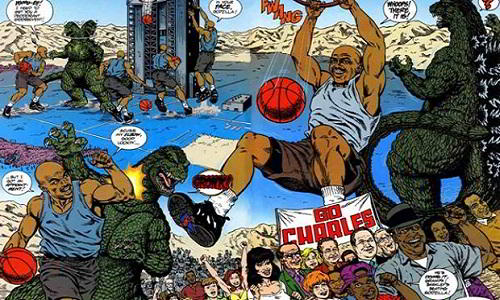 Dark Horse Comics shocked comic fans around the country with their outrageous one-shot comic featuring none other than the Japanese monster Godzilla and NBA’s Round Mound of Rebound Charles Barkley engaging in a basketball match in New Jersey.

For reasons beyond explanation, Barkley is the same size as the nearly 50-meter-tall monster who, as weird as it may sound, seems to know every single basketball trick in the book without any training. After Barkley successfully wins the game, the veteran shows some spirit to his opponent by providing him with a few tips and gifting him giant pairs of Nike footwear. 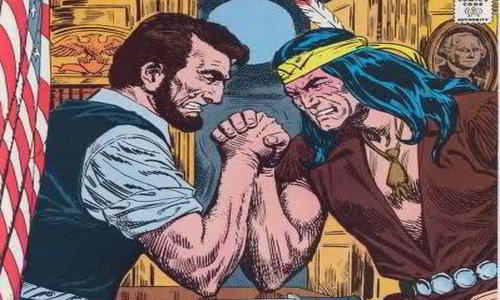 If you thought the basketball match was something, take a look at the arm-wrestling match featuring DC Comics’ native Indian-themed hero Brian Savage aka Scalphunter battling out against none other than the 16th President of the United States of America.

After taking each other to the limits with all of their might to determine the better man, both men stopped after realizing that the two are evenly matched. Soaked in their own sweat, the combatants earned each other’s respect without settling for a victor. However, DC Comics has insisted that both men had won.

6. Eminem Teams Up With the Punisher 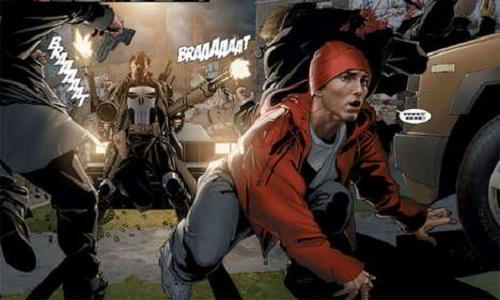 All the Slim Shady fans are aware of the story behind ‘Bad Meets Evil’. What they might not know is another chapter of Eminem’s life in which he met none other than Frank Castle aka the Punisher. After a course of misunderstanding, the Punisher kills most of Eminem’s crew but the latter is saved by the villainous Barracuda. Once gained his trust, Slim Shady teams up with the foe to avenge his homies.

Throughout the course of the storyline, the rapper realizes the true nature of the two crooked icons and allies him with Castle to finish, and eventually succeed, the reign of Barracuda. 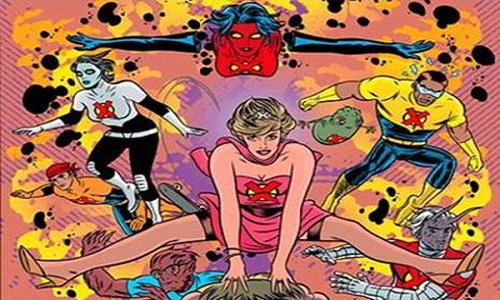 The idea of a zombified version of Princess Diana joining the X-Statix – a group of average mutants best described as X-Men wannabes – the media made an abundant amount of people spin their heads, including the British Royal family.

After many controversial debates and the realization of how foolish the idea of a significant icon of the world joining a team of super-powered meatheads is, Marvel Comics scrapped the idea and replaced Diana with a fictional pop artist named Henrietta Hunter – a Diana-like character with a bouffant haircut.

The change, however, failed to make any things better for the sales as after eight issues, the storyline was immediately shut down as Marvel tried to abruptly distance itself from its ill-advised mistake. 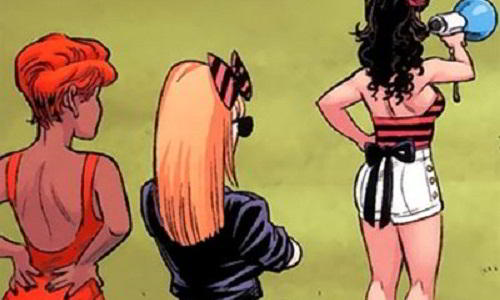 Either Archie Comics is able to predict the future or happens to create the biggest mind-boggling coincidence a pop music fan of the present generation can come across.

Despite no faces being shown of the two female characters on the extreme left, it will not even give any brain surgery patient to realize that those two are not ordinary spectators. They are, as a matter of fact, the Caribbean Queen, Rihanna, and the wardrobe experimentalist Lady Gaga. 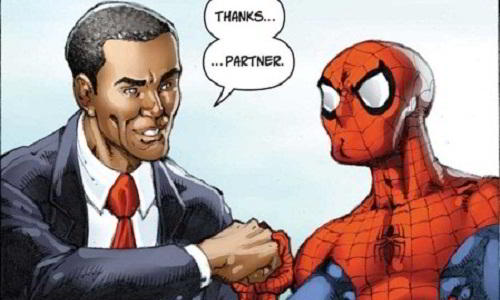 As the festivities for the presidential inauguration of Barrack H. Obama are on their way, Peter Parker takes photographs for The Daily Bugle. The excitement is cut short when he sees another Obama coming out of his limousine. When his spider senses tingle, Parker dons his Spiderman costume to investigate the scene.

Once asked the nickname of Obama by the presidents, the real one prevails while the fake one becomes furious and reveals himself as the dastardly Chameleon. After being arrested by Secret Service, President Obama admits to Spidey that he has always been a fan of him and fist bumps him while expressing his gratitude.

2. Archie and the Gang Meets Glee 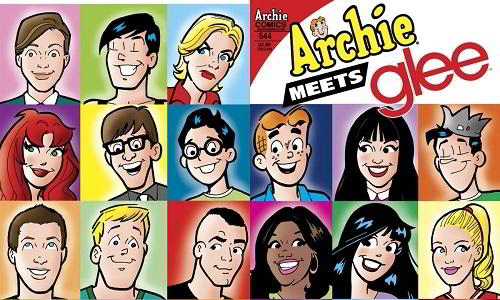 Archie Comics may have several celebrity cameos throughout its years but this one might be the granddaddy of them all as the characters of both Archie Comics and Glee television series are together under one roof; made possible by Dilton Doiley’s “Portal-porter” device.

Written and conceptualized by Roberto Aguirre-Sacasa, one of the writers from the Glee television show who wrote a few comic books back in the day, the four-part comic book issue is one of the most thought-provoking and fascinating storylines.

1. Boxing Match: The Man of Steel vs. The Greatest 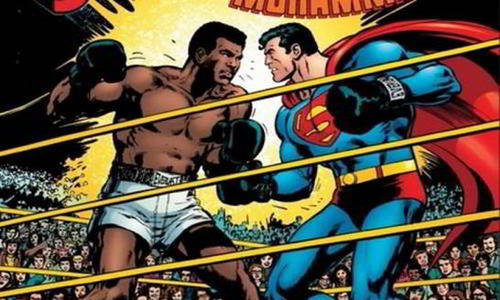 Confident that he can sting Superman like a bee, the latter begged to differ and the match of the millennium was set. The Man of Steel may have defeated countless obstacles that stood before him but facing the Heavyweight Boxing champion in his own game proved to be something that not even Superman expected to be that much difficult.

The match, being witnessed by thousands of fictional and real celebrities and iconic figures, was a thriller with Muhammad Ali emerging as the victor by knockout. Little did the world watching them know that it was all part of a plan to save the planet from an alien invasion. Once the two save the Earth from the upcoming attack, the duo shares a moment of mutual respect; ending the storyline with Ali proclaiming both men as the greatest.

Which of the above-mentioned astounding celebrity cameos in comics surprised you the most? Share with us your thoughts in the comments section below!