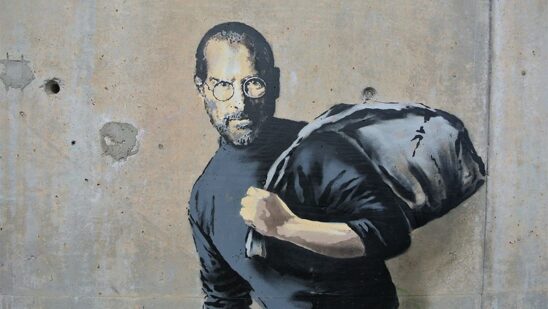 Steve Jobs, counted among the greatest American CEOs of his generation, was truly an iconic man whose quirks too, are as famous as his products. The  former Apple CEO passed away a few days ago and while you know him as the guy to thank for why you have an iPhone, here are 10 rare things you didn’t know about Steve Jobs aka the greatest pirate of the silicon valley:

So, like Mark Zuckerberg who dropped out of Harvard to create Facebook, Steve Jobs too had some better things to do than going to school. He attended Reed College in Portland, Oregon, but dropped out after 6 months.

A year later he co-founded Apple.

Jobs was so attached to Apple that most people don’t know that in 1986 Steve Jobs actually purchased the animation studio, Pixar, for $5 million and gave the company an additional $5 million to experiment with animation.

Jobs was also one of the people responsible for the sale of Pixar to Disney nearly 20 years later.

Jobs had got his name listed as either primary inventor or co-inventor in 338 US patents or patent applications related to a range of technologies from actual computer and portable devices to user interfaces (including touch-based), speakers, keyboards, power adapters, staircases, clasps, sleeves, lanyards, and packages.

After staying 10 years away from Apple he returned in 1996, a company that struggled through most of the late ’80s and ’90s. But as soon as he returned, Steve Jobs started doing his magic all over at Apple, again.

A few years later in 2001, he developed the iPod and never looked back.

Before marrying his wife Laurene Powell in 1991. Steve dated Diane and Joan. He also fathered a child with a woman named Chrisann Brennan but denied paternity, claiming he was sterile.

He later acknowledged being the baby daddy.

He’s actually a Pescetarian, which means he eats fish but no other meat. He will eat eggs and dairy and anything else a vegetarian would eat.

After dropping out of college, Jobs traveled to India, became a Buddhist, and experimented with the psychedelic drug LSD.

Steve describes his LSD experiences as one of the two or three most important things he has done in his life.

8. He Was a Buddhist

He was such a hardcore Zen Buddhist that he almost thought about joining a monastery and becoming a monk. He was married in a Buddhist tradition by a Zen monk who was his own personal guru.


Steve Jobs estimated net worth is $8.3 Billion. He was number #39 on the Forbes list of the Richest People in America in 2011.

His father’s name is Abdulfattah Jandali. So, Steve Jobs biologically was half Syrian Muslim. His father Jandali is a vice president at Boomtown Hotel Casino and was once a professor at the University of Nevada, Reno.

Do you know any interesting facts about Steve Jobs that we missed? Share with us in the comments below!