Home » Movies » Why 3D Should Stay on the Big Screen

Why 3D Should Stay On The Big Screen 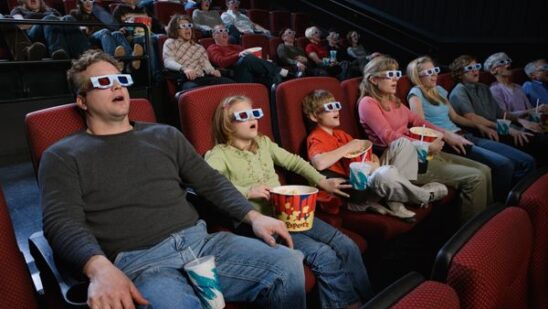 Never before has a 3D film been so popular. Some of the highest-grossing films in recent years have all been in 3D, and the trend is most likely to continue. Audiences all around the world have lined up to experience the enchanting effects of the three-dimensional film. However, this is a medium that is often best viewed in the cinema. With the use of a large screen, properly placed stereos, and vast space, 3D is able to properly translate to the audience. Yet when viewed at home, there can often be an element missing. Even though many companies are creating high-end machines to play 3D films at home, the experience is often nothing close to what it was at the cinema. With the increasing demand for 3D films, it’s worth considering whether this medium will ever properly be experienced at home. Here’s why 3D should stay on the big screen:

Only a Theater Holds a Large Audience

One of the enjoyments of experiencing a 3D film in theaters is viewing it with an audience. Oftentimes, the 3D visuals are so realistic that everyone reacts simultaneously. It creates a true experience, one that is nearly impossible to create at home.

An average cinema may hold around a hundred people, compared to much fewer at home. The depth of the auditorium creates a fully immersive and dynamic experience. Some 3D films make perfect use of this space, which can be hindered when viewed at home. The large capacity of the theater allows the 3D to fully shine, whereas in your home it has limited space.

A Theater Offers Sound and Picture Quality to Match

When watching a 3D film in theaters, you are given only the latest and highest-quality technology available. This allows the 3D to be viewed exactly as it was planned, with every subtle nuance and flair. The grandiosity experienced in the theaters can be very difficult to recreate at home.

When viewing in your living room, you have much less space to experience the full brevity of the film. The film may even show its shortcomings if it is viewed as a lesser-quality player. This can be highly detrimental to the viewing experience, and may even change your opinion of the film altogether.

Benefits of a 3D Home Theater

However, there are some benefits regard to viewing 3D movies at home. Although it may not recreate the initial theater experience, it can provide enough entertainment to warrant the purchase. You will have the film, in full 3D, available to watch whenever you may desire.

Currently, it is very difficult to fully recreate the theatrical experience. However, recent technology has been advancing at an intensive rate. If you are interested in adding 3D effects to your home theater, some blu-ray media players offer this capability.

As the systems get more advanced, it becomes all the more promising that the theater experience can eventually be recreated. 3D systems for use in the home are evolving at a rapid rate, and will eventually provide the purest 3D experience.