In the midst of these wintery days, the pleasures of the sea, the sun on the beach, and the cocktails, of course – seem very far away. As the festive season dominates our time and pillages our bank accounts, the prospect of a fabulous vacation seems all but a distant desire. Quite depressing, no? So let’s make it worse by looking at places we’ll never go, visited by people we’ll never be! If anything it might just make us feel a little warmer for a few moments (whilst plaguing us with nausea-inducing envy, of course). When you’re rich, famous, and gorgeous (or have a face that seemingly bears a constant grudge, cough, Kristen Stewart) it’s only conceivable that when it comes to your vacation, you only have the best of the best. Not only that but the most in vogue of the best of the best. A happy camping trip in the great outdoors? Forget it. A cozy 400-year-old cottage, miles from the nearest town in the French countryside? Absolutely not, who the hell is going to see you there? What about the Four Seasons in… – Are you mad? Everyone has been there. No, when you’re a certain type of happenin’ celebrity you’re not just going to slum it in any old five stars. Vacations are a fashion statement. Celebrities don’t just beach themselves by the pool of a three-star with squinting sweaty red faces like the rest of us. Oh no, they do not. We all wish we could take vacations like these ourselves, and some of us may be able to do so at some point in our lives, especially in our retirement. However, before we can do this, we must ensure that all of our finances are up to scratch and that they allow us to live in luxury. Here is a list of top celebrity vacation spots in the world: Ever in vogue, St. Tropez in the French Riviera is the Chanel No.5 of celebrity vacation spots, a timeless classic. Favored by stars old and new, this playground of luxury relaxation and glamorous recreation has everything a stinking rich celeb could want – and its popularity has never waned. Famous humanoids such as Catherine Zeta-Jones, Naomi Campbell, Posh Spice, and Tom Cruise have all vacationed here; enjoying the luxury shopping, the Michelin-starred restaurants, and fashion designer-designed boutique hotels, gargantuan private villas, and of course the beautiful scenery.

Spending tens of thousands and hiring a multimillion-dollar yacht is considered by a lot of stars as the way to enjoy St.Tropez, and they can often be sighted from the shore (with a good enough zoom lens) enjoying celebrity cruises of their very own. Accommodation on dry land doesn’t come to a whole lot cheaper, however, a stay at the 5 stars Hôtel Villa Belrose, for example, can set you back a cool $3500 per night; and with people like Mick Jagger choosing to wed there, it certainly had the starry stamp of approval. A Mexican Oasis, Cabo is a particularly popular one amongst the Hollywood elite with its close proximately to Los Angeles. Offering equal measures of relaxation and expensive tequila-laced partying, Cabo is a firm favorite amongst younger celebs with socialite tendencies.

The celebrity infested ‘One and Only Palmilla’ hotel is most definitely the place to be seen, and with prices starting at a weighty $500 per night, you can bet the bathrobes are worth stealing too. The second-largest Hawaiian island, Maui has a surprisingly small population for such a good-sized parcel of island paradise, further contributing to its appeal for those stars seeking a low-key escape from the world. Adored for its glorious weather, beautiful beaches, and breathtaking scenery, Maui has been a firm celeb favorite for quite some time.

Such is its popularity amongst the rich and famous, People in Hollywood reported that:

“you can probably run into more celebrities on the beaches in Maui than you would find shopping here on Hollywood Boulevard”.

Consequently many have snapped up palatial vacation pads, including Clint Eastwood, Cher, and Oprah.

Whilst other big names, such as Sharon and Ozzy Osbourne have tied the knot in one of Maui’s outrageously expensive but sickeningly luxurious hotels. Movie buffs may not be interested to know that dinosaur thriller Jurassic Park 3 was also filmed here, so be on the look out for large and dubious footprints in the sand. Chances are however they’ll just belong to Paris Hilton, another Maui regular.

Saint Barthélemy – The Show Off 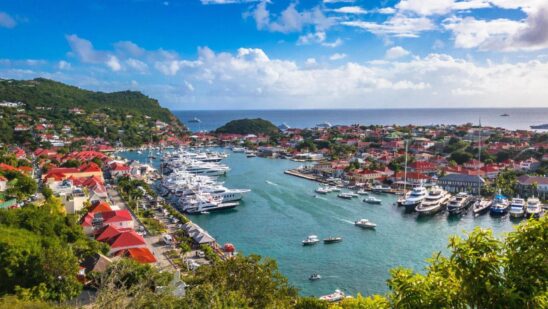 Dubbed by Americans as St. Tropez without jet lag, Saint Barthélemy is a small island in the French West Indies with super-rich celebrities clinging to it like limpets. Consequently, the picturesque resort is perfumed with the overpowering stench of money and opulence.

A favorite escape for business tycoon Roman Abramovich, he moors his mega-yacht there and owns an $89 million estate on the island, whilst his legendary NYE bash hosted on the island costs him a palpitation-inducing $8 million annually.

Once a romantic getaway, St. Barts has now been invaded by the celebrities who flock there for the exclusive villas, luxury shopping, reservation-only restaurants, and glamorous party scene. Expect to see the celebrity elite here, from Jay Z and songbirds Beyoncé and Mariah Carey to good old Harrison Ford. If you’re greedy and want an island all to yourself, then look no further than Sir Richard Branson’s Necker Island in the Caribbean. The uber-luxurious island paradise has hosted hordes of famous faces, including the late Princess Diana, Kate Winslet, and Steven Spielberg, all the way to Queen Rich herself, Oprah Winfrey.

Hiring the entire island will cost you $54,000 per day, which includes a team of 60 staff, and full use of the amenities. We should think so too for that price.

So there you have it, just a handful of adored celebrity vacation spots throughout the world! Now back to the horrendous realm of reality!