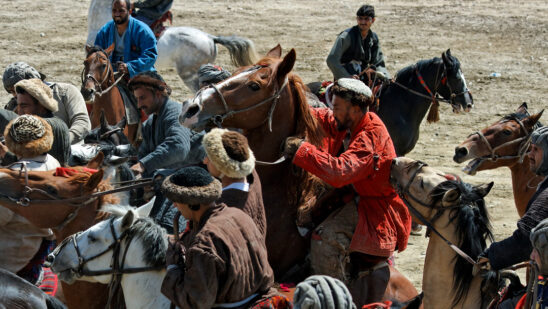 The idea of sport usually starts with football and ends with baseball, with a generous dose of basketball and hockey thrown in. But what about those of us who like to see something new and a little different than what is being regularly dished out on sports channels? Turns out, the world of sports has a lot to offer for people like us too. Let’s take a look at seven of the least popular sports in the world. These games may not have million-dollar prizes or throngs of rabid followers, but they certainly are different.

Here’s a game that combines brain and brawn. It has the brutality of boxing and the intelligence of chess. The game features alternating rounds of chess and boxing.

You can win by checkmating your opponent or by knocking him out. Pretty cool, right?

The best part about this sport is that it is mandatory to consume an alcoholic beverage prior to a match. We really wonder how it remains one of the least popular sports in the world!

Here we have one of the few sports that allow people to showcase a wide range of rare, extraordinary skills. Such unusual skills as seed spitting, cigarette flipping, dumpster diving, mud belly flops, and toilet seat tossing.

If you think you have what it takes, you can compete at the Summer Redneck Games in East Dublin, Georgia.

This Finnish sport takes obstacle course racing to a whole new level. You have to race through an obstacle course carrying a girl, who grabs onto your neck and back and hangs upside down.

If you win, you get to compete at the Wife Carrying World Championships in Finland. The prize – get this – is your wife’s weight in beer. Now you have one more reason to love the Finnish people.

Think you can iron a shirt? How about doing it in the middle of a busy street? In a canoe? On top of large statues? Or while skiing, snowboarding, or parachuting?

One of the supremely awesome yet least popular sports in the world, extreme ironing is basically England’s way of testing your multitasking skills.

The sport is simple itself. It involves hundreds of sheep dashing past competitors who try to count them as accurately as possible.

After all, what better way to test your math skills than counting sheep? The game is popular in, you guessed it, Australia. Presumably, the trickiest part is trying not to fall asleep.

How does the idea of keeping two fiery, aggressive rodents right next to your private parts sound to you? That’s what this game is all about. You have to tie your trousers at the ankles, place two ferrets inside, and fasten your belt. You then have to stand in front of a judge for as long as you can.

The game originated in England, where a bunch of masochistic coal miners thought it would be fun. Understandably one of the world’s least popular sports, ferret legging gives a whole new meaning to the term ‘extreme sport’. The best part, of course, is the rules. You cannot wear any underwear. You cannot sedate the ferrets. You cannot file or blunt their teeth either. You are even encouraged to wear white trousers to proudly display the blood from the bite wounds!

Ferrets, if you did not know, have twelve premolar teeth that can cut through flesh like butter. Something you can mull over while your private parts are getting ravaged by those gentle little creatures.

So do you fancy trying out any of these lesser known sports? Or know of any others that are even more obscure?