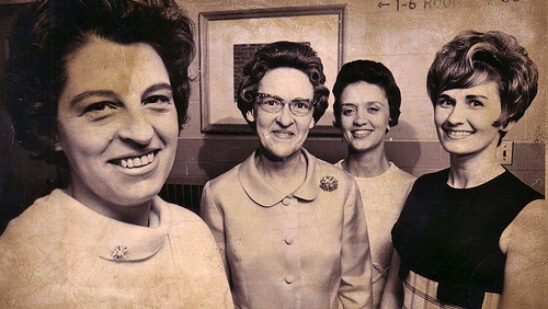 Hollywood often takes inherently dramatic situations and scenarios and turns them into enthralling films. The classroom, at almost any level of instruction, is filled with the kind of tension and drama that naturally turns into a good movie. Throughout its history, Hollywood has made several films about teachers and the conditions that they encounter in the environment. In these films, the teacher often plays the role of the hero. Usually, he or she is the underdog, the character who must sacrifice in order to help others achieve or otherwise surmount some difficulty in life. Here we take a look at some great movies about inspiring teachers:

Though it was written decades ago, this film about a young teacher in a tough school still rings true today. An idealistic English teacher, portrayed by Glenn Ford, tries to survive in the same South Bronx environment with hoods such as that played by Vic Morrow, who debuted in this film.

The students in this film do not seem far away from many of our own age. They smoke, steal, and otherwise misbehave while Ford’s Richard Dadier struggles to maintain some semblance of order.

Sidney Poitier portrays an engineer-turned-teacher in a London school in which the staff has virtually surrendered to their rowdy student body. Faced with a seemingly unwinnable situation, the new teacher changes the game and plays by his own rules.

He throws out the textbooks and starts teaching kids about life lessons that they will not soon forget. His is one of the earliest films to take on topics such as racial and economic discrimination.

Nick Nolte is ‘Alex Jurel’ in this dramatically-tinged film about an urban high school in the Midwestern United States. Jurel is an experienced Social Studies teacher who is portrayed as caught amid the roiling tides in a typical public school. Legal, ethical and moral issues abound as he struggles to make sense of his job.

The comedy of an insane asylum resident accidentally a full-time teacher is in contrast to Jurel’s difficult decision o help a student get an abortion after being impregnated by her gym teacher.

Edward James Olmos portrays Jaime Escalante, a new teacher who really wishes he could be working in computers but has not been able to find a job in that industry. Instead, he challenges the status quo among teachers at his new school by teaching underachieving students about calculus.

His inspired learners, most of them from extremely underprivileged backgrounds, finish their time with Escalante by exceeding expectations on the Math AP exam for college.

Richard Dreyfuss is ‘Glenn Holland’, a musician who has only fallen back on teaching to make ends meet while he gets his music career together. Marriage, children’s economics, and commitment forge his character slowly over the years until he becomes one of the school’s most beloved and inspiring teachers.

He sees his students succeed, fail, and even die in war. The film ends with his community’s tribute to him in musical form.

These films span several decades. They have in common one important idea. The teachers portrayed here to overcome obstacles that others deem insurmountable for the sake of their students. Did you enjoy our list of the best movies about inspiring teachers? Let us know in the comments below!