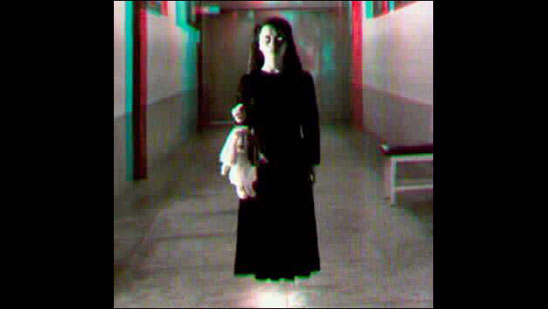 Do ghosts exist in real life? True ghost photographs seem to be an authentic possible answer (an equally scary too)! From Halloween to the Chinese ghost festival aka Yu Lan, ghosts have become a vital part of our popular culture. Real or not, ghosts are definitely not even remotely near to what ‘Casper’ looked like. The following true ghost photographs are considered the very best when it comes to proving the existence of ghosts. Are these really the top 15 true ghost photographs ever captured? You be the judge!

15. Mother’s Ghost at the Backseat 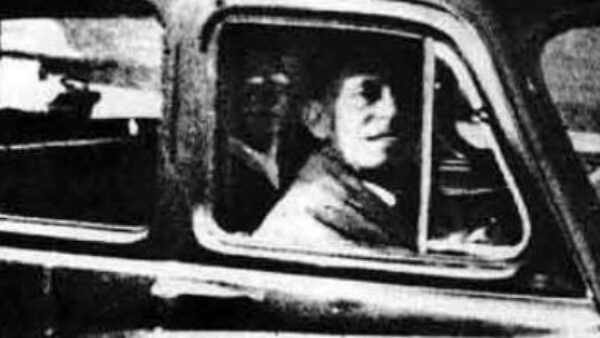 After visiting her mother’s grave in 1959, Mrs. Mabel Chinnery went back to her husband who was isolated in their car parked near the grave. Out of nowhere, she thought about taking a photograph of her husband.

When the picture came out, they learned that isolation was out of the question as a face with glasses appeared to be sitting in the backseat. Despite being frightened, Mrs. Chinnery acknowledged the face like none other than her own mother’s. Photographic experts found no mischief with the image and called it “genuine” – it turns out that when it comes to taking family pictures, the mother was in no way going to miss all the fun!

14. Never Too Late for a Group Photo 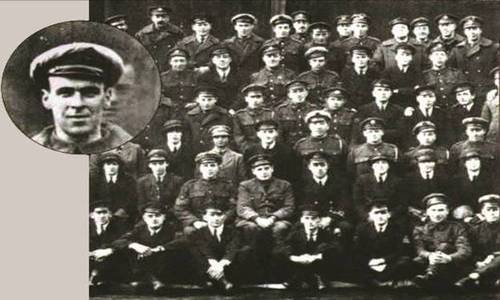 Taken by retired RAF Officer Sir Victor Goddard in 1919, the photograph is an amalgam of humor and eerie at the same time. Two days earlier, mechanic Freddy Jackson accidentally strolled into a spinning propeller blade; which killed him instantly. His funeral was held the very next day.

When the squadron of the Royal Navy vessel HMS Daedalus got together for a group photograph, everything went fine and nothing out of the ordinary until its development as a ghoulish face appeared behind a squadron member; recognized as none other than Freddy the dead mechanic.

13. Lord Combermere and his Favorite Chair 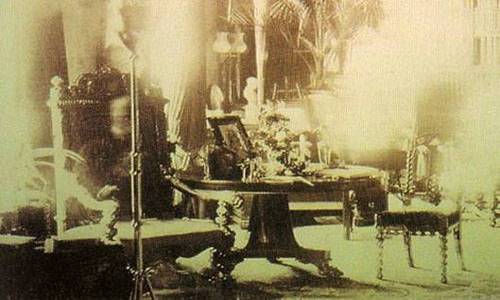 Lord Combermere was the Governor of Barbados whose reign was cut short by a tragic incident involving himself being struck by a horse carriage in 1891 – resulting in his immediate death. During his career, Lord Combermere exhibited a special attachment to the large chair in the library of Combermere Abbey.

During his funeral, Sybell Corbet placed his camera in the library for a one-hour-long exposure photo and went to the memorial. Upon development, a glowing image of the Lord himself appeared in the photograph; sitting on his favorite chair. Due to the long exposure, it can be possible that a similar-looking man might have sat on the chair for a while but members of the mansion confirmed that no one was present there at the time of the funeral. 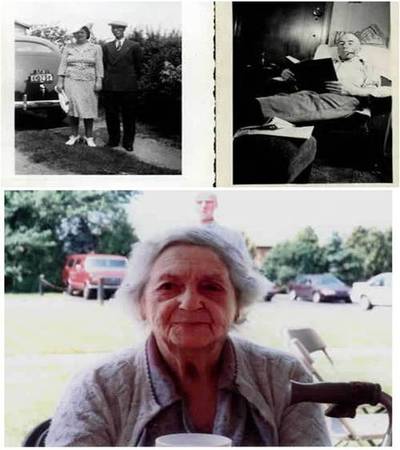 People claim that if you really love someone, there is no force on earth that can keep you apart but this photograph takes the cake.

Denise Russel narrates an incident involving her sister, mother, and grandmother attending a picnic. Her grandfather had passed away long before the picnic. Though many photographs were taken, one frame captured something drastically unusual.

While going through family photos on Christmas in 2000, they observed the photograph and spotted an aged man standing behind their dead grandmother. Looking familiar, they further dug up family photos; reaching a state of a jolt to learn that the man is none other than their grandfather. 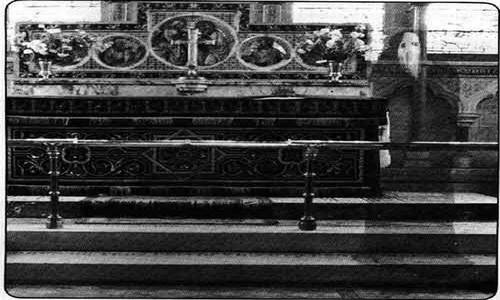 Shot by Reverend K. F. Lord in 1963, the story of the tall ghost at Newby Church in North Yorkshire, England is one of those that just won’t go away. Though Lord boldly states that nothing was there while taking the photograph, his claim has proved to be true since the study of the photograph’s negatives showed that double exposure had nothing to do with it.

After the development, a 9-foot Grim Reaper-like figure appeared. However, upon further investigation, no sightings of ghosts or supernatural activities were found to have occurred in the church nor any record of a 9-foot monk or priest previously served in the church was found. 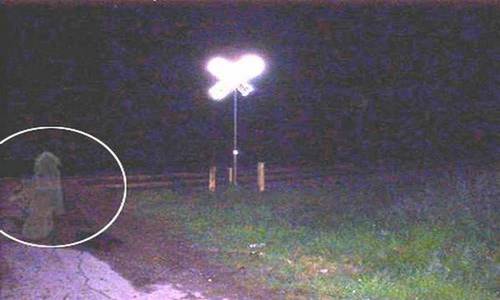 This photograph of a transparent girl at the railroad crossing in San Antonio, Texas is one of the most renowned and talked about true ghost photographs in the world. Location of a heartbreaking incident involving the killing of many school children; the sight has since been a home of nefarious and unexplained events and sightings.

Captured is the most publicized photo of the railroad crossing which shows a visible but transparent middle-aged girl in a nightdress holding what most likely could be a teddy bear and a dog sitting beside her. 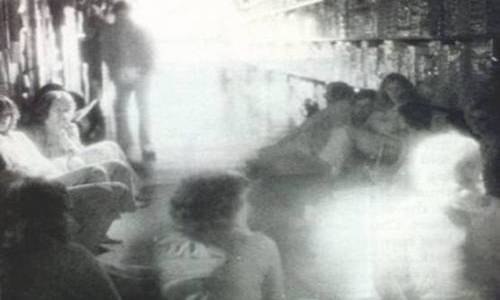 The Toys-R-Us store in Sunnyvale, California was built in an orchard in 1970. Shot by the crew members of the television program That’s Incredible. What we can see leaning against the wall in the photograph is none other than John, the Toys-R-Us ghost.

Believed to be the restless spirit of a young man who bled to death after accidentally chopping off his leg in 1869; many have witnessed the existence of John at the store such as something whispering employees’ names, turning on water faucets, and most remarkably, his name appearing several times during séances.

8. The Barn Ghost in Hertfordshire, England 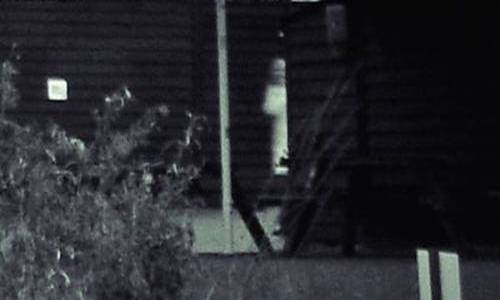 Before a wedding at a local barn in Hertfordshire, England, photographer Neil Sandbach took several photographs of the area. Upon development, Neil observed what seemed to be a glowing and clearly floating boy wearing white clothes.

After showing the would-be married couple the photograph, the staff was asked about any bizarre incidents concerning the farm. Admitting that several encounters have been made with what seems to be a ghost of a boy; Neil’s photograph was exactly in accordance with what those people were talking about.

7. The Ghost of Decebal Hotel 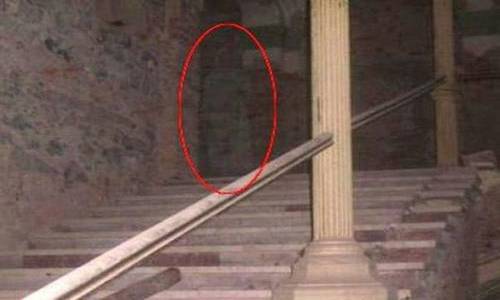 Located in Romania, the Decebal Hotel is one of the oldest hotels in the country. It is believed that the site has an ancient Roman treasure buried somewhere underneath it and a feminine ghost protects it.

When the 33-year-old Victoria Iovan took a photograph of the hotel’s stairs, a ghastly tall female wearing white garb appeared in the picture and became the strongest proof of the legend in 2008.

6. The White Lady of Worstead Church 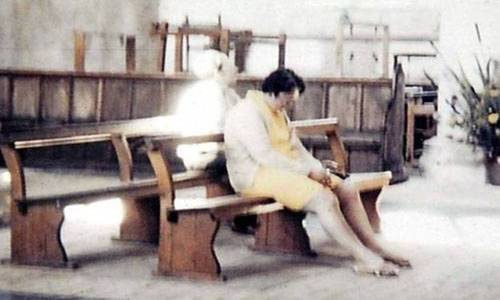 The legend of Worstead Church’s White Lady states that the ghost comes near a person if he/she requires heeling while visiting the church.

In 1975, Mr. and Mrs. Berthelot and their son visited the Church. When Mrs. Berthelot, surviving on antibiotics at that time, was photographed by her husband while sitting on a bench praying, the family was convinced that the legend is indeed true after the pictures were developed. 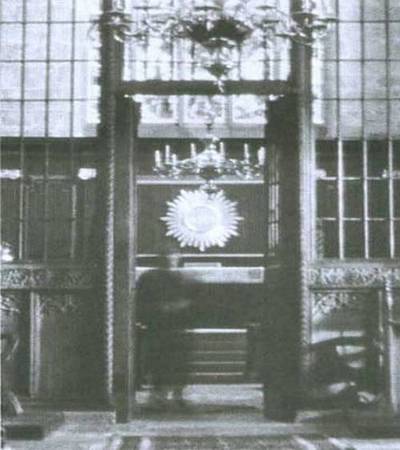 Great Britain has a fair share of real ghost sightings on its own and the Sefton Church is another example of a dwelling where a mysterious black figure was observed in a photograph taken inside the church.

4. Ghost Baby on a Grave 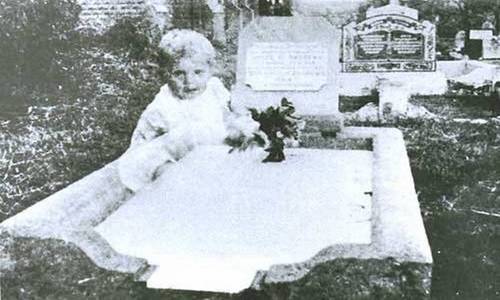 On one of her frequent visits to her dead daughter Joyce’s gravesite in a cemetery located in Queensland, Australia; Mrs. Andrews took a snapshot of the grave. Upon development of the film, she was caught by surprise when she noticed an infant not only sitting on her daughter’s grave but also looking directly into her eyes.

Mrs. Andrews denied the presence of babies at the time of the snapshot nor believed it to be a ghost of her daughter in her youth. Upon further investigation, the gravesite was found to be near the graves of two infant girls. 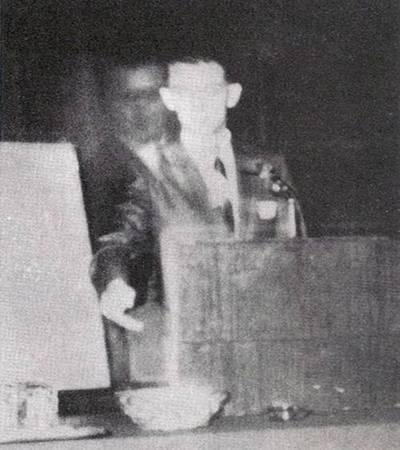 In 1968, during a forceful speech by author Robert A. Ferguson at a spiritualist convention in Los Angeles, California, several photographs were captured of him but only one of them would get a place in history as it showed a luminous figure right beside him.

Ferguson, after much observation, acknowledged him as Walter, his brother who died during World War II in 1944.

2. The Ghost of Bachelor’s Grove Cemetery 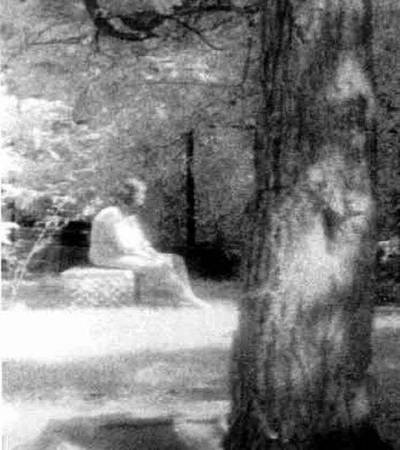 When it comes to true ghost photographs, Bachelor’s Grove Cemetery has a pretty nasty reputation of its own due to several unexplained glowing lights, sounds, and sightings. In 1991, members of the Ghost Research Society (GRS) were investigating a case in the cemetery in which member Mari Huff was taking pictures of the graveyard with his high-speed infrared camera.

After the film roll was developed, society was shocked to see a photograph that showed a transparent woman sitting on a grave wearing out-of-date clothes; though they claimed no one was there at the cemetery other than the members themselves.

1. The Brown Lady of Raynham Hall 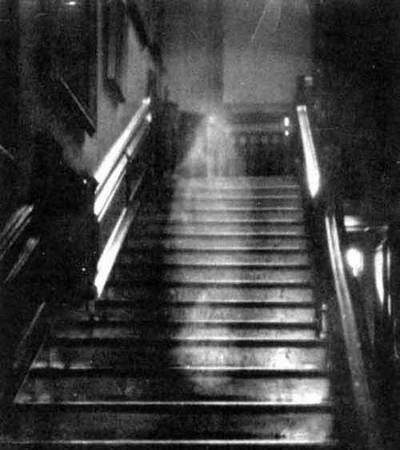 Captured in 1936, the snap of “The Brown Lady” in Raynham Hall in Norfolk, England is the most famous ghost photograph of all time. Named so because of the brown-colored brocade people have seen it wearing, the ghost is said to be of Lady Dorothy Townshend; the second wife of Charles Townshend who locked her in the mansion’s rooms till her death after he found out about her unfaithful activities.

Many, including King George IV, had claimed about a ghostly figure walking the halls. A photograph was finally captured of the Brown Lady by two photographers who were given a task to capture photos of the hall for an issue of Country Life magazine.

The image eventually became the most popular real ghost image ever taken and even to this day enjoys epic fanfare when it comes to the picture of a real ghost – the Brown Lady however didn’t like this attention and as a result, has never shown herself again since 1936!

Are these really genuine true ghost photographs ever captured? Which of these ghost pictures and stories is the scariest one? Let us know in the comments section below!