Home » Movies » Top 10 Behind the Scenes Facts About Harry Potter

Top 10 Behind The Scenes Facts About Harry Potter 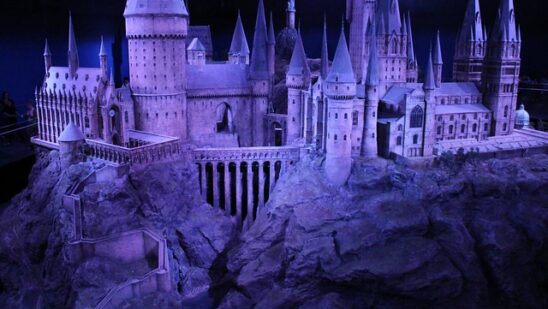 Harry Potter movies have all been top-ranking box office hits. The mesmerizing stories about the boy wizard have both adults and children enthralled, meaning that all eight releases are on the list of highest-ever grossing movies, worldwide, with Harry Potter and the Deathly Hallows at No 1. But how much do you know about the making of these iconic Harry Potter films? Here are some interesting behind the scene facts about Harry Potter movies that you didn’t know:

The zig-zag scar that is unique to Harry Potter has been applied by make-up women approximately 5,800 times. But only 2,000 of these applications have been on Daniel! The other 3,800 have been on the foreheads of the numerous film and stunt doubles used in the filming.

The iconic glasses worn by Daniel Radcliffe have been replaced no fewer than 160 times over the eight Harry Potter films. However, most of them do not have glass in them, as they tend to reflect off the stage lights and cameras too much.

A whopping 588 sets were created over the ten years span in which the films were made. The biggest set was the Ministry of Magic.

The art department that worked on the Harry Potter franchise of films had a total of 58 people, who worked full time. They were working on this project for over 10 years, and in that time over 35 babies were born to members of the team.

The set for the Great Hall was used in every single Harry Potter movie and was one of the first sets created for the film. It is also the longest-standing set of the entire franchise. The inspiration behind the design of the hall came from the real-life dining hall at Christ Church, Oxford University.

It is so big, that it could house 22 double-deckers inside. While the stone looks very realistic, it’s actually a wooden structure, covered with PVC cladding, then brought to life by the scenic artists to be made to look like a real-life stone.

In total, over 90 tonnes of plaster were used to complete the Great Hall, taking 30 art department staff 18 weeks to complete!

The benches and tables in the Great Hall are 121 meters in length and they were made especially for the film. The set designer Stuart Craig encouraged all the actors to put their own graffiti on them as the film went on, making it personalized and of course very valuable!

The locomotive used as the Hogwarts Express was made in 1937 and comes from Carnforth in Cumbria. However, in railway terms, “Hogwarts Express” would describe the route of the train, not the name of the destination, so Hogwarts Castle would be a more appropriate moniker.

Some of the school scenes have so many extras, it is hard to count, but over 600 school uniforms were made in the making of Harry Potter.

The final scenes of the Deathly Hallows rack up the most cast on screen at one time, with 400 Death Eaters and Snatchers battling it out with 400 pupils and teachers from Hogwarts in the Great Hall.