The Evolution Of Train Speed 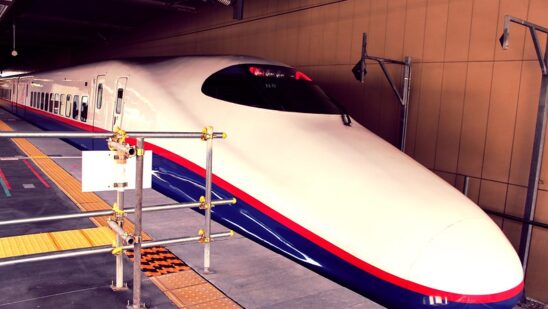 Humankind’s ability to move faster has progressed and we pride ourselves on the rate of this progression. The train, for example, is one of the most popular forms of transport; with continuous alterations and modernizations over the years; this really has been a success story, giving us the fastest way of traveling on land. Of course, this is a form of transport that has been revolutionized over many years, but they had to start from somewhere. Here we take a look at the evolution of train speed; from the very first trains, where it all began, what went right, and of course; what went wrong.

Richard Trevithick, a British inventor, and mining engineer pursued the idea of steam engines, thus creating the first steam tramway locomotive. The steam engine only possessed one cylinder which saved weight and space, the engine was also so small that it was able to work successfully even with a carriage attached to the back.

An excellent revolution for transport! However, this form of transport could only go 5 mph; and it caused the death of 4 men when the engine exploded! The cause of this disaster was blamed on the high pressure and the condensing of the steam.

A few years on in 1925, George and Robert Stephenson created the ‘Locomotion No. 1‘ or known as the ‘active’. This steam train had been adapted with two-cylinder engines and coupling rods, this made the train run smoother and move faster increasing to 15 mph.

Quite clearly the yearning for the faster and better was showing up; and it was the Americans, obviously, that produced the very first authentic steam train. This was the first train managing to reach 60mph back in 1848.

The steam-powered engine ruled the 19th Century until the rising power of electric and diesel took over. The first electric train became apparent in Germany in the year 1879. The electric engines were more efficient and had obvious benefits for the environment; these facts were not yet notified, but the train could travel considerably faster to over 150 mph!

The progression of mankind’s knowledge has increased our ability to get to places much faster; 460kmph is now the fastest train in the world. ‘The Japanese Bullet Train’ was first used to carry goods right across Japan, yet seeing the speed and efficiency of the train; it is now one of the most popular forms of transport across the country. High-speed trains have fled now into Europe and America, however, they do not even compare to the Bullet.

The evolution of speed is not merely about being beneficial and aiding our planet it is, in fact, saving us money and simply getting us places more easily.