Home » Movies » The Evolution of Pepper Potts: A Look Back

The Evolution of Pepper Potts: A Look Back 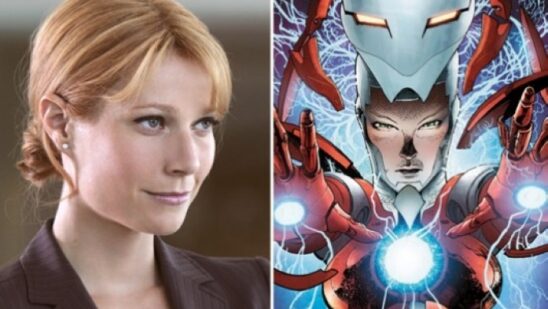 One of the most exciting superhero movie series of recent memory is the Iron Man Trilogy. While many are drawn to the namesake lead character, Iron Man, also known as Tony Stark, played by Robert Downey Jr., its most interesting character is arguably Pepper Potts, played by Gwyneth Paltrow. Here today we are going to specifically focus on the evolution of Pepper Potts in great detail. It’s through Pepper Potts that we learn the most about the person inside Iron Man.

Iron Man/Tony Starks’ evolution from a pampered playboy running his late father’s empire and selling arms to a… well, a pampered playboy with the most powerful war machine on the planet hasn’t revealed much emotional growth in the man. While he has a good heart — even if it is powered by an arc reactor, — he’s little more than a juvenile and, more often than not, he acts like a delinquent. Even though he was a child prodigy, his intellectual prowess served him poorly with respect to maturity.

To many, Stark’s only saving grace is the stunning and brilliant redhead Pepper Potts. Unlike Tony, Pepper has evolved over the last two sequels. From naive and twitterpated assistant in the first movie to a company director and girlfriend in the second and finally, to a pseudo-maternal figure, Miss Potts has done more than just advance her career, she has evolved emotionally, something Tony never seems to do. He’s simply interested in the next “sexual conquest” and playing with his man toys.

Who The Pepper Potts Was

In the original Iron Man, Pepper showed us exactly why Tony depended so heavily on her management skills and guidance. She made an effort to remain ever-so-conscious of her place, his personal assistant while taking care of every important detail in Tony’s life, those that he didn’t find interesting enough to take care of himself. She wasn’t a maternal figure. She was the manager of his life, but she gave him free rein with respect to his personal decisions.

However, it became evident early that she had feelings for him that went beyond their professional relationship. And it turned out, that Pepper wasn’t alone in her sentiments. Upon his return from a cave in the Middle East, a place he only survived as a result of his brilliance and the help of an equally intelligent scientist who was also being held hostage, Tony realized just how important Pepper Potts was to him on a personal level.

While the groundwork was laid out in the first movie, we saw the romance between Tony (portrayed by Robert Downey Jr.) and Pepper blossom and become a centerpiece of the plot in Iron Man II. While Tony shows his affection by constantly flirting with Pepper (though unfortunately, not only with her). Pepper continues with her pleasantly-delivered daggers. At Tony, yes, but particularly at the women, he shows interest in.

At the social event announcing Pepper’s promotion to CEO of Stark Industries, Tony’s, “least favorite person,” Justin Hammer brags to the two of them about the big magazine spread that ex-fling Christine Everheart is doing on him for Vanity Fair Magazine. Pepper replies:

“well, she did quite a spread on Tony last year.”

Tony — ever the comedian — cuts in and says:

“and she wrote a story about as well that was also very good.”

It’s these barbs that make it clear just how much she loves Tony.

Oddly enough, even though he said:

“you are all I have too Pepper”

in the first movie, they didn’t consummate their relationship until well into the second movie. It wasn’t until he faced the real possibility of death that he realized he was taking her for granted. But, once he realized the plutonium in the arc reactor powering his heart was killing him, he came to his senses – the realization that he loved her – and confessed his feelings.

The evolution of Pepper Potts is most evident in her relationship with Tony. While she always remains dignified, she begins to find less and less humor in his antics and tells him so. In the first movie, like a child, she seems wounded when Tony puts himself at risk. Tearfully, she tells him:

In Iron Man II, Pepper’s grief over his risky and juvenile behavior is exhibited in much the same fashion an adolescent would show disapproval and anger. She constantly fights for his attention. Not just romantic attention, Pepper fights to get Tony’s attention because she sees the destructive path he is on and she is afraid for herself, the company, and especially for Tony.

In Iron Man 3, it is apparent that she is fed up with his loose-cannon mentality. For the first time, in an act of great maturity, she puts herself ahead of Tony. She has finally had enough of his childish behavior — like the giant stuffed bunny rabbit birthday present for example. Rather than cry and rather than become angry with him, she (and justifiably so) creates distance between herself and him.

While their love grows ever deeper, Tony’s actions never seem to change. His character doesn’t evolve. Pepper’s reaction to his behavior does, however. Given the trend of Pepper’s growth, one has to wonder if Tony will finally do something so suicidal and detrimental to them both that she leaves. Will there become a point when Pepper no longer trusts Tony?

Gwyneth Paltrow was recently interviewed by the Sun-Times and pointed out that in the comics, Pepper Potts:

“becomes Rescue… and her own person.”

If Tony can’t prove that Pepper is more important to Tony than Tony’s ego is to Tony, Iron Man may find himself without the only person that truly loves the man inside the machine.