Home » Gaming » The Best Ubisoft Games of All Time

The Best Ubisoft Games Of All Time 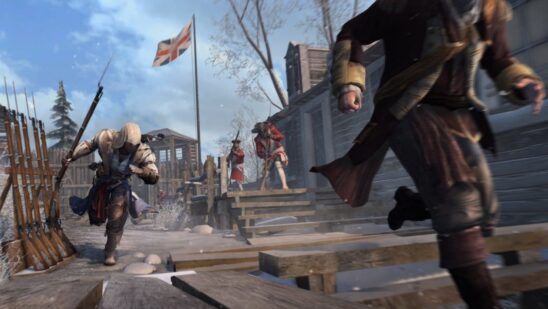 The video game industry is one of the fastest-growing industries considering the current clouded global economic climate. Delivering double-digit growth rates and more than anticipated financial metrics, the video gaming industry is en route to becoming the most sought media industry. The growth is fueled by the advent of advanced game development technologies and radical gaming consoles. The gaming industry has existed since the early 1950s and has been occupied by pioneers like Electronic Arts, Activision Blizzard, Konami, and Ubisoft. These video gaming giants collectively have developed and released some of the best video games available in the marketplace. On the subject of best games, the Ubisoft game portfolio comprises a collection of hugely successful games. Based in Montreuil, France, Ubisoft is the third-largest independent game publisher in the US. Its brand portfolio comprises popular games such as Assassin’s Creed, Just Dance, Rayman, Far Cry, Prince of Persia, Rabbids, Just Dance, and more. From its first game Zombi in 1989 to its latest video games such as Ghost Recon Future Soldier and The Expendables 2, Ubisoft to date has developed a range of action, adventure, sports, and simulation games. Ubisoft’s games are compatible with PCs, iOS devices, and gaming consoles such as PlayStation, Xbox, and Nintendo. Based on their reception and aggregate review scores, we have listed below the best Ubisoft games of all time:

Released in October 1999, the Rayman 2 – The Great Escape was reported to have raised the visual presentation standards in games and action control options like jumping, collecting items, and bopping. Though the main character was portrayed without a neck, arms, and legs, the game was deemed to be intriguing and challenging by most audiences.

The game was honored as the IGN Dreamcast Game of the Year in 2000. The game featured interactive gameplay, along with captivating audio and graphics controls.

Prince of Persia – The Sands of Time

Released in November 2003 as part of the popular Prince of Persia video game series, The Sands of Time version captured the mechanics of the chief character and carried it to the next generation.

The game received widespread plaudits for its storyline, game mechanics, and visual design. Compatible with PlayStation 2 and PlayStation 3, The Sands of Time was voted the PlayStation 2 Game of the Year in 2003.

Released in March 2004 for Microsoft Windows, Far Cry received rave reviews from most gaming analysts. The game sold close to 750,000 units in the first four months of its release. Popular game reviews websites like GameRankings and Metacritic gave Far Cray an average aggregate score of 89.47% and 89/100 respectively.

The game featured long-view and draw-distance options while incorporating advanced rendering systems as additional features. Due to its global success, Ubisoft followed it up with a series of sequels and spin-off versions.

Launched as a sequel to the popular Assassin’s Creed action-adventure video game, Assassin’s Creed II was released in November 2009 with improved game design and graphics. This game received widespread positive reviews with an official Xbox magazine tagging it with a score of 9 out of 10.

In the first week, the game sold over 1.6 million copies around the world. And it was selected as the Game of the Year in 2010 by popular magazines such as Eurogamer, The New York Times, and GamePro.

Tom Clancy’s Splinter Cell Conviction is an action-adventure multi-player video game that is compatible with Windows, Mac, and iOS. Released in April 2010, the game garnered an average review score of 8.5 out of 10 taking into account the review scores given by close to 12 game review websites.

The game featured rapid-pacing fights along with first-class cooperative mode and excellent visual graphics. This game turned out to be one of the hugely successful games in the Splinter Cell series.

Beyond Good and Evil

This 2003 action-adventure game with its amazing high-end graphics at the time earned universal critical acclaim and many awards. Beyond Good and Evil showed the true potential of the gaming platforms of that time. Although tragically it failed commercially upon its release its extremely favorable reviews have caused the title to be revived.

Beyond Good and Evil 2 is currently in development and is slated to be released for the next generation of consoles.

This 2012 third-person survival horror became an instant classic thanks to its unique, dark, and oppressive atmosphere. Although I am Alive garnered average reviews but it topped many sales charts and became a big commercial success.

The game added some exciting new gameplay elements in the survival horror genre such as stamina management, hidden resources and paths, and multiple combat tactics.

The game earned average reviews and got ridiculed universally for its requirement of constant internet connection which was simply too annoying for the users. Tom Clancy’s H.A.W.X. 2 however is still considered an adrenaline raiser and a classic in its own genre despite being a moderate commercial success.