Home » Interesting » 5 Most Beautiful Libraries in The World

5 Most Beautiful Libraries In The World

Libraries will always hold a special place in the heart of bibliophiles and non-bibliophiles alike. We walk their hallways with reverence and admiration, knowing how much knowledge, history, and art are preserved within the pages of the books that line their walls. The buildings that house these great books must do justice to the poets, philosophers, and writers whose works live within their halls. Most of us are more familiar with modern libraries like USC that house books and ebooks alike. They are very functional for our everyday needs. But these libraries in this list are historic icons that are preserved for the centuries ahead. Although some may disagree on what exactly makes one library more beautiful than the next, these libraries have topped the lists at Huffington Post, Flavorwire, and more, due to their astounding collections and breathtaking architecture. From the award-winning Vennesla Library and Culture House in Norway to the world-famous, centuries-old Strahov Monastery in the Czech Republic, around the world, there is no lack of extraordinary libraries designed as an architectural tribute to the written word. Here are the top five most beautiful libraries in the world:

This historic library, designated by English Heritage as a Grade I listed building, has a combination of Tudor Revival and Modern Movement styles. Due to a slope in the land, it was built on, from the front side, it appears to have five stories and from the back, it appears to have three.

Once you enter the building, you are greeted by marble floors, a turquoise glass mosaic, and large classical arches framing the collection of British and world literature housed inside.

Designed with Japanese minimalist nature in mind, this library nixed complex architecture in order to make the most of the natural light and available space.

The result was stunning: a simple structure that brings a reflective and meditative environment to the library, perfect for dedicated readers to unwind with their favorite book in hand. Built in 1887, this four-storied library is not only an architectural splendor with its sweeping skylight, stained-glass cupola, and breathtaking chandelier but also houses 350,000 volumes available for public use.

With the largest collection of Portuguese works and many rare 17th and 18th-century books, visitors from around South America come to this library to enjoy the beauty of the surroundings and immerse themselves in the historic works. Since its completion last year, this Norwegian building has already won a handful of architectural prizes for its unique design.

The glue-laminated timber arcs that support the roof have caused many critics to say it too resembles the ribs of a whale, perhaps bringing to mind the famous book Moby Dick. 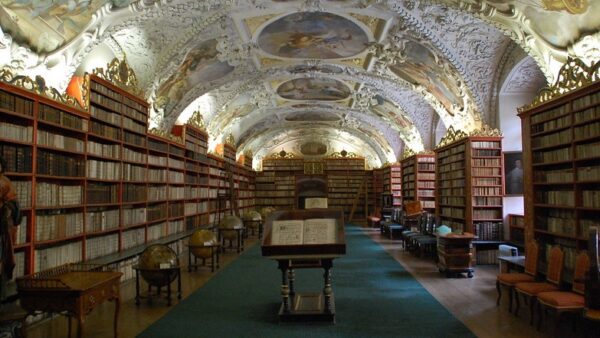 This magnificent monastery-turned-library dates back to the 12th century and is steeped in religious and national history. It houses rare books, Baroque libraries, ancient manuscripts, theological texts, and furnishings from Louka Monastery in Moravia.

Murals by Franz Anton Maulbertsch and Siard Nosecky, a Strahov Monk, are just some of the fine artwork pieces that can be found around the library. Every year thousands of tourists flock to this library, making it one of the top attractions in the city.

Did you like our list of the most beautiful libraries in the world? Let us know your thoughts in the comments below!