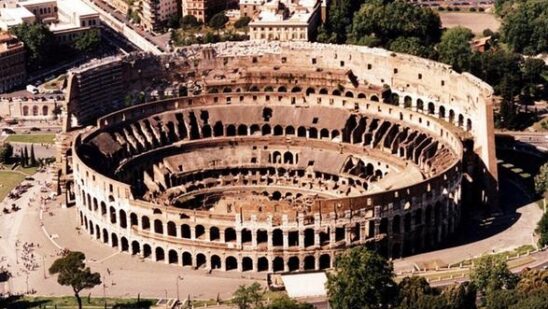 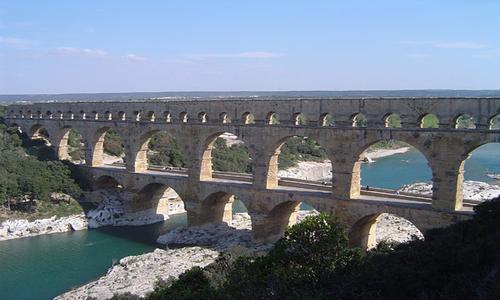 The Roman aqueduct system that delivered clean water from mountaintop springs into cities for use by the public was one feat of engineering that set Rome apart from other ancient civilizations. A few sections of the ancient aqueduct exist in the city of Rome, but the most spectacular surviving examples are in France and Spain.

The Pont du Gard, a section of the aqueduct with three layers of columns and arches, is a popular landmark and tourist attraction in southern France. The Pont du Gard was constructed of brick and concrete around the middle of the first century A.D. and was used to transport water to the city of Nimes. 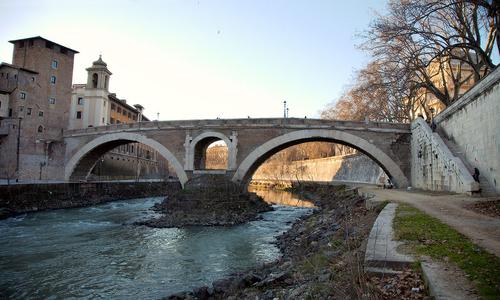 The oldest bridge still standing in Rome, the Pons Fabricius was constructed across the Tiber in 62 B.C. The structure is made of travertine stone and brick and consists of two large arches that span the river with a smaller connecting arch in the middle.

The stone bridge replaced an older wooden bridge and is still used for foot traffic today.

4. The Amphitheater at Nimes 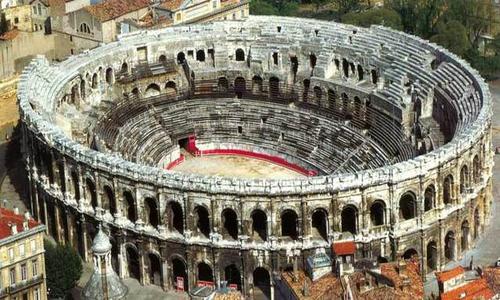 Constructed in the style of the Colosseum, the smaller amphitheater in the Roman city of Colonia Nemausus, now Nimes, France, was built around the same time as its larger Roman counterpart and was used in a similar fashion to hold public games and festivals.

The structure fell into disuse and homes were constructed inside it during medieval times. In the 1800s it was cleared and restored for use as a bullfighting arena, and it is still used for bullfights and concerts to this day. 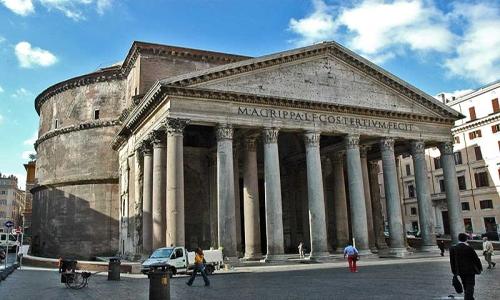 Rome’s tribute to all her gods and goddesses, the Pantheon was the largest unsupported dome in the world for over 1200 years until being supplanted by the dome of Florence Cathedral in the 1400s. The concrete dome of the Pantheon is around 140 feet high at the center and is about the same distance across at the base.

The concrete gets thinner at the top, and lightweight volcanic rock is used as aggregate to decrease the weight. The coffered ceiling also reduces weight. The building has been a Christian church since around 600 A.D. and is the burial place of Italian royalty and public figures. 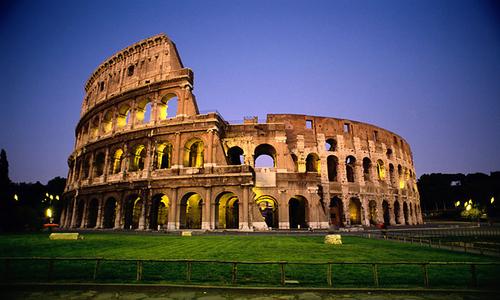 No list of impressive ancient Roman buildings would be complete without the Colosseum, commissioned by Emperor Vespasian between 70 and 80 A.D. As impressive as it is today, much of the Colosseum’s exterior façade was looted for use in later construction projects including St. Peter’s Basilica.

With wide, evenly spaced columns spanned by arches that spread the weight of the building while allowing easy access for up to 50,000 spectators, the Colosseum is the model for today’s modern sports stadiums. 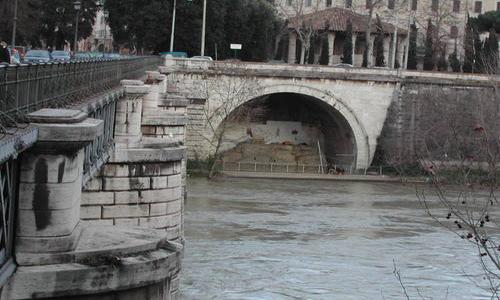 The exact age of the Cloaca Maxima, Rome’s great sewer system, is hard to pinpoint. Some parts are estimated to be over 2600 years old. Originally an open sewer designed to divert stormwater to the Tiber River, it was eventually enclosed and used as a drain for public baths and lavatories as well as stormwater.

Some portions of the Cloaca Maxima are still in use, much as in ancient times, as part of Rome’s stormwater collection system.

Did you like our list of the top ancient Roman buildings that still stand? Let us know your thoughts in the comments below!