Home » Kids Section » Should Cell Phones Be Banned in Schools?

Should Cell Phones Be Banned In Schools? 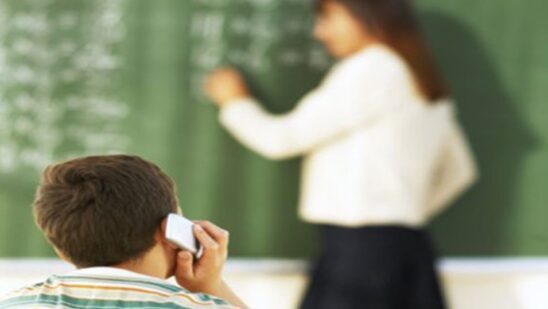 It can be hard for parents and teachers to see the need for cell phones in the classroom. In fact, many would claim that they are more of a nuisance than good. However, is this true? While students may use cell phones for bad reasons, cell phones might actually save a child’s life. Does this leave wondering whether cell phones be banned in schools?

There are a number of problems caused by cell phones. Cell phones have been used to cheat on exams for over a decade, but thanks to the introduction of smartphones, students can now cheat in a number of different ways. It might be taking pictures of exams, texting answers to fellow students, or using the internet to search for answers.

Other than cheating, teachers often find it hard to teach when students are playing games, texting, and using their cell phones for other activities. Is there any reason why cell phones shouldn’t be banned?

Situations Where a Cell Phone Can Be a Lifesaver

The cold hard facts are cell phones have saved lives in a variety of situations. Students used cell phones to call policemen and parents during the Columbine shooting and even the shooting at Virginia Tech.

In other words, cell phones may be a student’s only source of help when it comes to a dangerous situation. Students may even use cell phones to escape a bullying situation.

Can there be a compromise? It’s easy to see that mobile phones are important for student’s safety, but they are often used in negative ways. One way to help prevent the problems that cell phones cause is to simply not allow students to use cell phones during class.

If a student is caught, there should be strict punishments to help reinforce the rules. Another compromise is to only allow cell phones that simply make calls and nothing more.

Cell phones are often used for no good, but that doesn’t mean cell phones should be banned in schools. Students have the right to be safe and sometimes a cell phone may be their only option. The key is to set rules about the use of cell phones and apply strict punishments when those rules are broken. This way, the student population has the ability to call for help but will be less tempted to use them for inappropriate activities.