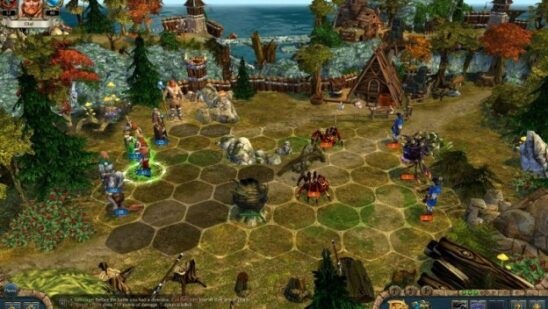 King’s Bounty: Warriors of the North is the latest installment in the King’s Bounty gaming series. It is a great Role Playing Game (RPG) that provides a great deal of action and adventure and has been quite a popular series among PC gamers.

The original King’s Bounty was released in 1990. Over the years there have been several adaptations, but the main setting for it has remained the same. Knights, dragons, medieval sword fights, magic, and fun challenges. It has been a widely popular series of games in the RPG world.

The concept of the game is rather basic but extremely challenging and fun. Your hero, a knight hired by the king, is sent out to track down a magic scepter. The scepter must be acquired before the king dies or you fail in your mission. You will have to collect pieces of a map in order to acquire the location of the scepter.

The major challenge is to collect one of these pieces as you will be required to battle and defeat the villain in order to gain the piece of the puzzle that it holds. The villains will become increasingly more difficult to vanquish with time, and you are always on a race against the clock.

There are hidden bonuses and upgrades that you can track down along the way. These upgrades will give your hero more abilities and make defeating the villains a little bit easier.

Warriors of the North

Warriors of the North have the same RPG feel, but a very different storyline. Instead of battling villains that you would normally encounter during medieval times you will be battling the undead this time. Instead of building a map in order to acquire a scepter before the death of the king your goal will be to rid of all of the undead creatures running around and trying to take over the land.

The gameplay is more concentrated on the action and the battles that will go on between your character and the undead.

The game is staged in a part of Endoria which has been featured in previous versions of the King’s Bounty, but Warriors of the North features is a brand new area of Endoria which you haven’t explored previously in any title.

It is Viking territory so be prepared to see a lot of fur and horned helmets and your character battles to defeat the undead and help the land return to its former glory.

Overall the game is entertaining. It is considered to be part of a “cult” franchise in indie RPG. It has decent graphics, a somewhat entertaining storyline, but the thing that draws you in is the gameplay itself.

Most gamers will tell you it is the type of game that you plan to play in your spare time, but it draws you in and challenges you to the point that you do not want to give up, take a break, or turn off the computer.

The gameplay is slightly cheesy in the way that it plays homage to some of the old classic movies such as the zombie movies or when the dead simply come back to life. Honestly, who could resist an RPG where the goal is for a Viking to battle the undead?

We highly recommend this game for all pc gamers out there!