Home » Kids Section » Is The Internet Making Your Child Grow Up Too Fast?

Is The Internet Making Your Child Grow Up Too Fast? 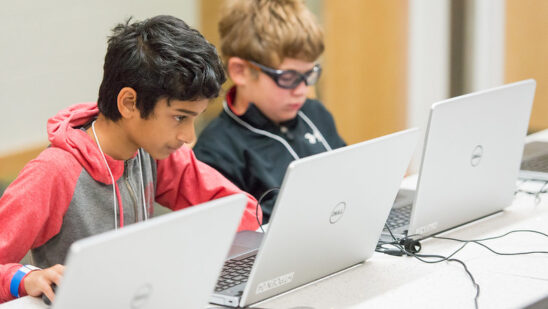 Children today grow up in an entirely different world than they did even just fifteen years ago, and it’s because of the Internet. Computers and the Internet are such an integral part of society now, and kids grow up using them. Children are tech-savvy and rely on the Internet to find all the information they seek and communicate with their friends. Lots of parents are concerned about the dangers of Internet use, and they’re certainly justified. There is so much age-inappropriate material, and the use of social networking sites is much different than in-person interaction. While it’s incredibly important for children to learn to use computers and the Internet, it’s also essential that they do it safely. Lots of children these days are wise beyond their years, and the Internet may be to blame. Is the Internet making your child grow up too fast?

The things that your child sees on the Internet, such as articles and photographs, are often meant for adults. When children are exposed to material that is intended for an older audience, it can affect the way they view the world and themselves. For example, information about celebrities can give children a skewed perspective of reality.

Since they’re younger than the intended audience, they aren’t able to discern normalcy or see the whole picture. This will greatly influence their views on the world and society. They’ll think of themselves as more mature, for example, when really they are unable to accurately process adult information.

If children can easily access adult sexual content, they’ll know much more than they should at their age. They also have the ability to look up the answers to any questions they have about sex, and this can lead them to learn more than they really should, or even get inaccurate information. Instead of going to a parent or teacher, they’re learning about sex from the Internet.

With the popularity of social networks, children are able to express themselves in so many more ways than they traditionally could. They can create and share statuses, comments, photos, videos, and even write a blog. All of these creative outlets have the potential to be misused by children who aren’t aware of the boundaries of what is acceptable to post online or the true scope of the visibility and permanence of what they post.

The ability to have a channel for their creativity can be incredibly positive in many ways, as it helps children to develop their voice and confidence. By asserting their independence online, they’re developing their personality and character very quickly. They may end up playing a role and trying to fit the character they create for themselves with their online personality.

If you’re afraid the Internet is causing your child to grow up too quickly, do what you can to encourage them to log off and spend less time online. Forcibly limit the amount of time they use the computer if necessary, but try to help them see the benefits of more traditional childhood activities like playing outside or going bowling with their friends.

The change of pace will help them just be kids and regain their youth without the allure of the adult world that exists beyond the computer screen.