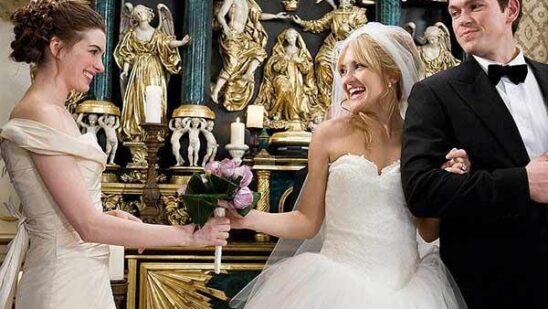 Brides and bridesmaids are or should be, close friends. There is so much preparation, organization, and arrangement to do for a wedding that lots of trust are placed on both sides. It’s good for the friendship of all concerned to take time out to enjoy each other’s company and what could be more in tune with the topic on everyone’s mind than watching a wedding-based comedy? Here are 5 of the best wedding movies to watch this weekend:

Who thinks about the parents of the wedding couple, either on the big day or during the run-up and preparations? With the comic flair of Steve Martin, this movie, which also stars Diane Keaton as the mother of the bride, puts the focus on the father as he struggles to come to terms with losing his daughter to her new husband.

Brides and bridesmaids will enjoy watching this together, not just for the good fun of sharing a laugh, but also for the reminder that the big day affects everyone involved in different ways.

A firm favorite with everyone who’s seen it, Mamma Mia, starring Meryl Streep, Amanda Seyfried, and Colin Firth, tells the story of a bride’s quest to find her father so he can walk her down the aisle. She secretly invites three men from her single mother’s past, invoking all kinds of chaos and memories, some good, some not so good.

This is a lovely, romantic, and very funny musical film to watch.

Getting married at the same time as your friend may seem like a good idea, but as this film shows, rivalry can crop up amongst the best of friends. Starring Kate Hudson and Anne Hathaway as the two friends competing to throw the best wedding, Bride Wars is a funny film for real-life brides and bridesmaids to watch together.

At least it’ll show you what not to do if you want to avoid some of the fights that ensue between the two brides in the film.

Starring Julia Roberts and Dermot Mulroney, My Best Friend’s Wedding is an unlikely comedy. Julia Roberts wins the day as the woman whose college boyfriend gets engaged to someone else. She sets out to sabotage their wedding by fair means or foul, getting into various hilarious situations in her quest to win back the man she realizes she still loves.

It’s a great movie to watch, sharing the gamut of emotions from lost love and jealousy to rivalry and general misunderstandings.

Of all the wedding-related movies for brides and their wedding parties to enjoy in the days leading up to the wedding, perhaps this one is the best. Not only is it very funny, but it is all about the relationships between the main women in the wedding party, how the wedding affects all their lives, and some of the challenges they face as they get ready for the big day.

Apart from having a good laugh and strengthening the bonds of friendship, best wedding movies such as these also stand as gentle cautionary tales, as they deal with emotions many people feel on the occasion of a wedding.