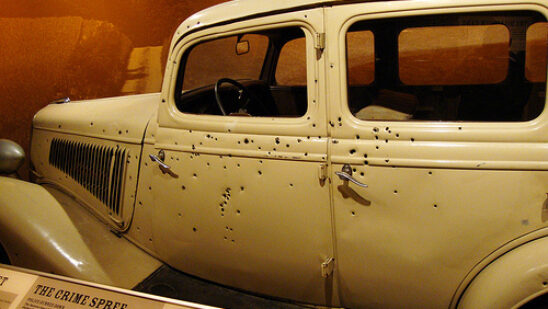 Now and then we all have issues with our cars, but if you’re planning a caper, you need to make sure you have a suitable getaway car in place when it’s time to make your escape. Apparently, some dumbest criminals missed class the day they taught that lesson. Here we take a look at some stupid criminals and their poor getaway car choices:

1. Should Have Driven the Subaru

Alleged small-time crooks Matthew Swaggerty and Timothy Marrison of Volusia County, Florida were stealing from homes and cars in and around the city of Darby and loading the loot into their 1995 Chevy Camaro. Now, the Camaro is a great car, especially when you want to beat everyone off the line at a stoplight. However, it’s not what we’d call a mudder.

The hapless duo got their muscle car stuck in Florida muck. No problem. They just decided to steal a shovel from a nearby home and dig it out; that’s when the cops rolled onto the scene.

Lesson #1: Use an AWD vehicle as a getaway car in tropical Florida. Lesson #2: Don’t steal iPhones that have the GPS “phone finder” app installed.

The most spectacularly unsuccessful getaway car of all time is the 1934 Ford Model 730 Deluxe Sedan driven by the infamous Bonnie and Clyde. If you’d like the see the bullet-hole-ridden vehicle, it’s at Whiskey Pete’s, about 40 miles southwest of Las Vegas, Nevada. Admission is free.

The couple stole it from Ruth Warren of Topeka, Kansas. It featured a number of upgrades, including an Arvin hot water heater and safety glass windows. However, it could have used a little armor plating reinforcement…for the safety of the driver and passenger.

3. Any Car is Better Than None

Thank God the United States doesn’t have a monopoly on stupid criminals…and at least ours have cars! A pair up in Canada robbed a store in Toronto sans getaway vehicle. Quelle Horreur! Upon leaving the store with their loot, they began to appreciate the handicap of trying to make a getaway on foot, so naturally, they called a cab.

The cops were tipped off and met the cab so that when it cruised in to pick up the fare, there was a law enforcement officer behind the steering wheel. We understand the thieves tipped quite poorly. However, we have a tip for them: Steal a car first next time!

4. Try a Car With an Actual Motor

Police caught up to a guy in Germany after he stole some loot from a camera shop. A quick thinker, the criminal hopped into a nearby pedal cart and started making his getaway alongside a canal.

Realizing the futility of trying to outrun the cops in a pedal cart, he upgraded to a bicycle. Alas, despite his ability to maneuver, in the end, he was no match for the police helicopter.

Maybe 24-year-old Erick Henson was trying to recapture his lost youth when he rented a white, Humvee stretch limo that night in Topeka, Kansas. (This is the second mention of Topeka. Coincidence? We’ll let you decide.) However, he should have just used it as a place to drink and pass out, instead of drinking, robbing a Kwik Shop, and then passing out in it, as he was accused of doing.

It wasn’t too hard for the local cops to track the ivory-white, oversized Schwarzenegger mobile. And, in his intoxicated state, apparently, Henson wasn’t too anxious to see if he could outrun the Topeka police.