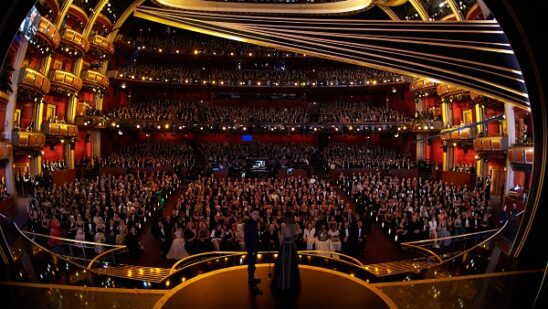 Considered as the most decorated annual event of Hollywood, the Academy Awards celebrate the absolute best performances across various realms of the talent it takes to make movies of the previous year. Held at the Dolby Theatre, this year’s Oscar ceremony was filled with tear-soaked surprises and jaw-dropping shocks.

Similar to the previous year, the prestigious ceremony did not have a host yet that did not halt the festivities. From stellar music performances to surprising upsets, the event was a roller-coaster of emotions. This year’s ceremony would be truly remembered for South Korean black comedy thriller Parasite as it not only won for Best International Feature but also for Best Picture, Best Director and Best Original Screenplay.

Perhaps the most obvious winner in the entire ceremony was none other than Joaquin Phoenix. The victory was long overdue as the actor had been previously nominated three times but always came up short. Following the mess that was made by Jared Leto’s portrayal of the Joker, Warner Bros. made the smart decision to reboot the character and made a fine choice by having Phoenix star as the Clown Prince of Crime. Ever since the release of Joker, predictions regarding phoenix winning an Academy Award for Best Actor flowed like a tidal wave and it truly was a much-deserved victory.

Apart from Phoenix, other expected winners were Renée Zellweger for Best Actress and Laura Dern for Best Supporting Actress. Both actresses stood victorious in the ceremony.

Among the greatest actors who have never won an Academy Award, Brad Pitt was undoubtedly the most deserving one after Leonardo DiCaprio. A veteran with an acting experience of more than 30 years and previously nominated three times (for acting categories), the actor finally won an Academy Award for his outstanding portrayal of Cliff Booth in Once Upon a Time in Hollywood.

The expected big winner was World War I flick 1917 and even though it did not succeed as predicted, it did manage to win three Academy Awards for Best Sound Mixing, Best Visual Effect, and Best Cinematography. Even Ford v Ferrari won some gold as it bagged awards for Best Sound Editing and Best Film Editing.

Alone in the darkness was none other than The Irishman. Unfortunately, director Martin Scorsese’s gangster epic failed to win even a single Oscar from its 10 nominations. Released on streaming service Netflix and watched by 26.4 million registered users so far, the movie starred Robert De Niro, Joe Pesci, and Al Pacino. It had been 9 long years since critically acclaimed director Martin Scorsese did what he does better than any other film-maker – crime movies. Initially predicted to be the top contender of this year’s Academy Awards ceremony, its mystique soon faded.

However, Scorsese was given a shout-out from Chris Rock and Steve Martin on stage. Additionally, Best Director winner Bong Joon-ho revealed that when he was an aspiring film-maker, Scorsese was among his inspirations; causing the audience to roar in applause.

Fellow director and industry veteran Quentin Tarantino also did not win an Academy Award but his movie Once Upon a Time in Hollywood stood triumphant in winning Best Supporting Actor and Best Production Design.

Here is a complete list of 85th Academy Awards winners:

Joaquin Phoenix for Joker in Joker

Marshall Curry for The Neighbor’s Window

Matthew A. Cherry for Hair Love

Elton John for (I’m Gonna) Love Me Again from Rocketman

Mark Taylor and Stuart Wilson for 1917