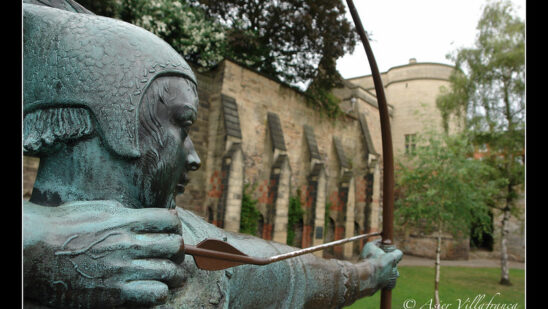 The way movies tell it, Robin Hood was the first “Chugger”, with his stealing from the rich to give to the poor shtick. However, if you go back a bit, Robin Hood was less like a medieval Bono and more like an actual outlaw, in that he killed a bunch of people and stole stuff. There are references to him giving money to the poor, but the earliest of them appear in the 17th century, so for at least a couple of hundred years before that the legend of Robin Hood was just about somebody who really liked to nick stuff. You should have been expecting that, really. Thieves and bandits are out for themselves and nobody else, right? You just don’t get people like that in the real world. Y’know, apart from these modern Robin Hoods who were more Robin Hood than Robin Hood:

For two years Pasquale D’Angelo was full-time involved in jobs with charities in Italy. His colleagues would later describe him to local newspapers as a “very good and altruistic man” while noting his behavior had become erratic following the death of his mother.

Not long after this Pasquale walked into the Cassa di Risparmio with a toy gun, where they handed over £1,900. Then he gave that money to the homeless.

Nine days later Pasquale brought a toy gun into a local branch of Banca Nazionale di Lavoro and took them for €3,500 (£2,640). He went from the bank to a nearby bar, because robbing people is thirsty work, but once he got there he started giving away his loot to the poorer customers. He then went to a butcher’s, a fruit stall, and a hair salon, giving the money away as he went, before being arrested on his way to church.

Of course, this doesn’t sound so much like Robin Hood as someone who had serious mental health issues. That sounds believable, but for it to be movie-level stuff you’d need your hero to be some sort of master criminal, outwitting the cops at every turn, right?

But that would just be silly.

Nikos and Vassilis Paleokostas have been responsible for numerous armed bank robberies, as well as several kidnappings for ransom. Throughout their lengthy criminal careers, the two men have never killed anyone, and have built a reputation for sharing their loot with the poor.

Police in Greece is celebrating the capture of the country’s most wanted man, who has the reputation of being something of a Robin Hood figure – the point where a £500,000 reward for one of them went unclaimed because the locals just loved them too much.

This on its own would earn them a place in the list, but that’s only the start of why it’s only a matter of time before someone gets the movie rights to these guys.

For instance, there is the fact that they have escaped twice from a maximum-security prison, by being ‘rescued by helicopter’. On another occasion, the police nearly had Nikos in a car chase when his tire blew out and he escaped into the woods.

Seriously, Hollywood, get on this!

Even here though, these guys were professional criminals, so they might have shared the loot to buy people’s silence, but the Robin Hood of the movies was trying to overturn the corrupt powers that be! (Even if the movies forget he was trying to replace one King with another equally not-elected King)

By day Ilmārs Poikāns was a researcher at the University of Latvia’s Institute of Mathematics and Computer Science. At 31 years old he had a wife, kids, and a respectable job. And by night he would break into the computers of banks and government-owned companies, then hand over the classified information he found to Latvian TV.

Working under the name “Neo”- because being a badass super hacker doesn’t mean you have much of an imagination, Ilmārs laid his hands on the payment details of managers from Latvian banks who’d been bailed out and revealed that they hadn’t been taking the salary cuts that they’d promised. He also revealed that state-owned companies had been secretly awarding bonuses while asking the government for help.

Some speculated that “Neo” was actually working from Britain because apparently, Latvia doesn’t have much faith in its own hackers.

TV stations in Latvia were in a tricky position. On the one hand, media companies can’t really be seen to promote a “pro-criminal” stance. On the other hand, this guy was frickin’ awesome!

“On the one hand, of course, he has stolen confidential data… and he actually has committed a crime, But at the same time there is value for the public in the sense that now a lot of information gets disclosed and the whole system maybe becomes a little more transparent.”

Eventually, he was arrested, but the story doesn’t end there. Not long afterward his supporters were demonstrating in front of Latvia’s government headquarters with slogans such as “Catch the real thieves” or “Latvia has smart and honorable felons” on the pavement.