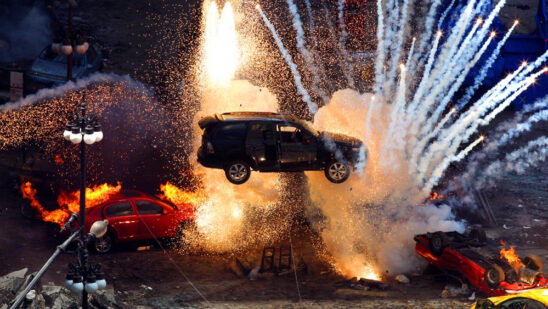 Hollywood movies are known for going over the top with special effects and many times have large budgets with money dedicated specifically to the purchasing and destruction of cars. Some of the stunts and chase scenes in blockbuster movies are downright outrageous, featuring violations of the laws of physics and monetary damage totals in the millions. Here are some of the most ludicrously over-the-top Hollywood car crashes:

As the breaker of the record for most cars wrecked in one movie (formerly held by the Blues Brothers), G.I. Joe: The Rise of Cobra makes a spectacular show with over 112 cars that were destroyed in the production of the movie.

You can’t have a conversation about outrageousness and car crashes without discussing the Transformers movies. What is cooler than thrilling car crashes?

While the spooky crash scene involving an 18-wheeler carrying lumber is not the most expensive or surreal car crash scene ever, it makes the list because of how realistic it seems.

Horror movies are much scarier when horror could actually exist in the real world. Driving behind a lumber truck will never feel the same.

Tornados are powerful forces of nature that are scary enough to turn the manliest men wimpy. You can’t intimidate the wind. This movie is partly a story of man versus nature; aka car versus tornado (hint: put your money on the latter).

With flying cows, trucks, and 18-wheelers, Twister definitely has one of the most outrageous car crash scenes.

For a film that’s all about fast cars and action-packed chases, it is no surprise that Fast and the Furious tops the list. In the movie, a Dodge Charger makes a truly epic jump followed swiftly by a full-body makeover by an 18-wheeler.

Television and movies will continue to outdo previous generations by spending more money or becoming more outrageous. As more movie records are broken, it will be interesting to see the boundaries pushed by future films. Share some of your favorite Hollywood car crashes in the comments.