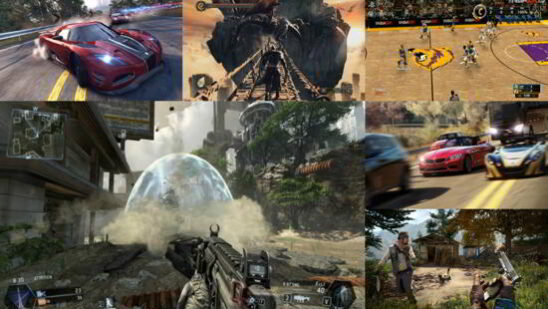 Xbox One is now officially over a year old and already enjoys a fan following of millions. Apart from being the best living room media machine that provides some really clever and fantastic media features, Xbox One also features an excellent range of both exclusive and non-exclusive games. We today have ranked the 17 best Xbox One games of 2014 that ruled the gaming world throughout the year:

The Xbox One exclusive Sunset Overdrive set a new standard for open-world third-person shooters thanks to its brilliant, light-hearted, colorful, and parkourish gameplay coupled with winsome weapons and a cool story.

GTA V, the latest installment from the ever-popular and controversial Grand Theft Auto series offers its open-world glory in a much-improved 1080p (30 frames per second) graphics on Xbox One along with several other enhancements (such as the all-new next-gen exclusive first-person view, thousands of new animations, improved textures, new weapons, new cars, etc).

Apart from being able to control three main characters Michael, Trevor, and Franklin, players can also enjoy the vastly improved multiplayer world of GTA V Online with over 30 other players.

The Crew is an innovative open-world action driving game that allows a real adventure of driving through the roads of the continental United States of America.

After the 2011 hit Dark Souls, Dark Souls II is a highly anticipated sequel that effectively fulfilled its promise of providing an even darker, brutal, and tense role-playing adventure that keeps you on the edge of your seats throughout its 80+ hours of the single-player campaign.

The upgraded and new armors, weapons, enemies, multiplayer, and New Game Plus elements are more than enough to force you to ramble through Drangleic to find a cure for the curse.

With, The Evil Within creator of Resident Evil is back to offer a genuinely frightening survival horror game. The story revolves around a detective named Sebastian Castellanos who investigates a series of gruesome murders at a local mental hospital.

Things soon take an ugly turn for Sebastian when he starts encountering hideous creatures who know nothing other than slaughtering human flesh.

With the use of state-of-the-art face-scanning technology, Visual Concepts has delivered the best-looking basketball game in recent years.

With a fresh MyPlayer story mode and excellent deep gameplay, NBA 2k14 offers an excellent digital basketball experience that no other title can match.

Middle Earth: Shadow of Mordor is a fantastic open-world RPG set in the Lord of the Rings universe. Players take control of a ranger captain named Talion, who wanders in Mordor to wreak havoc on the orcs and uruks that killed his family. Players can either fight stealthily (more like Assassin’s Creed) or engage in all-out melee combat (more like Batman Arkham City) and can take part in several side quests that gracefully complement the main campaign.

The most unusual and the best feature that the game offers (apart from the Talion’s wraith-like powers), is its interesting Nemesis system that upgrades the enemy each time it kills Talion and allows him to recognize Talion once he faces him again in combat in a very dramatic way.

Halo: The Master Chief Collection includes Halo: Combat Evolved Anniversary, Halo 2 (HD), Halo 3, and Halo 4 as part of a massive package targeted at Halo fans on the next generation with 1080p@60fps glory (with some extra stuff like access to Halo 5 Guardians multiplayer beta, additional episodic videos, and new achievements, etc).